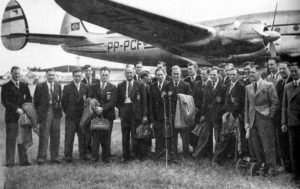 Belo Horizonte or Nice? Which was England’s biggest tournament humiliation of all time?

With the help of Billy Wright and Bert Williams, we think we can help provide a few answers…..and it’s not looking good for Roy Hodgson and his humbled multi millionaires.

England’s World Cup defeat against the United States in Brazil 66 years ago has been held up as the only possible rival to the nightmare that unfolded with our European Championships exit last night, so we thought we would do a little delving to try to gauge how the two experiences compare.

Walter Winterbottom’s men way back when at least had several plausible excuses for being on the end of a result that sent shockwaves through our game.

It was the country’s first time at a World Cup, the tournament was played in totally alien Southern Hemisphere conditions and we set off with the ‘blazers’, in their wisdom, having sent star forward Stanley Matthews off as an ambassador on a goodwill FA tour to Canada instead.

Furthermore, the food in Brazil was so obviously to the players’ detriment that Winterbottom at one time marched into the kitchens and started cooking something less spicy.

It was all so farcical that Winterbottom and Sir Stanley Rous both argued for the inclusion of jet-lagged late arrival Matthews for the game against the US – but were wasting their time trying to convince Grimsby fish merchant Arthur Drewry, the sole selector (no pun intended) and a man who was adamant that the team from the opening 2-0 win against Chile should be retained.

England lost by the only goal against the States but, for all those who witnessed the sight of Iceland coping in considerable comfort with our best efforts, note the words of skipper Wright.

“It was the biggest freak result I ever experienced in my career,” he said in Norman Giller’s excellent A Hero For All Seasons book. “I promise you that 99 times out of 100, we would have won.

“The stadium was still being built and I remember the dressing rooms were so dirty that Walter Winterbottom ordered us back on to the coach and we changed in a sports club a ten-minute drive away.

“This was easily the most frustrating and one-sided international I ever played in. We must have had 20 shots to their one and even their goal was freakish.”

Closer examination of the flow of the game reveals that England struck the woodwork three times, had an Alf Ramsey goal disallowed and saw a free-kick from the same player denied by a stunning save from America’s goalkeeper. 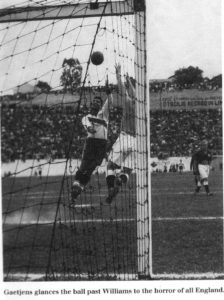 A picture of bemusement….Billy Wright and Bert Williams against the USA.

“We should have scored about ten,” said Bert Williams many years later. “It was just one of those games when everything we tried hit the woodwork, hit the keeper or hit a defender. They had virtually only one attempt and it was deflected in off the back of a head. We could have won 10-1.”

Such claims were understandably absent from the England camp late last night – and not just because Hodgson copped out with a resignation speech that hit completely the wrong note with talk of his ‘fantastic players’.

The country wanted some accountability and explanations, including from the dug-out, so credit goes to an appallingly off-form Wayne Rooney and particularly the errant Joe Hart for at least fronting up and admitting the side had come up so far short.

We were clueless. Wretched. Badly managed and utterly lacking in even the basics of marking, passing, controlling and, in Hart’s case, stopping. As for intelligent creativity….forget it! And what happened to the pre-match hype about us using the wings to open up a well-drilled defence?

This was our darkest football hour. Homeward-bound after only two games of the 2014 Brazil World Cup and now beaten, comfortably at that, by a country Gary Lineker reminded us has more volcanoes than professional footballers.

* England’s defeat against the USA did not spell immediate elimination. They could still have extended their World Cup interest but lost again when facing Spain in their next game.