Keeping Beckham In The Shade

Deano’s Days In The Sun 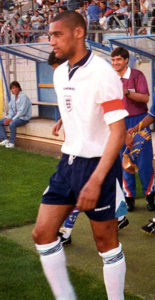 Dean Richards does the honours at Toulon.

It was while he was still at Molineux that Dean Richards used various interviews to neatly chronicle some of the highlights of his Wolves career.

Playing brilliantly against Dwight Yorke in a League Cup tie at Aston Villa ranked high, so did subduing Terry Sheringham in a drawn FA Cup assignment at Tottenham two and a half weeks further into the embryonic Mark McGhee era. And didn’t he keep another of the Premier League’s biggest hitters quiet in a pre-season friendly?

But captaining an England side containing David Beckham and Phil Neville wasn’t too shoddy either.

In the days when a squad from these shores could go to France and actually make a decent impact in an international competition, Graham Taylor’s new Wolves signing was chosen to lead a talented under-21 group in the Toulon tournament early in the summer of 1995.

England had emerged victorious from the venue both just before and just after Taylor’s departure from the national manager’s chair and were hopeful of completing a hat-trick of consecutive successes 21 years ago despite their opening group game being against a Brazil team containing the Middlesbrough favourite, Juninho.

As the on-the-spot Express & Star correspondent detailed to keep a special eye on ‘Deano’ and Walsall defender Stuart Ryder, I was thrilled to glean from coach and Blackburn no 2 Ray Harford on the morning of the first match the fact that he had named Richards as skipper.

The tall Bradford-born defender hadn’t even been named in the squad up to this trip and would be making his England under-21 debut on the same day that Beckham and Neville did likewise – after the first four and two of their Premier League appearances respectively for Manchester United.

A goal in each half condemned Harford’s fledglings to a 2-0 defeat against Brazil on June 6, the side also containing David Watson (Barnsley) – an England goalkeeper coach in recent years – Ryder, Julian Joachim (Leicester), Nicky Forster (Brentford) and Andy Myers (Chelsea).

From that outing in front of 3,000 in Toulon’s main stadium, the England campaign went lower-key as they played instead in nearby towns and victory by the same score against Malaysia in Six Fours on the back of goals from Joachim and Myers came with only 700 spectators in attendance.

Richards had by then been confirmed as skipper for the duration of the stay in the south of France and celebrated his 21th birthday on the trip, Taylor no doubt feeling relief at securing his permanent transfer when it was rumoured that Kenny Dalglish – Harford’s club boss at Blackburn – might be dropping in on the Toulon area for a few days.

England’s progress hinged on the night match to follow against Angola at La Seyne. The attendance was an even more paltry 250 but a sole Forster goal saw the side home, Kelvin Davis (then of Luton) having followed Watson and Norwich’s Andy Marshall in becoming the third keeper used in three matches. 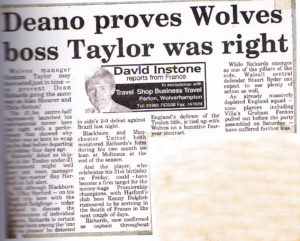 A despatch about Deano.

Alas, there was no happy ending…..England lost 2-0 to France in in the semi-final in Cannes, with Richards, Beckham and Neville as tournament ever-presents. Another Old Trafford graduate, Chris Casper, followed them into the side later in the group stages.

Richards did not add to the four under-21 caps he picked up in that memorable month but would, with add-ons over his four years at Molineux, become Wolves’ record signing.

* Darren Anderton (then with Tottenham) was part of the England squad who won the Toulon tournament in 1993 and Michael Oakes (Aston Villa) figured when their crown was retained 12 months later.