Taylor ‘Selfish’ For Cosying Up To Film Crew – Lawrie 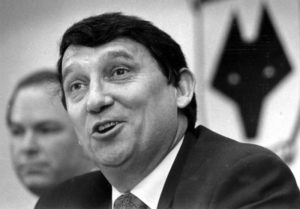 Graham Taylor……on his first day after returning to club football, with Wolves.

We preceded our month-long focus on all things French, international or Euro by saying we would be dipping into Lawrie McMenemy’s autobiography for a second time and thought we would sign off on final day by revealing some interesting thoughts he has aired on Graham Taylor.

The two worked together with England from soon after Italia 90, with the newly-appointed national manager saying that the former Coldstream Guardsman would provide him with some broad shoulders on which to lean in tough times.

Taylor’s journey in the job was certainly a rocky one, although his assistant thinks some of the difficulties were self-inflicted, mainly his decision to commit to the ‘An Impossible Job’ film that famously had him microphoned up on the touchline for matches in Norway and Holland.

McMenemy pulls no punches in ‘A Lifetime’s Obsession’ – published earlier this year by Sport Media – and describes his boss’s actions as selfish.

“Graham was secretly working on a documentary for television,” he writes. “I had gone for our usual pre-match chat in his room.

“I knocked…..no reply. I knocked again…..still no reply. I stood for a moment or two before he answered. I realised there were other people in the room and he was doing an interview. ‘Not just now, Lawrie, come back later,’ he said.

“I left disturbed by what I had seen. When I walked with him to the coach taking us to the stadium, I said: ‘Are you sure that’s a good idea?’ He didn’t check his stride, saying: ‘I will be the judge of that.'”

The long-time ex-Southampton manager reveals that Taylor provided ‘quite a show’ with his half-time rant on that famous night in Oslo. Various members of staff in a packed dressing room realised he was ‘wired up’ and McMenemy recalls ‘a number of players looking at me and rolling their eyes skyward’. “I hope he didn’t react so vehemently simply for the benefit of the cameras,” he adds in print.

It is a good read, balanced by McMenemy’s sympathy for his immediate boss over the wretched officials’ decisions that wrecked a much better performance in Rotterdam. Throughout the 416 pages, the author is unafraid of being outspoken but is often able to see the other side of the argument in what he calls this opportunity to put the record straight.

Talk of a rift between Taylor and Gary Lineker – one that reached a head when the striker was taken off in the defeat in Sweden in the 1992 European Championships finals with the side needing a goal to save their skins – is another bold disclosure, especially as McMenemy says certain players never really accepted Bobby Robson’s successor. 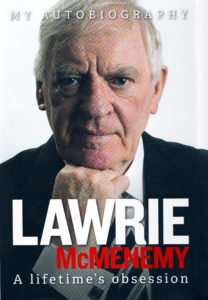 The front cover of ‘A Lifetime’s Obsession’.

“The anti-Taylor mood was picked up by the players,” he adds. “There was an insolence among some that disturbed me.

“They were part of the pack that clearly didn’t see him as right for the job. It was not open war but there was a tension obvious to me from the likes of Gary Lineker that Graham could have done without.”