A Fleeting Glimpse Of Garnham

Keeper Opted For The Overseas Life

It’s not only Maurice Daly from the 1970s Molineux who found a new life for himself in Sweden. A little-known goalkeeper from the era did likewise and, as usual, Charles Bamforth was the man we detailed to track him down. He didn’t disappoint….. 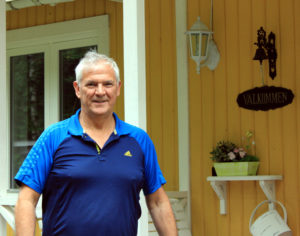 Stuart Garnham now…..we assume the sign on the wall is Swedish for ‘welcome’!

As a kid, I dreamed of seeing my name in the Wolves programme as goalkeeper for the Wolves B team. Just one mention would have been enough – I would have boasted about it for the rest of my time on this mortal coil.

Alas, it was not meant to be but the next best thing is chatting to the men who did live the dream, no matter how far they rose in the organisation.

Stuart Garnham certainly qualifies and, if first-team appearances on summer tours count for anything, he can look back on a mission accomplished at the highest level.

As his accent still attests, Garnham was born in Selby, Yorkshire; home to a wonderful abbey and another fine keeper, Steve Sherwood.

He represented the local secondary team but was soon playing for York’s youth side in the Northern Intermediate League, which featured the A sides of the major northern clubs as well as (just before Stuart started with York), the Wath Wanderers nursery side of the Wolves.

“My favourite team was Leeds but my hero was Bob Wilson,” he said.

I asked if he knew that the Arsenal legend, like him, had been a youngster in the second and third teams at Wolves. He chuckled. “I might have but, if I did, I forgot it,” he added.

Years ago, in my book about the Wolves keepers, I noted that there are those who seem to remember their games save by save (Geoff Sidebottom was one such) and others who had pretty minimal recall of the specifics. My interviewee here was clearly from the latter school, with no real recall of specific games, such as his first appearances in the Central League. So how was he recruited at Molineux?

“There was a tournament with Wolves scouts watching and I was invited down for trials,” he said. “I remember travelling down in a VW Beetle. I was 16. 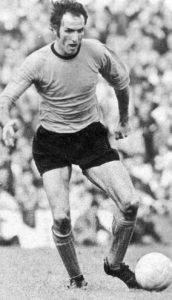 “I had also been on trials to Middlesbrough. With Wolves, I played a match at Castlecroft and it went well. Joe Gardiner signed me as apprentice. I cleaned the boots of The Doog, John Richards and John McAlle. I don’t suppose the kids do that these days, eh?

“I signed pro when I was 18 in December, 1973. I think it was £20 a week. I was better off as an apprentice at £10 a week because they paid for your digs then. With the same landlady were Sammy Wright, Kenny Todd and Alan Sunderland.

“My closest friends at the club were Sammy, Alan Niven and Norman Bell but all the youngsters were very close as a group of hopefuls. We were playing, eating, sleeping and sharing successes and disappointments together.

“The other keepers were Phil Parkes, Kevin Charlton and, later, Gary Pierce. Phil was a big help. A massive guy and lovely chap.”

Garnham was soon playing from time to time in the reserves and went on loan to Northampton under Bill Dodgin Junior for a solitary appearance in the old Fourth Division.

Stuart must have realised he was on the Molineux first-team radar when selected to go on the tours of Sweden in the summers of 1975 and 1976.

“Nice summer weather, lovely pitches…..I probably remembered that when I decided to go over there years later,” he recalls.

In March, 1977, a small fee took Stuart to John Barnwell’s Peterborough in the Third Division. Among those in the Posh side on debut day at home to Port Vale in a 1-1 draw on May 4 were hard-tackling ex-Forest fullback Peter Hindley, redoubtable scorer David Gregory and skilful schemer Tommy Robson.

A week later, United shipped five goals to Walsall in a game at London Road and Keith Waugh returned between the sticks. The following season, Bill Dodgin asked for Garnham on a second loan spell – one that brought him 11 appearances.

By now Stuart was thinking about his future and he decided it would be in Sweden.

“I played successively for Karlstad, Djurgårdens, Kils AIK and Degerfors,” he reveals. “I remember playing against Maurice Daly when he was with Västerås.

Garnham in his Molineux days.

“Swedish football was part-time pro and I had various jobs before deciding at the age of 35 to train as a teacher at Karlstad University.

“I teach mathematics and science in Sunne to kids aged 13 to 16. I used to coach football but haven’t for 20 years now.

“My wife Jane is from Wolverhampton and of course we met when I was playing for the Wolves. We have three children – Nicholas, Robin and Katie. They have dual citizenship and Robin played handball for England at the London Olympics in 2012.”