John Dee In Print To Celebrate His 50 Years Of Reporting 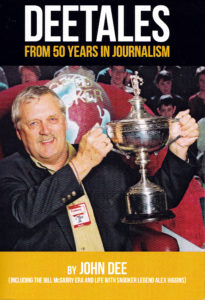 A front cover that takes in his two main sporting interests.

Given that John Dee spent five mid-1970s years covering Wolves for the Express & Star and then became close friends with Alex ‘Hurricane’ Higgins on the international snooker circuit, he was never going to be short of material for the book he has written on his 50 years in journalism.

The author deputised for and then took over from Phil Morgan, the man who had been lucky enough to be the paper’s Molineux correspondent for almost a quarter of a century, and has stories worth telling….

He was the journalist Ronnie Allen called to tell him about his Molineux sacking in 1968, he had been privy to a rather choice comment the manager made about a high-profile board member shortly before, he was ghost-writing Peter Knowles’s column in the Sporting Star when the inside-forward walked into the Express & Star’s office to give him the exclusive story that he was quitting and it was a phone call from the Sunday People’s Brian Madley to him in the press box at a pre-season Watney Cup game at Bristol Rovers that alerted the wider world to the possibility of a scandal around the Leeds game of 1972.

‘Detales’ is not a heavy read – it is one of the few books that is unnumbered and it may leave some fans wanting more. But it is a worthy fly-on-the-wall account of the club’s most successful era since the 1950s halcyon days.

It surprised me in parts with its candidness. Dee, whose bedroom at the family’s Gloucester home went within six yards of being struck by a German bomb during his early years, watched the notorious Leeds visit from the players’ tunnel and recalls a remark he heard from a player at half-time.

He also names names in a link behind whatever it was that prompted the Sunday People to subsequently send two reporters to speak to him at a meeting with him, Dave Wagstaffe and Frank Munro at Waggy’s house.

Dee treads an interesting line between stark revelations and telling why he is skirting round other issues but there’s substantial new content here for Wolves eyes.

He was close enough to the squad and the inner circle to be able to now offer plenty of insight into the scrapes and japes that clubs and their personnel inevitably get into.

He spoke to several players in the compiling of this paperback and John Richards, John McAlle, Phil Parkes and Gerry Taylor were present last month when the launch of it coincided with his 80th birthday celebrations.

Also in attendance were members of the snooker fraternity, with whom he is even more familiar. 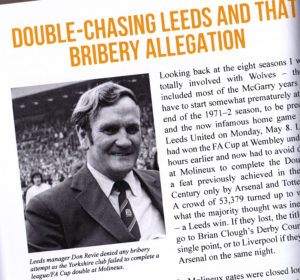 John Dee offers his take on a huge story…..one that saw him giving a statement to a detective inspector at a Wolverhampton police station.

And they will surely lap up some of those magnificent ‘Hurricane’ Higgins stories – after all, Dee was his manager for three months and once shared a semi in the Midlands with him for six.

There is a very worthy cause to all this, other than the opening of windows into life at Molineux and on the green baize.

The author’s granddaughter Eloise has a type of muscular dystrophy and proceeds from the book go to fighting the condition. Anyone interested in purchasing ‘Detales’ (£12 including postage) should contact us or email direct to him at johnhdee@hotmail.com or his daughter at sharmanedge@gmail.com