China, Chung And Chugging Off Home – A Chat With Charlie!

Meeting JR, Nearly Half A Century On 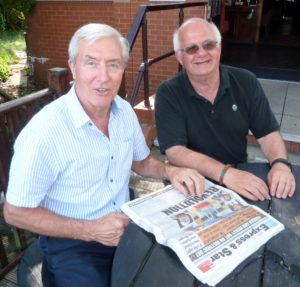 Reading all about it……..on a big, big day for Wolves.

On the day that we fully absorbed the headlines of Wolves’ dramatic Chinese takeover, we staged a mini international event of our own by bringing together this site’s co-owners and our far-flung most ardent supporter.

Charles Bamforth had never previously met John Richards – or at least he told us so before asking if there was any chance of a three-way gathering during his current month and a bit in the UK on business from his home in Sacramento.

As we chatted over the arrival of the Fosun Group, the substantial impact on 1960s and 1970s Molineux of Sammy Chung (the son of a Chinaman) and the much-changed prospects for the coming season, recollections of the two of them briefly making each other’s acquaintance long ago came to light.

“I think it was round about the time John made his first-team debut at Albion in 1970,” Bamforth recalled, “I travelled from home near Wigan to watch the reserves play at Stoke, which is the sort of thing I was inclined to do in those days.

“It was a snowy Saturday afternoon in late winter and I seem to remember Phil Parkes, who was playing because John Oldfield was in the first team, wearing tracksuit bottoms for at least part of the game.

“It was a draw and have no recollection whether John scored but I jumped on the train afterwards and who should get on, asking whether it was the right one for Warrington, but Mr Richards?

“I think I was 17 then and he was maybe 19. I was star-struck. As Wolves Heroes readers may realise, I have always been fascinated by what happened in the sides other than the first team and suspected he had exciting things ahead of him.

“I didn’t know what else to say other than ‘yes’ and just looked through the window. I never even asked for his autograph, either that day or over the next 15 years or so. I never met him again until today, so this has been wonderful.”

Richards has happy memories of his own travels with Wolves to California, where Bamforth has lived in since the 1990s.

Although he failed to score in the defeat in San Francisco that kicked off a series of four exhibition matches against Aberdeen, he did rattle in a hat-trick against them in Los Angeles shortly afterwards. 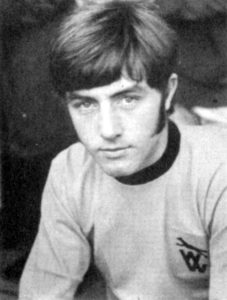 The young JR, not long after his first-team breakthrough.

He was on his way to assist with the re-launch of The Merry Boys pub at Willenhall at teatime when he dropped by for our get-together at The Rock in Tettenhall.

Such is Bamforth’s memory and curiosity that he recalls that the Wolves side on show in the Central League at the Victoria Ground the small matter of 47 years ago had a youngster on the right wing by the name of Fergie McKelvey.

“He must have been a trialist,” Richards chipped in. “I was very much part of the reserve squad all that season and would have remembered him if he had been on the books.”