Beyond The Alps……Will Wolves Set A New Travel Trend?

Hardly the hottest ticket in town…….but a nice souvenir nonetheles..

Who knows where Wolves’ summer travels will take them in future following their spectacular Chinese takeover?

After all, Leicester’s Thai owners didn’t wait until the club’s scarcely believable title conquest to whisk the squad off to the Far East – they went at the end of 2014-15 as a forerunner to their champions’ lap-of-honour return visit in May.

We can probably safely say that Wolves will be spreading their wings further than the Republic of Ireland over the next 12 months and may well embark on the club’s first trip to China – the recent destination for the Manchester clubs, only for their planned Far East derby in Beijing to be washed out because of waterlogging.

What has again been noticeable this pre-season, though, is how many clubs from the top flight and beyond have opted for a destination that the gold and black fraternity became familiar with two decades ago.

Dave Jones, with various clubs, has always favoured Portugal for preparing for a season. With Mark McGhee, it was Germany and Austria, the latter having undergone an invasion from English shores this month.

Chelsea, Hull, Sunderland, Albion, Leicester, West Ham, Everton, Watford and a squad of Swansea age-group players have all descended on the Alps to tone up for 2016-17 while the many clubs from other divisions to have gone to the country include the recently relegated duo, Aston Villa and Norwich.

Only twice had Wolves been to Austria before the summer of 1996 – for a friendly against Rapid Vienna when they were champions in 1954 for the first time and for a tie in the European Cup Winners Cup against FK Austria in 1960 a few months after they had got their hands on the FA Cup once more. 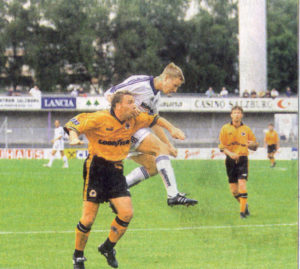 Paul Simpson beaten in the air by his man – and Wolves were left grounded by Salzburg in 1998.

But McGhee took his men there twice in three summers, playing two games there and two in Germany on each occasion.