Golden Memories Of Our Golden Boys

We couldn’t let the golden anniversary of England’s only World Cup finals triumph pass unrecognised on this site and, helped by an outstanding BBC Radio 5 Live documentary last night, have come up with the following memories of this country’s greatest football occasion…..some of them Molineux-related and others observations that might have been forgotten or overlooked by the masses.

Ok, we didn’t make it to 50, one for each year, but we did get to 20 and invite our readers to send us any particular recollections they may have. Read and reminisce…… 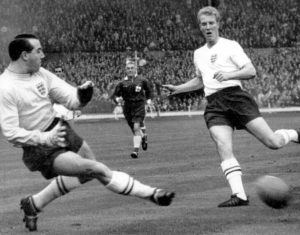 Ron Flowers in action for his country at Wembley.

1. Ron Flowers had been absent from ten successive England sides before winning his 49th and final cap (away to Norway 12 days before we kicked off our World Cup programme).

2. Bobby Moore survived testicular cancer two years before he lifted the Jules Rimet Trophy – a fact hushed-up at the time by the small clique of Fleet Street journalists in the know.

3. Ray Crawford played a part in England winning the World Cup, although his two international caps both came several years before the tournament. All those goals he scored in helping Ipswich won the title under Alf Ramsey in 1961-62 inevitably helped his club manager become national boss.

4. Ramsey is reputed to have had romany ancestry and was often privately mocked by his players for his posh accent, given that he came from the same parts of East London as several of them.

5. Alan Ball was 15 when discarded by Wolves, after several trial matches, in 1960 – please see our https://www.wolvesheroes.com/2011/09/23/costly-discarding-of-world-cup-winner/ story.

6. There was an archaic feel to the system by which England’s team were for so long picked pre-Ramsey by selectors rather than a manager. Some of these ‘suits’ occasionally called Bobby Moore ‘Ron’, mistaking him for Ron Flowers.

7. Here’s a thing……would Bobby even have played in 1966 had it not been for the Munich air crash? Observers of the time insist that Black Country boy Duncan Edwards would have sealed a wing-half place long before – and probably been captain by then.

8. While we are talking in what-might-have-beens………Ted Farmer would surely have challenged for an England place in the mid-1960s but for his injury heartbreak.

9. And Frank Wignall maintained to us in this story (https://www.wolvesheroes.com/2009/03/20/frank-opinion-on-what-might-have-been/) as far back as 2009 that he might well have been a contender as a Boy of 66 had he not broken his leg.

10. So who was the first Englishman to touch the ball in the final against West Germany? If you said Neil Rioch – brother of Bruce and also later to have a career with Luton, Aston Villa and others – you probably attend pub quizzes or read Backpass magazine! The young Rioch was a Wembley ball boy that day and leapt into action before any home player had had a touch following the Germans’ kick-off. 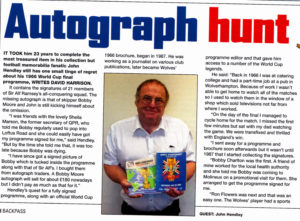 John Hendley, profiled in Backpass magazine over his search for the heroes of 66.

11. Despite Geoff Hurst’s heroics, six was a key number in the final and over that glorious month as a whole. That was the shirt worn by both Bobby Moore and Wolfgang Weber, the scorer of West Germany’s last-gasp equaliser in normal time. There were six goals in the final and we also played six games in the tournament.

12. Wolves programme editor John Hendley set off in the late 1980s on a mission to get his copy of the 1966 final programme signed by all members of the victorious squad and, Bobby Moore apart, had fully accomplished it by 2010 – an achievement recorded in the newly-published issue 51 of Backpass.

13. The 66 tournament had an equivalent of the Jamie Vardy saga. Just as the heroic Leicester striker went into this summer’s Euros amid uncertainty over whether he was staying or going, so Moore was in contract dispute with West Ham 50 years ago. Ramsey went against his instincts and allowed Hammers manager Ron Greenwood into his camp one night, so the skipper could put his signature to a new Upton Park deal. Would it have been more lucrative had he waited until the start of August?

14. Watchers of the BBC’s The One Show might have seen the programme’s tribute to our World Cup heroes last Wednesday. Among those at Wembley on final day to have been interviewed on air were Wulfrunians Ros Pedley and Liz Berry, the latter of whom is the mother of Wolves’ media relations manager, Paul Berry.

15. Bobby Gould, then a young forward making his way with Coventry, was also in the capacity crowd exactly 50 years ago this weekend, the Wembley attendance for the first group game, against Uruguay, having by contrast been a pay-on-the-night 87,148 – more than 10,000 below capacity.

16. Talk of Alf’s Wingless Wonders should be treated with some caution…..the Daily Mail’s Jeff Powell reminds us that a trio of no 7s, John Connelly, Ian Callaghan and Terry Paine, were each tried in the tournament but didn’t fire as well as the manager hoped.

17. Alf Ramsey and the FA strove hard to make sure England played all their games at the national stadium but the tournament had a Midlands angle for the hosts, courtesy of their use of Lilleshall as a base for a few days of preparation. It was described as dormitory-style accommodation, with strict curfews and bedtimes.

18. Less than a fortnight after the World Cup final, Bobby Moore, Geoff Hurst and Martin Peters were part of the West Ham squad who stayed in the same hotel as Wolves’ players during the clubs’ respective pre-season tours of Switzerland. Several members of Ronnie Allen’s party went to watch the Hammers play in Lausanne. 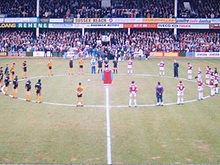 West Ham and Wolves players observe a minute’s silence at Upton Park following the death of Bobby Moore in 1993.

19. The first match West Ham played after Moore’s death in 1993 was a home one against Wolves in the second tier. And we feel this story (https://www.wolvesheroes.com/2010/03/21/bertie-and-bobby-you-couldnt-make-it-up/) is powerful enough to be worth another look at this time.

20. Ron Flowers, now a vice-president at Molineux, carried out the match ball before Wolves’ home friendly against Swansea yesterday.