A Message From The East Midlands: ‘My Hero Dave’

Dave Maclaren as a Leicester keeper in 1958.

Monday, July 4: Received a lovely email out of the blue from Leicester fan Robin Wright, whose Google search on Dave Maclaren had led him to our site. Robin sent us a personal appreciation of the former Wolves and Foxes keeper, who was a major hero in his youthful days watching football at Filbert Street. He described himself as delighted to hear that the one-time Molineux coach was still with us and asked us to pass on his tribute to both Dave and his family in Australia and also to the Wolves Heroes representative, Charles Bamforth, who met him for interview purposes on a business trip Down Under in 2012.

Thursday, July 14: Bumped into Wolves supporter James Fielden, a past member of the club’s Fans Parliament, on a visit to a city centre coffee shop and expressed envy that he was shortly to depart to Rio on Olympic Games duty. What’s more, a third member of our media fraternity, the Express & Star’s Tim Spiers, appeared soon afterwards with talk of a takeover at Molineux very much in the air.

Sunday, July 17: Well done to Kenny Jackett for putting himself out and turning up, in difficult times, at the London Wolves 50th anniversary dinner at Charlton yesterday. He is due in Ireland later today for the friendly in Cork and this pre-season can’t have been much fun for him with so much talk of probable change at the helm. Nice to hear that director John Gough, who represents the club so diligently, was also at The Valley, as were ex-players John Richards, Mike Bailey, Graham Hawkins, Willie Carr, Mel Eves, Neil Edwards, Robbie Dennison and Paul Butler. Compere was former London Wolves member Jacqui Oatley, now an MBE.

Saturday, July 30: Nice though it was to see Ron Flowers carrying the ball out for Wolves’ friendly against Swansea, couldn’t help but find it a bit sad that he wasn’t at Wembley instead. This is, after all, 50 years to the day since our only World Cup final triumph……..shouldn’t the FA have been organising something for ALL members of Alf Ramsey’s squad?

Monday, August 1: Felt sad on the day of Walter Zenga’s introductory press conference in Molineux’s Hayward Suite at having to be putting some finality to Kenny Jackett’s match figures in the managers’ area of this website. The sacking on Friday of this thoroughly decent man means he remains level with Ronnie Allen in the Molineux gaffers’ list, both having overseen exactly 150 games.

Wednesday, August 3: Time for a recount…..discovered that one of the implications of our statistician friends finding an extra player from Wolves’ past is that the honour of having been the 500th player to appear in a League match for the club was actually Pat Neil and not, as previously thought, Joe Bonson (see the August 4 entry in our News Area for more details). 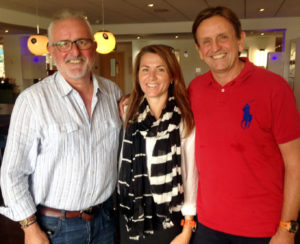 Friday, August 5: Met Richard Green, from the Wolves Former Players Association, and our good friend Odin Henrikksen over coffee at Wolverhampton’s Novotel. Odin is over here from his home in Norway with girlfriend Cecilie, so the three of us made plans to travel together to Rotherham tomorrow. Not only was he determined to offer his support on day one of the new season, he is coming back in early October to attend the launch of the Steve Plant book, They Wore The Shirt, which he has backed both as a sponsor and a subscriber. What a top, top effort – again!