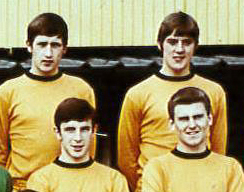 Hermann Hesse writes in Siddhartha: “I have always believed, and I still believe, that whatever good or bad fortune may come our way, we can always give it meaning and transform it into something of value.”

A broken leg at a time when it was rumoured that he was about to be selected to skipper England Youths was a cruel blow for Roger Grice.

It spelled the end to a promising Wolves career but few are the players who can look back to quite such long and dedicated service as a footballer. It wasn’t until he was 43 that this redoubtable right-back decided he was done.

Tipton-born, Tipton-raised, Tipton-employed and a Tipton resident to this day, Roger Grice was born in October, 1950.

“I attended Willingsworth Secondary Modern School and played for them, for Brierley Hill Schoolboys, for Staffordshire Schoolboys and for the Pick of the Midlands side,” he said.

“My family were big Albion supporters but I was always Wolves. I was a big fan of Joe ‘Chopper’ Wilson.

“Walsall were in for me, so were Coventry, but that would have meant me leaving home. Eric Cox scouted me for Wolves and I left school to sign as an apprentice at Molineux in 1966. I signed on the very day that Ronnie Allen was appointed manager.

“I remember my first game in the fourth team, in the Worcestershire Combination at Jack Mould’s in Birmingham. We had excellent young players at the time, like my good friend Grenville Riley, who was also from Tipton and with whom I travelled in, Bertie Lutton, John McAlle, John Farrington and many more.

“Ronnie Allen was superb. I really did not get on with Bill McGarry, who I found too arrogant. You couldn’t get on the coach to go to Castlecroft before he was on board.”

Roger thinks back fondly to his time at Wolves, where he signed full professional forms in January, 1968, learning the game from the likes of Gerry Summers, Ron Bradley and the original Chopper, Jack Dowen. Before long, he was in the Central League team and having his eyes opened in various ways.

“I recall one Boxing Day when we were playing at Newcastle,” he added. “We arrived at a hotel for the usual boiled chicken and toast and the Manchester United and Leeds United first teams had also stopped there.

“There were Bobby Charlton and Billy Bremner chatting as they dragged on cigarettes. I was really surprised. Mind you, Waggy loved his Park Drive. I remember the time Ronnie Allen found them and ripped up a pack!”

A hard-luck story from the programme for Wolves’ home tie against Stoke in the 1968-69 FA Youth Cup.

Grice was making great headway in the back-up teams when huge misfortune struck.

“It was a West Midlands League game at Castlecroft against Bromsgrove,” he said. “I went into a tackle on Colin ‘Cannonball’ Taylor, the old Walsall winger. My shin went one way and my hip the other. It seems there was a cyst on the femur and that’s where the break came.

“I was out for a long time. When I came out of the Royal Hospital, they sent me to Patshull Hall Rehabilitation Centre for quite a while. When I got back, I felt as good as new and was back in the Central League side, but of course they now considered me an insurance risk, so they freed me. Others had managed to get in – Jim McVeigh for instance.”

Among the cuttings Roger has kept of his career is reference to a prank orchestrated by Phil Parkes, doubtless to cheer up the full-back in his hospital bed.

Grenville Riley was decked out in a white doctor’s gown and surgical mask, looking for all the world like he was about to operate, only to present a bed pan to his buddy. 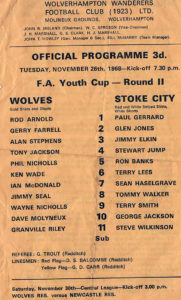 The youth side he might have expected to skipper.

Far too soon, Roger was gone from the rich camaraderie among the Molineux staff. “I went to work at Devis, the abattoir in Tipton, humping beef on the dock,” he continued.

“As for playing football, I joined Telford under Ron Flowers. I didn’t drive, so I used to go travel with Phil Weir from Wolverhampton. We trained Tuesdays and Thursdays but, if we lost on a Saturday, Ron would have us in on a Sunday.

“It was a lot of travel, so I signed for Darlaston and loved it. I was there for a couple of seasons and we had a lot of success. In 1973, we beat Leamington at Fellows Park to win the Birmingham Senior Cup. It was the first thing they had ever won.”

The Citizens were also finalists in the Walsall Senior Cup, losing to Bilston. It was a good team. Apart from Grice, they had ex-Walsall keeper Keith Ball, another Tipton-lad in Alec Jackson (previously of Albion, Birmingham and Walsall) and three ex-Wolves youngsters, Brian Punter, Granville Palin and Les Cocker.

“Then I joined Redditch United with Rhys Davies for eight or nine years (we were Southern League North Division champions in 1975 – 1976) before going with him to Sutton Coldfield. I was only there for about six weeks because they couldn’t understand me! I went back to Redditch until the money ran out.

“Next was Tividale, then Alvechuch and then Tividale again. I packed it in in 1993-4. I didn’t go into coaching or management – by now I’m working the 2-10 shift with George Hipkins, the sausage company. Then it was 12 years on a building site before I retired.

“I used to have a season ticket at the Wolves. But when they dropped into League One I thought better of it. I went last season a few times….not impressed!”

Roger Grice still has his scrapbook that records every inch of his career. Had he not made contact with a Cannonball, who knows how different that book would have turned out?