On Course For Another Great Day 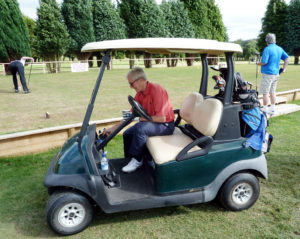 Don’t worry…..JR isn’t about to start the engine while the bending Steve Daley gets ready to drive!

Nine outfield men, a couple of goalkeepers and even a highly experienced manager…..

It helps to have a forceful ‘leader’ around to organise the ‘dressing room’ all these decades on and no-one could carry that role off better than Steve Daley.

English football’s one-time costliest signing was at his best again yesterday at The Wergs, near Tettenhall.

A few hundred yards from where Derek Dougan used to live – one of his subsequent homes backed right on to John McAlle’s home course of South Staffs – Daley warmly welcomed the 24 teams with the message that the annual event had sold out in double quick time.

This competition is quite a success story and continues to be loved by those who take part, helped on this occasion by warm sunshine, albeit with a cool, strong breeze.

John Richards has had to be content with a spectator role in the recent past but, amid shades of his football career, is back now after an operation!

He was in the same quartet as Daley, having had only one (recent) round in about three years, either side of ankle surgery during 2013-14.

From the early 1970s, McAlle, Phil Parkes and Steve Kindon were also in the field and Willie Carr, from a few years later, was present as usual, having played in the Coventry City equivalent of the event earlier this summer.

Mel Eves, Terry Wharton and Colin Brazier described it as groundhog day when they teed off together, the only difference from 12 months ago being that Dale Rudge, rather than Gerry O’Hara, completed their group.

As for the manager, that was Dave Jones, who was frequently seen last summer as well among such turn-outs. So that just leaves our second goalkeeper……. 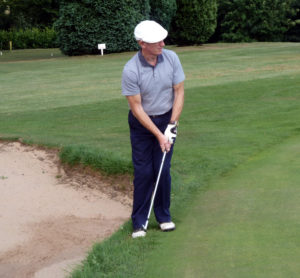 And there was great delight in the discovery that Alex Stepney had been ‘signed’ for the day, both to play and also to speak over dinner in the evening.

The Londoner enjoyed a wonderful career with Manchester United but, distinguished guest or not, he was not spared the Daley treatment – via a reminder of when he had a penalty saved by Gary Pierce during a Wolves draw at Old Trafford shortly before the 1974 League Cup final.