Coming Soon….Another Slant On The Legend 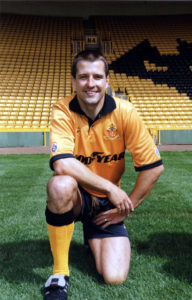 Another Steve Bull book is on the way for Wolves fans in the run-up to Christmas.

The man who has already been the subject of several publications is due to hit the shelves again in the coming weeks.

Talk several weeks ago that the project was under way has been confirmed by the mention in the club’s latest merchandise catalogue of Bully: Forever Wolves.

Remarkably, the £14.99 offering comes well over a quarter of a century after the first book about him – ‘Bully’ by West Midlands journalist Rob Bishop.

‘The Bully Years’, by Wolves Heroes’ David Instone followed in 1995, after which devoted fan Robert McNally penned his own special tribute in the form of ‘Ooh Bully, Bully’ in 2002.

Still the area’s authors weren’t satisfied. Cradley-based publishers Britespot got in on the act in the year Premier League football first came to Molineux, 2003, with a ‘My Memories’ variation.

Finally – and please remind us if we have missed any! – came ‘Billy and Bully’ by David Instone in 2009, ten years on from when the striker broke the hearts of thousands of supporters by announcing his retirement.

It is a lot of books about one man but there were a lot of highlights…….the small matter of 306 Wolves goals for a start. 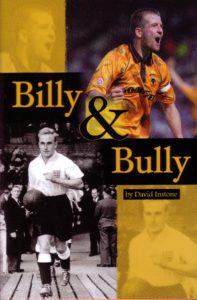 One of the past titles written in tribute to Wolves’ highest ever goalscorer….

We plan to bring more details about this new publication nearer to launch date, committed as we are to promoting the efforts even of those who may be considered our literary rivals.

Wolves’ catalogue also contains mention of the project we have been wholeheartedly supporting and helping with these last few months, Steve Plant’s outstanding 256-page hard-back, ‘They Wore The Shirt’.

The book is out next month, with an invite-only VIP launch at Molineux on October 5. For details of how to qualify for admission or simply how to order, please feel free to contact us by email or on 07734-440095 – alternatively, email the publisher at wolvesandengland@hotmail.co.uk