Danny Hegan during his Ipswich career.

Wolves’ home game with Ipswich this week reconnected us with the East Anglia media and brought another bizarre Danny Hegan tale to our attention.

We have written more than once on here of the characteristics that made the late midfielder a frequent topic of conversation among team-mates and supporters alike.

But we hadn’t previously heard the story we were regaled with this morning by Mel Henderson, a Scot who became one of football’s first press and PR officers when appointed at Ipswich in 1974.

Hegan had long since departed Portman Road but was to once more cross the path of his former club after moving back to Coatbridge, the town north of the border in which he was born.

“I never saw Danny here but was aware what a talented player he had been,” said Henderson, who remains a reporter on Ipswich and Norwich home games.

“Many people had also spoken of his crowd-pleasing ways, so I suppose we shouldn’t have been surprised by the way he popped up to say hello to a few of his old colleagues sometime in the second half of the 1970s.

“I was with the team travelling back from a game at Newcastle and sitting with the directors and management staff when the steward came into our carriage and told Bobby Robson there was someone on board who had known him a few years earlier and would like to see him again briefly.

“We all assumed it would be a supporter or an autograph hunter and Bobby said ‘What the hell…..?’ when Danny walked in to greet him. He couldn’t believe his eyes.

“The two had been together at Ipswich in the late 1960s before West Brom and then Wolves had come in to sign him.

“Apparently, Danny had been at home mowing his lawn that morning and had just happened to ask his neighbour, the train steward, what he was up to that day.

“When told he was on the London train and in charge of serving the Ipswich players on their way home from Newcastle, Danny had said: ‘Give me five minutes……I’ll come with you’.

“I can still see the shock on the faces of people like Cyril Lea and Mr Cobbold….but it was typical of the sort of behaviour Danny was well known for around here. 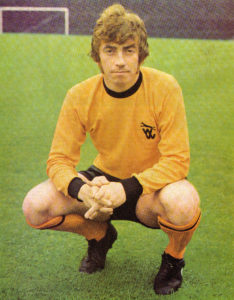 The maverick talent as we best remember him.

“It would have been a long old haul for him, getting on at Glasgow or Edinburgh and maybe going all the way down to Kings Cross, Liverpool Street or somewhere after we hopped off at Peterborough where our coach was waiting.

“All that just to catch up with some old friends!”

* Mel Henderson was the author of the book about John Cobbold that we featured in September, 2014 – when another Hegan tale was well to the fore!