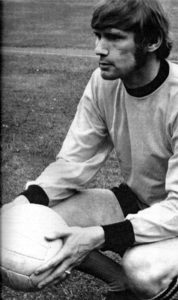 Dave Wagstaffe….scourge of the full-backs.

It is three years today since the funeral of Dave Wagstaffe, the much-loved Wolves winger who passed away on August 6, 2013. To mark this sad anniversary, John Lalley – a big fan of the flying winger – has called the player a ‘genuine Wolves icon’ and penned these moving words:

Proper and fulsome tributes to Waggy’s fine career were expressed at the time but a few personal reminiscences about a true hero seem appropriate right now.

He graced the gold shirt on more than 400 occasions between 1964 and 1976 and was, quite simply, a marvellous player; an absolute delight to behold with breathtaking skills, penetrative distribution and imaginative subtlety, all encapsulated in the elemental attraction of an out-and-out, orthodox attacking winger.

From the outset, he engendered excitement, lifted the spirits and retained to the end the rare gift of being able to lift the drudgery of the working week for Wolves fans and impart a brief but special feeling of exhilaration.

Often the last to appear on the pitch from the cramped confines of the players’ tunnel on the Waterloo Road side of Molineux, Wagstaffe’s arrival frequently induced an increased buzz of anticipation from appreciative and expectant fans who identified him as supplier-in-chief for the grateful recipients of his inviting deliveries.

McImoyle, Knowles, Hunt, Wignall and Curran all reaped substantial benefit before the final insatiable double act of John Richards and Derek Dougan gorged themselves on the menu he provided for their delectation.

Dougan, never given to reticence or understatement, consistently acknowledged the winger’s contribution to his success. “At his peak, Waggy justified comparison with all the great raiding wingmen,” he said. “I considered it a cardinal sin that he never played for his country. He was a victim of a system that virtually dispensed with wingers with a game more enamoured by clichés such as ‘work-rate’ and ‘getting men behind the ball.’”

Opponents felt the same. Brian Clough famously expressed his disdain for potential threats posed by other teams but, in Wagstaffe’s case, he made an exception.

Welsh international Alan Durban, a lynchpin of Clough’s outstanding Derby team, recalls that, against Wolves, he played with strict instructions to prevent at all costs possession of the ball for Wagstaffe to nullify the side’s most potent attacking weapon.

Clough, who later enjoyed such staggering success with a Nottingham Forest outfit fashioned by the inspiration of John Robertson, clearly knew a good left-winger when he saw one!

Expressed more simply but just as eloquent was the response of Waggy’s close pal, Frank Munro. In all the conversations I enjoyed with Frank, mention of Wagstaffe always elicited the same initial response: ‘Fantastic player!’ It says it all.

The passing of time brings its sadness as well as happy nostalgia and Frank greatly appreciated Waggy’s kindness during the taxing health struggles of his final years and it’s strange how poignant images linger in the mind.

I can see Waggy now at Fordhouses Cricket Club at the wake after Frank’s funeral, solicitously passing bar vouchers to each mourner with the same invitation to one and all: ‘Have a drink on Frank.’ Needless to say, we all supped with gusto!

All too soon, we were forced to reconvene to pay the final tribute to Waggy himself. During his final years, he appeared to be a contented and fulfilled individual. He was engaging company, happy to reminisce fondly about his time at Molineux.

He was mightily pleased that, on a visit to his first club Manchester City, he saw that his contribution to their club is indeed recognised and appreciated.

But, naturally, his overriding passion remained entrenched in Wolves. Anecdotes about Wembley 1974, personality clashes with Bill McGarry that contrasted wildly with his admiration for Sammy Chung, lack of England recognition that troubled him not an iota……….he was happy to talk about these and any other Wolves’ topic fluently, engagingly and at length.

He didn’t make much money from football but he derived an inner satisfaction that left him with few regrets. He simply had no time for bitterness and his modesty did him immense credit. He was a very decent man.

I will finish with a couple of memories of Waggy at his best. First, during the successful promotion season of 1966-67, when he played in all 42 games and was uniformly brilliant, Wolves struggled to break down a dogged Northampton outfit at Molineux.

With time running out and frustration at boiling point, Waggy – hardly noted as a goalscorer – picked up possession wide left, cut inside and hammered a thunderous winning goal high into the top corner at the North Bank end.

Back in the First Division, he occasionally repeated similar exploits, most notably against Arsenal, but I recall a goal against Chelsea as being every bit as spectacular. 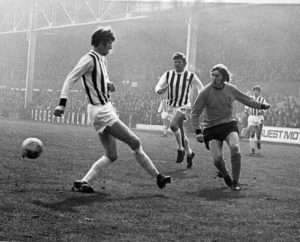 But he is best remembered as a master of his craft as the creator, displaying the trickery and the devastating distributional skills Wolves’ fans so admired. Never was his art emphasised with greater clarity than at The Hawthorns in 1971.

Pressed into playing out of position at full-back, John Kaye, who was a very fine player in his own right, was clinically dismantled by Wagstaffe, whose outstanding performance was the inspiration for a conclusive Wolves victory.

It almost bordered on cruelty, a lacerating, merciless assassination. It was gloriously mesmerising and it remains absolutely unforgettable all these years on. So, too, does Dave Wagstaffe – a genuine Wolves hero.