A Catch-Up With Kenning

Mike Kenning remained one of the higher-profile Molineux men of the last 50 years who we at Wolves Heroes had failed to locate. We had heard he was living somewhere in Africa, so there was only one thing for it……we put the matter in the trusty hands of Charles Bamforth, who searched for him, found him and finally interviewed him. Here is his article.

It is, as we have been regularly reminded this summer, 50 years since the World Cup win with the ‘wingless wonders’. Let it be said, though, that Ian Callaghan, John Connelly and Terry Paine played in the early rounds of the tournament.

The unthinking put a place marker on July, 1966, as the sudden transition point after which the traditional flanker was consigned to history. 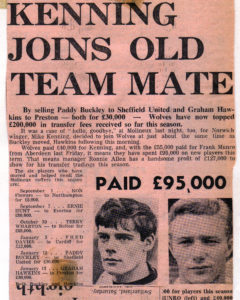 The Sporting Star cutting from the late 1960s showing that Wolves still believed wingers could rule….

Molineux aficionados know that this is bunkum and, the very next season, Terry Wharton and David Wagstaffe continued to lead opposing full-backs the merriest of dances – merry for the joyous Wanderers faithful, that is.

Waggy, of course, stayed for many a long year but Terry headed home to Bolton early in 1967-68.

There was sorrow at seeing Wharton go but we realised pretty soon that life goes on and the number seven shirt passed first to the racehorse that was John Farrington.

Promising though the youngster was, manager Ronnie Allen recognised the importance of experience to a side at the wrong end of Division One in their first season back up.

One assumes he took his skipper’s advice in forking out £35,000 to Norwich to bring Mike Kenning closer to his roots as the latest fleet-footed, power-shooting winger to do justice to the no 7 (and sometimes no 11) shirt at Molineux.

These days, Mike is domiciled near Johannesburg, a sprightly 76-year-old who looks back fondly on a career that topped 400 senior games and a goal rate of better than one in every five games played.

Just three of those games were for his boyhood heroes, Aston Villa, for whom he signed as a professional at the age of 19 after playing for Brookhill.

“Being born in Erdington, it wasn’t hard to become a Villa fan and it was wonderful to play a few first-team games with the likes of Nigel Sims, Stan Lynn, Jimmy Dugdale, Gerry Hitchens, Peter McParland and Pat Saward,” he said.

“It was a dream come true. Joe Mercer was the manager and Dick Taylor followed him. I found both very helpful and they showed a lot of patience. Among the younger players I befriended were John Sleeuwenhoek, George Graham, Alan Deakin, Mickey Tindall, Harry Burrows and Terry Morrall, who was my best man when I married Gill in 1963. Like me, Terry joined Shrewsbury.”

In Mike’s case, that was in May, 1961 and he rewarded the Shrews with 17 goals in 62 League games in Division Four. The player-manager was the redoubtable goalscorer, Arthur Rowley.

“He encouraged me to play on both flanks, which was to be a big help when I transferred to Charlton, as the manager there, Frank Hill, asked me to do the same. He was later replaced by Bob Stokoe, who I found to be very down-to-earth, and I played some of my best soccer at that time.”

“Mike Bailey was the captain and we became good friends, later joining up at Wolves, of course. Apart from Mike, there were plenty of fine players at The Valley, including Paul Went, Billy Bonds, Marvin Hinton, Peter Reeves, Eddie Firmani and Len Glover, who was a particularly close friend.”

Just before Christmas in 1966, though, a £27,000 offer from Norwich was too much for Athletic to turn down and Mike was on his way to Carrow Road.

“Our first son, Gary, was born at that time. I was very impressed with Lol Morgan’s management style and was surprised he never made it at one of the bigger clubs.

“While at Norwich, I played in the game that was probably the highlight of my career, the FA Cup fixture at Old Trafford in 1966, when we beat Manchester United 2-1. Their team included Nobby Stiles, Paddy Crerand, Bobby Charlton, Denis Law and George Best. 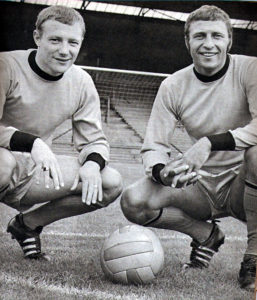 Mike Kenning and Mike Bailey…..team-mates at Charlton, then at Molineux.

“Needless to say, we were rocking for a few weeks until we went down 3-2 to Sheffield Wednesday, who lost to Everton in the final. Some of the characters in that Canaries side were keeper Kevin Keelan, who had been with me at Villa Park, Laurie Brown, Laurie Sheffield, Dave Stringer, Don Heath, Tommy Bryceland, Ken Foggo and, of course, Hughie Curran, who joined me at Molineux.”

“I started with a goal past Peter Shilton at Leicester,” he added. “I got on well with Ronnie and was sorry to see him go the following season.

“It was good to join up again with Mike Bailey but I was also good friends with Dave Wagstaffe (who was everybody’s friend), Derek Parkin, Phil Parkes, Frank Munro, Frank Wignall, Hughie Curran and Les Wilson.”

Wilson recalls Mike Kenning well. Speaking from his home in Vancouver, he told me: “I remember a game in December, 1968 when Mike very confidently and calmly scored a penalty against Chelsea at Stamford Bridge.

“He played right wing and I played left wing for the injured David Wagstaffe. This game was played before 27,000 Chelsea fans. I was impressed with Mike’ pace, his very quiet demeanour and, wow, was he calm and confident with his penalties! He was very quick….he had speed to burn.”

Allen’s departure heralded the Bill McGarry era, which has been amply documented in these pages as a mixed bag for players, depending on their point of view. 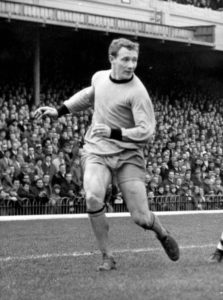 Kenning in action in a Wolves win at Highbury in March, 1968.

Kenning says: “I found Bill McGarry’s style of management a bit otherwise, which made me decide that if I ever went into coaching or management, I would treat all the players the same. I do, however, remember the coach Gerry Summers being very keen and popular with the players.”

Five goals in 41 top-flight fixtures caught the attention of an old club and Eddie Firmani invited Kenning back to The Valley, this time for a fee of £20,000 in March, 1969.

“I was sorry to leave Wolverhampton but it was probably the best decision at the time,” he admitted. “I was involved in a car crash on the M1 near Luton which slowed me down a bit but, with Theo Foley taking over from Eddie and being very easy to talk to, I was enjoying my soccer, having been made captain and moved into midfield.

“Our second son, Paul, was born in 1970. Gary has given us two granddaughters, Taylor and Gemma, while Paul has produced three grandsons, Aiden, Devon and Kyle, so the Kenning clan is very much up and running!”

Mike himself was the eldest of four boys, the others being Brian, David and Peter. Brian Kenning is no stranger in Midlands football circles, having managed Burton, Sutton Coldfield and Gresley after a lengthy non-League playing career.

“George Kirby and then Mike Keen were the managers,” he recalled, “but, apart from meeting some characters such as Duncan Welbourne, Mike Walker, Jimmy Lindsay and Billy Jennings, it wasn’t the way I wanted to finish off my League career.”

Kenning struck two goals in 41 games to add to the dozen strikes in 67 games in his second tour of duty with Charlton.

“I played at Atherstone for a while under Gil Merrick, then decided to come to South Africa,” he added. “Initially, I joined Port Elizabeth City, where the chairman was the great cricketer, Graeme Pollock.

“While I was there, I was offered the player-manager job at Germiston Callies near Johannesburg. That was in 1974 and, apart from a few trips back home to Brum, we have enjoyed it here ever since.” 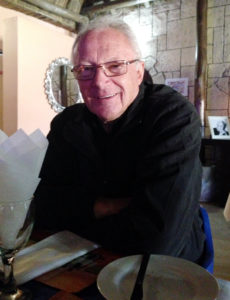 The man himself as he now looks….

Paul attests to his Dad’s continuing fitness. “At 76, he still has the best two feet I have seen,” he says. “I remember him taking us for free-kick training a few years ago and smashing them in with both left and right and then saying: ‘Just like that, boys’. I think my middle son is going to be similar to him, lots of pace.”