Sporting To The Last

In the first half of last year, we turned the spotlight on TV presenter Nick Owen by asking him for his Wolves recollections from over the decades. We followed up recently by carrying a story fed to us by East Anglian journalist Mel Henderson and now we continue our series featuring prominent media personnel by inviting Merseyside-based Fleet Street veteran John Keith to explain, among other things, why Molineux holds a special spot in his affections. 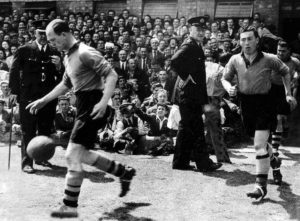 Stan Cullis runs out for his last Wolves game….the fateful title decider against Liverpool in 1947.

Stan Cullis already has a place in football folklore as the man whose sense of fair play kept Wolves waiting another few seasons for their first League Championship crown.

It has been well recorded that the legendary figure might have prevented Albert Stubbins breaking away during the epic final weekend of 1946-47 and scoring the goal that ultimately took the title to Liverpool rather than his beloved club.

In the game that he had already announced would be the last before his injury-enforced retirement as a Wolves and England centre-half, Cullis made the split-second decision not to hold back his man – and so avoided going down in history as the player who decided the outcome of the title race with a professional foul.

The Merseysiders consequently recorded a 2-1 victory that left Ted Vizard’s men agonisingly one point short of the big prize that would eventually come their way for the first time in 1953-54.

Now we can reveal another extraordinary show of virtue that was hugely appreciated by the Liverpool squad; one crowned champions when Stoke lost their remaining match at Sheffield United on the day a win would have left them as title winners on goal average.

John Keith takes up the story: “I wrote Bob Paisley’s official biography and recall Albert Stubbins telling me when I was compiling it that Stan Cullis had tears running down his face as they shook hands at the final whistle.

“Albert knew Stan could have tugged his shirt or done something else to halt his run. That would have prevented the goal and probably made Wolves champions, so it was a very Corinthian act.

“More than that, Bob, who played in the game, recalled that the team bus went past Stan’s home on their way out of Wolverhampton – I believe on the A41 around Tettenhall. And there he was at the gate, waving them off. They were all very touched by that.

“It had been a bad winter weather-wise and when Stoke were playing at Sheffield United well into June, Liverpool were facing Everton in the Liverpool Senior Cup final in front of 40,000 at Anfield. It was announced over the tannoy that the title was theirs and the game stopped so the Everton players could shake hands with their opponents and congratulate them. Can you imagine that happening now?”

Liverpool-born Keith, who is also a prominent Merseyside broadcaster, has no connection through birth or family to the West Midlands and attributes his love of the gold and black to the fact that Wolves thrilled him from afar during his youth by taking on and mastering Europe’s finest.

But it is as a writer, for many years with the Daily Express, that he had many more close encounters with they and their star names.

The ‘happening’ that was Derek Dougan.

“I covered Northern Ireland as well as the Merseyside clubs and was at Goodison Park when John Richards, who had eluded the Liverpool and Everton scouts while growing up in Warrington, won his only England cap,” he added.

“I got to know Derek Dougan well and would describe him as a ‘happening’ more than just a person! He was quite a character to travel with.

“I was doing a book signing with Ian Callaghan once in Rackhams in Birmingham when Derek and his wife Jutta appeared. She cost me a lot of money because I bought a sheepskin coat that she said looked good on me when I tried it on.

“The Doog had retired a year or so before we had that nerve-tingling last night at Molineux in 1976, when Liverpool scored the late goals they needed to win the League and Wolves sadly went down.

“Bob Paisley was Liverpool manager by then and that was the start of something like 19 trophies in nine years for the club.

“I recall Phil Thompson seeing the massive crowds outside Molineux before kick-off and asking Bob if he could let his brother and a friend through that dressing-room door that opened virtually on to the street. About 50 Kirkbyites poured through……it was like Horatio trying to defend the bridge!”

There’s irony in the fact that, while the young Cullis was tempted to Wolverhampton despite his family having settled not far from Liverpool, Wolves might well have had Paisley on their books – with all the implications that might have held.

“Major Buckley turned Bob down,” Keith told us. “They and Sunderland both thought he was too small.

“He was a decent left-half. Basically, his job was to win the ball and give it to Billy Liddell, who pips Dalglish and Gerrard for me as Liverpool’s greatest all-time player.

“I suppose Bob could have had Billy Wright as a rival for a place if he had gone to Wolves and we can only wonder whether he might have gone into the backroom team at Molineux if he’d had a long playing career there. 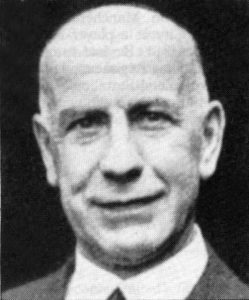 “I have other stories about Wolves, some of them second hand, like when Bill Shankly changed almost his entire line-up at Molineux just before the 1965 FA Cup final.

“Liverpool might have been in trouble with the authorities for fielding a weakened line-up but won 3-1 and Shanks uttered the words: ‘See……..even our reserve team are too good for other clubs’ first teams.’

“A little earlier, in 1963-64, Liverpool had lost their first three home games of the season as Nottingham Forest, Blackpool and West Ham all came here and won 2-1. Shanks had to face the board at the weekly meeting and told them: ‘I promise we WILL get a home win this season.’ A couple of days later, Wolves visited Anfield and lost 6-0.

“Two other Wolves trips from the years soon after the war are significant. One brought the record all-time attendance at Anfield – 61,905 for an FA Cup fourth-round tie in 1952. It is a figure that won’t be reached even when the stadium redevelopment is complete.

“In the other one, Liverpool swapped the numbers of some of their players in an effort to hoodwink Wolves’ defenders. Billy Liddell played at no 11 despite being at centre-forward and the no 9 Cyril Done was on the wing. Billy Wright was one of those said to be bemused.”