Palin as a lad.

We at Wolves Heroes would like to add our own condolences to those received by the family of Granville Palin, the former Wolves youngster who has died at the age of 76.

No-one is ever going to displace Ted Farmer as the star turn in the 1958 FA Youth Cup final against Chelsea – the most famous match in which Wolves have ever been involved at anything other than first-team level.

But, as skipper of that side, Palin was very much to the forefront, too, especially after the Cullis Cubs had somehow turned round a 5-1 first-leg deficit from Stamford Bridge by winning the return 6-1.

The Yorkshire-born defender was the one to step forward and receive the silverware on an emotional May evening on which the attendance was said to have grown with each goal, the roars telling those around the town and in nearby residences that a spectacular conquest was in the offing.

So delighted was Stan Cullis when learning of the comeback while away on the first-team tour of Switzerland, West Germany and Belgium that he sent a telegram back to Palin, describing it as the best news he had ever had.

The centre-half, a former Wath Wanderer who came down to the West Midlands with Peter Clark – later to become John Rudge’s brother-in-law – was relieved and probably surprised to help create a slice of famous Molineux history.

He had missed a penalty in the semi-final victory over Manchester United, the club who had massively dominated the Youth Cup in previous seasons, then he had a close-up of the mercurial talents of Jimmy Greaves in a one-sided first leg, although he wasn’t directly responsible for marking him.

“Granville wasn’t tall for a centre-half,” Farmer said this afternoon. “He was maybe 5ft 10in and still growing, quite stocky with it. 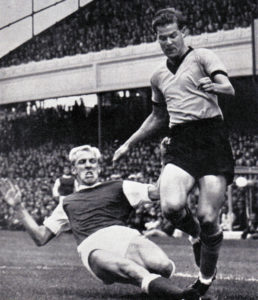 “He wasn’t particularly powerful and didn’t get stuck in like, say, George Showell did. He was more a footballing type, not particularly vocal on the pitch but with a command in his play which probably explains why he was made captain.

“Although we both lived around the West Midlands, I went donkey’s years without seeing him, as can happen, before my testimonial match in 1990.

“There was a problem with the programmes on the night and they didn’t turn up until about half an hour before kick-off, so he went round selling them. That’s the type of guy he was…..I am very upset to hear this news.

“It was very hard for a centre-half trying to get past Billy Wright and George Showell and through to the first team. Then Granville broke his leg (in a game at the Baseball Ground) in November, 1959, and that made it even harder.”

Like John Harris, who suffered similar injury misfortune a few years later, Palin moved to Walsall in 1960 and carved out an excellent career with the Saddlers that brought him the first-team football – all 140 games of it – that he had missed out on at Molineux.

His debut came in a home win over Shrewsbury but he was quickly converted to a right-back as he played 27 games in the campaign under Bill Moore in which his new club were promoted as runners-up to the Second Division.

He topped that appearance tally in each of the next three years, including a stint as emergency keeper in place of Alan Boswell in a crucial last-day defeat at home to Charlton in 1962-63.

That game marked the end of the Saddlers’ two-year stay at the higher level and Palin moved to Worcester just over 12 months later.

He had a long career in non-League football, including management spells at Hednesford, Rushall Olympic (twice) and Darlaston and was credited with helping develop Lee Sinnott and Martyn O’Connor, two local lads who had fine careers with Walsall and beyond.

More precious to him, he saw his son Leigh build a fine League career of his own, moves to Bradford, Stoke and Hull all bringing him lengthy slabs of senior football after he had failed to break through at Aston Villa and Nottingham Forest. 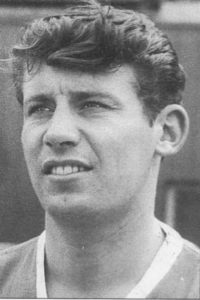 Granville during his Walsall career.

“I was born in Worcester when Dad was there,” the 51-year-old said today. “He basically packed his career in so he could follow me around when I was in the League, particularly after I joined Bradford in the mid-1980s.

“He is from Armthorpe, near Doncaster, and used to enjoy staying up for a weekend when I was at Bradford. I still live in Beverley, near Hull, but managed to get back plenty, especially when my kids were growing up, to where he and my mum have lived in Rushall from the 1960s. They were married for around 50 years.

“Dad only went into hospital for a hip replacement and was in for 16 weeks because of complications. We’re all a bit shocked at the moment and just pulling each other through.”