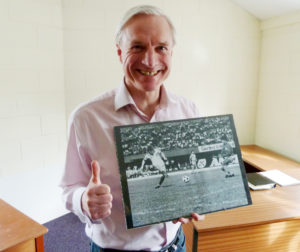 Mel Eves with a valued keepsake from his goal-scoring role as an England B player under Bobby Robson.

Mel Eves has used the week of his 60th birthday to let us in on a fond ‘reconnection’ with the international manager he relished working with.

We have written on here at length in the past about the lifelong Wolves fan’s successful late call-up to a 1978 England B tour of Australasia and the Far East that was undertaken with Bobby Robson at the helm and former Molineux player-coach Brian Owen at his side.

But Eves has now revealed how he had reason to contact the legendary national and Ipswich boss many years later in a different capacity – and clicked with him all over again.

“It was when I was involved in my agency work and I was trying to get some information for a friend at Aston Villa on a possible target called Gilles De Bilde,” the Black Country-born forward told us.

“He was at PSV Eindhoven at the time, where Bobby was in charge, so I took a chance and rang to try to pick up some pointers. I didn’t have a private number for Bobby, so I phoned the club and asked if there was any chance I could be put through.

“There was a delay and some silence, then this voice came up: ‘Hello, Mel, how are you?’ It was around the turn of the century and a lot of water had flowed under the bridge since I played for him on that trip. We had a lovely conversation, though, and I was so chuffed he was happy to talk.

“He couldn’t have been more helpful, telling me what a good player Gilles was – plenty good enough for the Premier League – and explaining that the only reason he wasn’t playing more at PSV was because he had Ruud Van Nistelrooy and other big names as competition for places.

“He spoke really well of him and I was so impressed that he had found the time to take my call and be so helpful. Not everyone in football leaves you with those memories, so for a legend like him to do that for me was something I always appreciated. He was a breath of fresh air.”

Eves’ Wolves debut was at home to Robson’s Ipswich in 1977 and he also played in the return at Portman Road on the final day of the campaign after his late-season goals had done much to keep Sammy Chung’s team’s heads above water in the survival scrap.

Eves during his Wolves career.

De Bilde, who was capped 25 times by Belgium, made his English debut as a Sheffield Wednesday player and proved a popular figure at Hillsborough. But the man whose nickname ‘Bob’ is one of football’s wittier monikers, duly had a loan spell at Villa in 2000-01.

By coincidence, it is 36 years ago this Saturday since Wolves faced PSV in the UEFA Cup – a two-leg tie in which Eves scored in the fruitless 1-0 win in the return at Molineux. It was the club’s last major European tie and that was their last European goal.

So how did the man himself celebrate his 60th birthday five days ago? With a trip to Molineux, of course, for Wolves’ home game against Burton.