Ken On Course With Old Pals 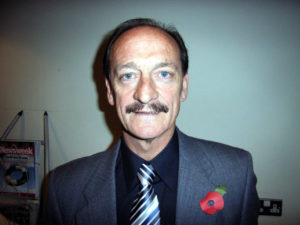 Suited, booted and ready for work……..Kenny Hibbitt in recent years.

Bridgnorth was today added to Kenny Hibbitt’s list of early-season destinations when he checked in for a sizeable reunion of the much-loved 1970s Wolves.

The legendary Molineux midfielder has already included Bournemouth, Southampton and Swansea in his 2016-17 Premier League travels and was at Sunday’s Watford v Manchester United game while several of his long-time team-mates were playing in their golf day at Wrottersley Park.

But he was on the tee at Astbury Hall with Phil Parkes, Steve Daley and John McAlle this afternoon as part of the highly successful annual charity golf tournament organised by Jason Guy.

“It has been a busy few weeks for me but that’s the way I like it,” said Hibbitt, who is now among the longest-serving of the Premier League’s referees’ delegates after the summer retirement from the role of Len Ashurst and Peter Shreeves.

“Mick Maguire and myself are the two ‘veterans’ now. This is my 14th year and I have a wider catchment area while Villa, Birmingham and Wolves are out of the top flight.

“Work is work, though, and I will happily go where it takes me. In fact I feel at a loose end if I get up on a Saturday with no match to go to as that is what I have known now for 50 years.”

Mick Harford, Micky Adams, Steve Harper, Terry Dolan, John Duncan and Clive Whitehead are among others engaged in the looking-after and assessment of match officials and Hibbitt gave us a further insight into his match-day duties.

“It isn’t just a matter of turning up and watching the game,” he added. “I am expected to be there two hours before kick-off to welcome the referee and his assistants to the ground, so that means I often arrive two and a half hours to be on the safe side.

“I didn’t even watch Match of the Day on Saturday for example because I had to be up at 5.30am and out at 6.30am to be at Watford in good time for the lunchtime start.

“After the game, I tend to give the officials 20 minutes to cool off and then go in for a de-brief before walking with them to the car park. Commonsense dictates that they don’t arrive for matches in their own vehicles….they leave them elsewhere and are chauffeured in.

“We shouldn’t forget that their routines can be tough. I know from all my years on the other side that the players are cossetted and transported by coach without thinking for themselves but Michael Oliver, for example, had to drive home to Northumberland after refereeing Watford v Man United – and he runs as far as the players, or even further, during the game. He’s also always out there for the full 90 minutes.” 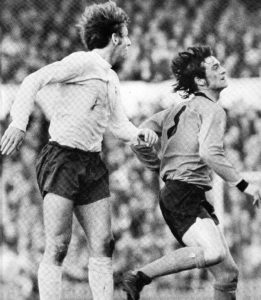 Hibbitt in a tussle for possession with Martin Peters in a Tottenham v Wolves clash.

Bournemouth v Hull and Swansea v Watford are on the Hibbitt schedule in the coming weeks – two venues he did not visit with Wolves.

“I think I have been to Bournemouth with Walsall and Bristol Rovers, though, and recall seeing a reserve game at Dean Court when Harry Redknapp was manager and his son Jamie was a 16-year-old pinging passes around with both feet,” he added.

“I think the next time I saw Jamie was many years later at a charity golf tournament organised by Andy Gray when I ended up giving him a lesson!”

Today’s tournament was set to raise around £4,000 for the Breast Cancer Now charity set up by Jason Guy set up in memory of his wife Lucy, who died from the disease in the summer of last year.

Robbie Dennison, Mel Eves, Colin Brazier, Jon Purdie and Dale Rudge were all either playing or due to attend the after-competition dinner and there was a much-appreciated appearance by Derby favourites Roy McFarland, Henry Newton, Roger Davies and Michael Johnson.