Thanks, Lads……We Will Always Be Grateful 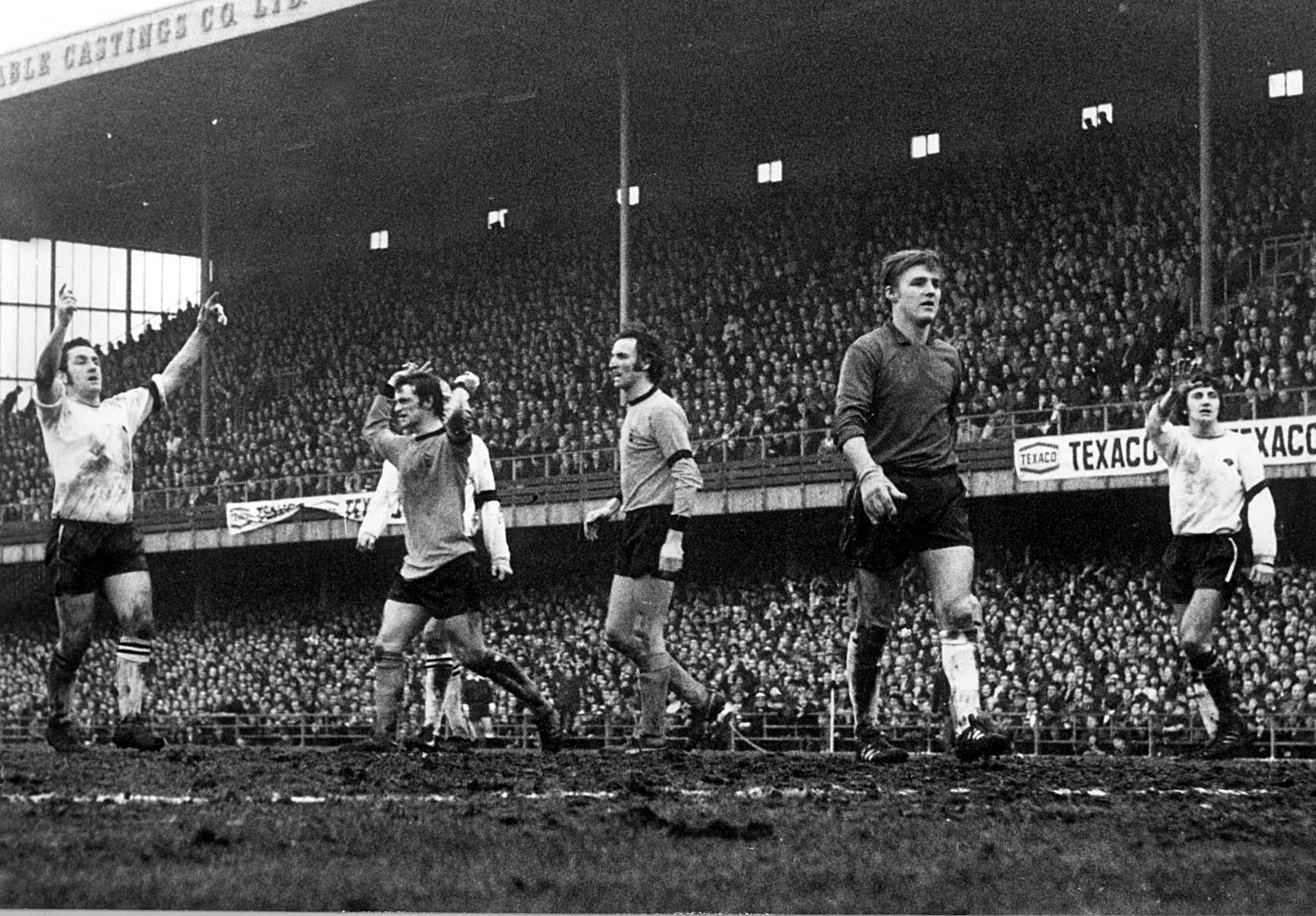 Roy McFarland (far right) about to breathe a sigh of relief as Wolves have a goal disallowed on the Baseball Ground mudheap in January, 1971.

Roy McFarland has spoken of the enormous debt of gratitude he and his Derby team-mates have to Wolves – almost four and a half decades on from their counterparts in the West Midlands giving them the ultimate helping hand.

McFarland, Roger Davies and Henry Newton, as well as the much younger Michael Johnson, were the Rams’ representatives at the charity golf day featuring a number of ex-Wolves players at Astbury Hall last week.

And the outstanding centre-half used the visit to reveal how the night of Monday, May 8, 1972 unfolded for he and Colin Todd as the League title came to rest at the Baseball Ground for the first time.

“It has been well reported how our Derby squad went off to Majorca after the end of that season – and were left hoping for the right results elsewhere,” McFarland said.

“We had beaten Liverpool in our final League game and Brian Clough sent us off for a few days in the sun and for a few San Miguels by telling us that we had done all we could do and just had to see what the others did.

“I think we believed we could still finish as champions but knew it was unlikely, with Leeds needing only a draw at Wolves or Liverpool needing to win at Arsenal to overtake us.

“Toddy and I had a few days with the squad before having to come home early as were reporting with the England squad.

“We were going to drive down to London together on the night the final matches were played and I arrived at his house in Derby with about 20 minutes left and with Wolves in the lead.

“We had the commentary on the radio and I said I couldn’t start the journey until I knew the outcome. So we listened for a while until I could stand it no more and said I was going off for a walk.

“When I came back, Toddy told me it was still 2-1 but it seemed to take for ages for the final few minutes and injury-time to pass.

“Then, when the whistle went, we were hugging each other and jumping up and down…..along with his wife and with Linda, who I was to marry some time afterwards.

“You can probably imagine what a happy journey it was down to the Hendon Hall Hotel, where the Leeds pair of Paul Madeley and Norman Hunter were also due, as well as Emlyn Hughes and Larry Lloyd from Liverpool.

“We walked in with big smiles on our sun-tanned faces and Sir Alf was one of the first to extend his congratulations. But we couldn’t be smug…..not with having England team-mates who were obviously disappointed.

“Our biggest letdown was not spending the rest of the night with the other Derby lads, who were obviously off their heads when they toasted our success.

“How did Colin and I celebrate? Well, I remember shouting at him ‘Colin, we’re the champions!’ then we had a pot of tea and biscuits and an early night! We had more games to prepare for.”

McFarland, who kindly spoke at length to Wolves Heroes yesterday, played in the 0-0 draw against West Germany in Berlin the Saturday after the title had been won while Todd, in common with his Rams captain, figured in the Home International Championship programme that followed.

Derby, like Leeds, were beaten 2-1 on their 1971-72 League visit to Molineux and had to work very hard to reverse the scoreline in the New Year return at the Baseball Ground.

Clough’s men had also been beaten by the same margin when their notorious home ground was visited the previous winter by a Wolves side on course for qualifying for the UEFA Cup through their First Division placing.

“I think we might just have shaded our matches against Wolves but they were always tough games,” McFarland added.

“Although Forest and Leicester were seen as our main derbies, we also relished facing the West Midlands clubs as they were close and, like the Baseball Ground, I used to think Molineux was a harder place for away teams to go at night. It was quite intimidating.

“It was great to see Phil Parkes at the golf last week – he’s a smashing lad – and he and Kenny (Hibbitt) are always happy to chat about that win over Leeds because it was so huge.

“That was the fixture we were worried about because Leeds had the momentum of winning the FA Cup final on the Saturday and needed only a point to overtake us. They were also a really super team when they played their football, although they had this tag as a dirty side as well because they could be over-physical.” 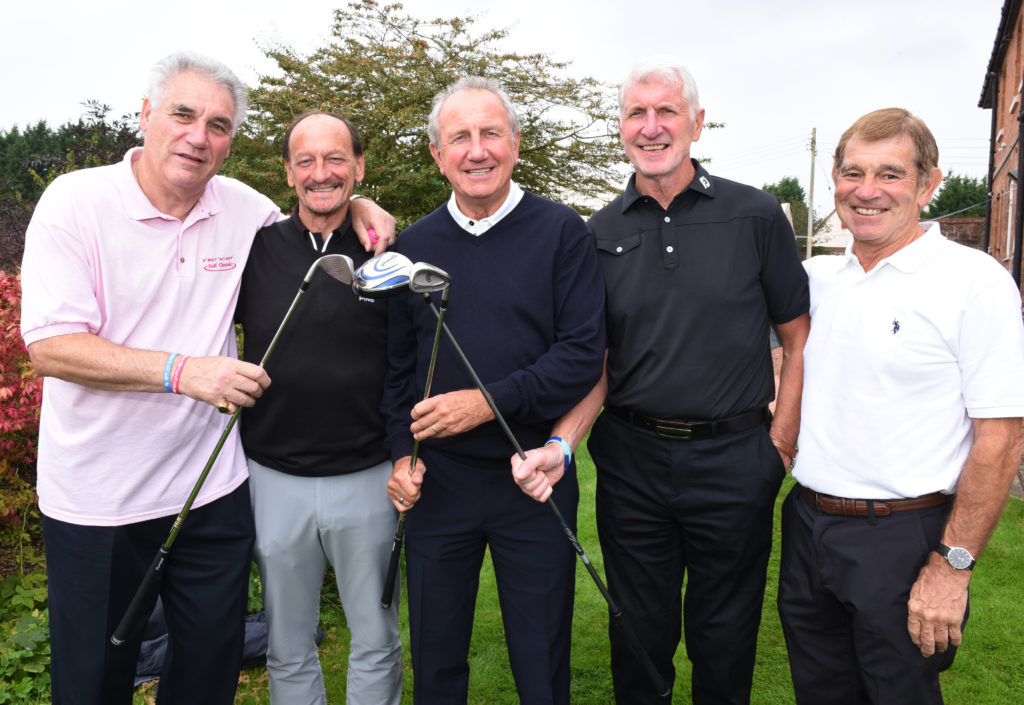 McFarland remains a keen watcher of the game and will be impatient for Wolves, as well as his beloved Derby, to climb out of the Championship.

“I would love to see both clubs back up there towards where they used to be,” he said. “It would be tremendous if they were meeting again in the top flight. Derby are the club closest to my heart but I have a real soft spot for Wolves.

“They must have given absolutely everything that night. How grateful are we to them!”