Loyal Servant Chalked Up The Full Set Of Roles 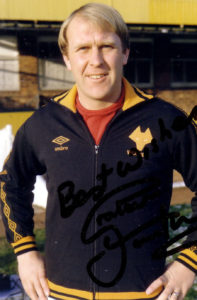 And so another one leaves us ahead of his time. Graham Hawkins – tall, bronzed and with a physique to be seriously envied – has gone at the age of 70.

It’s bad enough when we bid our farewells to Wolves favourites in their 80s and 90s. This seems way too young to be saying goodbye.

We had all known about the health battle…….the cancer diagnosis seven years ago last month and the spells of hospital treatment, including one as recently as this summer.

But London Wolves members had seen him in good spirits at their 50th anniversary dinner at The Valley in July, so we had little reason to fear that sad news like this lay just around the corner.

Graham was one of those thoroughly decent guys we just got used to seeing around; upright and imposing. Classy, with it, too.

Certainly, he never needed an introduction at Molineux, where he was a paying fan, then a player, then the manager and in subsequent years a scout. Not even Stan Cullis or Major Buckley could tick all those boxes.

Every bit as worthy as those entries on the CV, though – and poignantly so in retrospect – is the selfless charity work he accomplished by organising two successful dinners in 2012 to raise funds for the cancer unit at Royal Shrewsbury Hotel.

There was some irony in the fact that Graham Turner spoke (free of charge) at both functions – first at Shrewsbury’s Greenhous Meadow Stadium and then three months later at Molineux. The two worked together in the early 1980s for Shropshire’s only League club, with Turner’s seniority leading some to speculate that it was he, not Hawkins, who was being targeted by new Wolves chairman Derek Dougan in the relatively calm early days of the Bhatti era in 1982.

There was an element of ‘Graham Who?’ when The Doog made his left-field appointment, if only because his Wolves team-mate of a decade and a half earlier was hardly a familiar commodity in the dug-out. 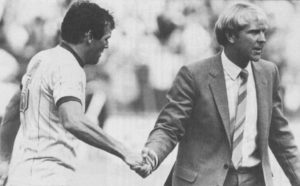 The blond 36-year-old was landed with the job of arresting the slide that had just dumped the club of his youthful dreams in the Second Division and famously had them lurching to within three minutes of oblivion. He did much better than stop the nosedive. He reversed it.

Hawkins’ immediate response was to send for the kids. The 1970s survivors like John Richards and Kenny Hibbitt didn’t have many miles left in the legs and the on-going flirtation with financial strife meant that Andy Gray was always likely to be a cut-price target for the vultures circling above.

Although Geoff Palmer was still around, Hawkins threw a side together at short notice for the season’s opener at home to Blackburn and three points against one of his and The Doog’s former clubs, soon followed by a string of clean sheets, provided unexpected early momentum.

Jim Barron, a one-time Molineux team-mate of the manager’s, had been drafted in as his loyal no 2 and, for many months, they, their squad and the supporters rode the wave.

The journey was all the more enjoyable for being unforeseen, built as it was with the newish breed of Clarke, Eves, Humphrey, Matthews and Pender well to the fore. As if Molineux wasn’t enough fun in those revivalist months, John Burridge was an ever-present in goal.

Promotion was duly accomplished but Wolves rather fell across the line and there was an apprehension that the success was built on unsteady foundations. Fantastic team spirit counts for so much but substantially more quality was ultimately going to be required.

Hawkins knew the limitations of his uplifting, buoyant squad and drew up a wish list of players containing the names of Gary Lineker, Paul Bracewell, David Seaman and a robust Yorkshireman called Mick McCarthy. He got Tony Towner – and The Doog signed him while the manager was on holiday and blissfully unaware of any Molineux interest in him.

The follow-up struggle was predictable and the chronic under-funding came back to haunt all concerned. Wolves went down again with a bump and it was in a familiar direction that the board turned when they decided a head had to roll. 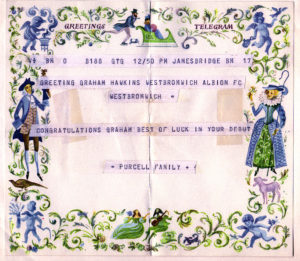 Telegrams were mainstream forms of communication once….as shown by this good-luck message before Hawkins’ debut in the game at Albion in September, 1964.

The Wolves that Hawkins managed for two chalk-and-cheese seasons was a different beast (pun intended) to the one he played 35 first-team games for in the mid-1960s.

As a Cullis cub, even before his League debut in a defeat at Albion, he went on tour to the West Indies and then collected more stamps on his passport three years later by going with the club to the United States and Canada. He found his employers sensitive enough to allow him to return home early from the marathon latter excursion in 1967 to marry his childhood sweetheart, Jane.

Not until the few weeks immediately before England’s World Cup triumph did he began to find his first-team feet and he built on that impact by switching from the no 5 jersey largely to no 6 when handed another 17 senior outings in the promotion-winning campaign 12 months later.

The parting of the ways came when Preston moved in for the Darlaston boy, who became a firm favourite at Deepdale during more than 250 senior outings. Well over 100 followed at Blackburn and the 70 or so he amassed at Port Vale took him to around the career 500 mark. Quite a tally!

But we aren’t talking here about a one-track mind. Hawkins might have gone on to head up the Football League’s player development programme and have various coaching assignments, including one in Saudi Arabia, but it seems the endless treadmill of precarious backroom jobs wasn’t for him.

While with Preston, he bought a garage near Deepdale with his former Wolves colleague Ken Knighton and boxer Bob Rhodes and stayed with the business for the best part of a decade. Much more recently, he was also engaged in the pub trade.

We were lucky enough to twice visit Graham at his lovely home on the border of Shropshire, Staffordshire and Cheshire, from where he loved to strike out to meet golf pals like Richie Barker and the 1967 Aberdeen squad man, Ian Taylor, at Market Drayton. 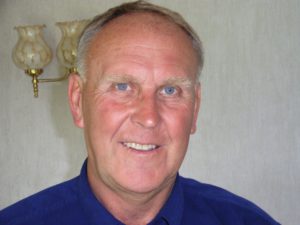 Photographed in 2009 at the end of the week in which he was diagnosed with non-Hodgkin lymphoma ….

In return for his kindness in purchasing a couple of copies of the Frank Munro biography from us, we were delighted to reconnect him over coffee several years ago with a long-lost Molineux colleague, Ian Wallace.

The turn-out at his funeral will reflect the huge respect and affection in which he was held and that’s not all of it. Fittingly, Graham Turner will be part of the proceedings when a minute’s applause is held at Wolves’ home game against Norwich tomorrow.