Higher And Higher…….Fund Made Famous By Bert 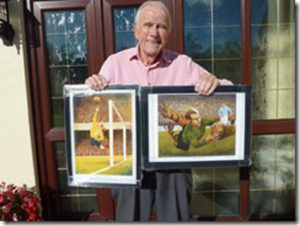 Glyne Wetton with two of the re-framed keepsakes.

Twelve prints that formed part of Bert Williams’ massive memorabilia collection have been sold off cut-price to further boost the colossal money-raising efforts he made on behalf of the Alzheimer’s Society.

The framed pictures, most of them depicting his notorious agility and bravery, were frequently displayed when the keeper and his close friend Glyne Wetton used to take them round as props on their charity nights.

Now, they are in fresh hands after the decision to close that part of the hugely successful fund-raising push.

“I am now in my 80s and too old to stand around in pubs,” Glyne told Wolves Heroes this week. “As Bert was, I am also teetotal, so I decided to sell the prints off for £50 each.

“His Alzheimer’s account already stood at £175,201 and now we have raised another £600 through these prints. They were very good value as they are all signed on the back by him and are as good as new after I paid to have them all reframed at £20 a time.”

Among the scenes captured are saves Williams made in the snow in a famous FA Cup tie against Charlton in 1949, away to Manchester City in the League and against Arsenal at Highbury. His England career, as well as his legendary one at Molineux, are covered. The collection also contained a picture of Pele.

A businessman has purchased all 12 to hang on the walls of the company for whom he works.

The outstanding keepsakes are the work of renowned sports artist Brian West, who was asked to produce them as part of Bert’s determination to support the Society following the loss of his wife Evelyn in 2002.

At the age of 82, he set himself the target of raising £100,000 but increased the figure by 50 per cent after reaching his original goal in 2010, just after he was awarded the MBE.

He has an account on Just Giving and topped £150,000 in December, 2013 – a huge achievement that was marked by the appearance of three Alzheimer’s Society directors to present him with a commemorative certificate. 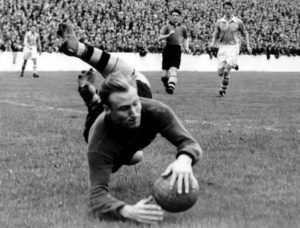 One of the saves, in black and white, that was transferred to life as a colour print.

“In passing, they said their funds were down by over 30 per cent that year due to the financial climate, so Bert’s donations had been absolutely invaluable,” Glyne added.

“Since then, I have continued to raise funds for his account by visiting pubs and organising raffles. I have also been helped greatly by Gordon Banks, who, as long as I go up to his home near Crewe and drive him down, will speak at events for no fee, providing the organisers donate £2,000 to the account.”