Full-Back Who Wolves Didn’t See The Best Of

A few fleeting early-1980s glimpses in Wolves’ first team is only a small part of the Mick Bennett story. Charles Bamforth wanted to learn much more…..

Ask pretty much anyone in the world to name a football club and I am pretty confident you would hear the words Manchester United before long.

Their reach seems to be endless, so perhaps it should come as no surprise that they have a presence on the ground in the most outlying of places. Locations like Baku, the capital of Azerbaijan and the largest city on the Caspian Sea. 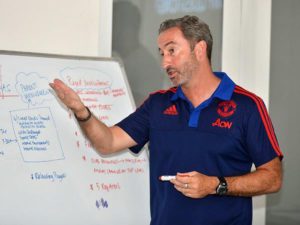 The head coach for the United youth set-up there is Mick Bennett, who spent too brief a time with Wolves. For a man born very much within commuter distance of Old Trafford, the former full-back has certainly put in some miles in a football career spanning 40 years.

“I was born in Bolton on Christmas Eve in 1962 and attended Hayward Grammar School,” he said. “I was always a winger or forward for school and boys’ clubs.

“I got to the last stage of the England schoolboys’ trial but was injured before the final selections, so I missed out. However, I did go on to play nine times for England Youths and captain them on four occasions. It could have been more had I not been in the Bolton first team at 17.

“I supported them from as early as I can remember. I must have been seven or eight when I first went to a game at Burnden Park. My all-time heroes were Peter Thompson and Frank Worthington. When I joined the staff, I was Frank’s boot man and went on to play with him at Preston.

“Manchester City wanted me badly enough when I was 15 or 16 that they offered my mum and dad a new car and a house. Malcolm Alison was manager.

“But it was my dream to play for Bolton and my parents were happy for me whatever I decided. A big part of me signing for Bolton was manager Ian Greaves, a fantastic coach and person. Sadly, he was sacked just six months after I signed.

“George Mulhall was a fiery Scottish coach, Stan Anderson the complete opposite. John McGovern and I didn’t get along.

“I was unhappy the way I left my home-town club. It meant everything to me to play for them. Apparently, they reckoned I was on too much money from the successful period when Ian Greaves was manager, so I was part of the financial crisis at the time. Obviously McGovern didn’t consider me as part of the future.”

Mick made his debut for the Trotters as substitute for Paul Jones at Maine Road. “I played for the last 25 minutes or so, which was quite ironic as City were the club for whom I might have signed. My full debut came against Manchester United when I was 17 years and four months. 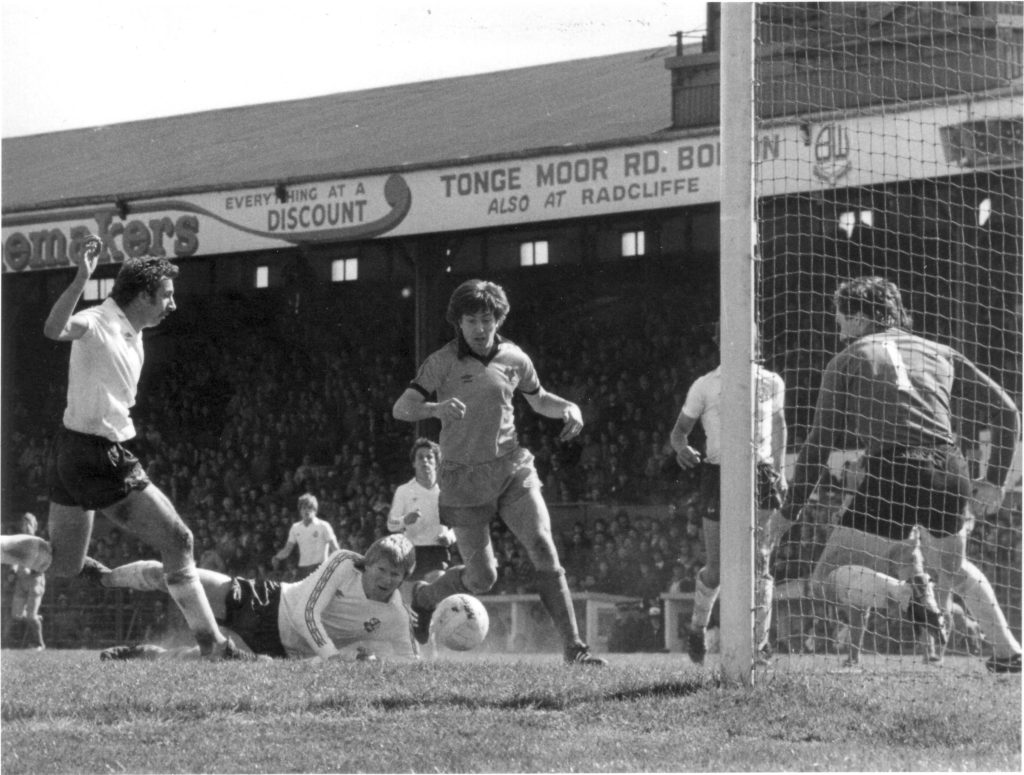 John Richards challenges in the deadlock at Burnden Park in May, 1980.

“Being a Bolton lad, I couldn’t have chosen a bigger and better team to face. I will never forget the occasion, with all my old school mates and family in the crowd. My opponents were Steve Coppell and then Ashley Grimes.”

One of the last games of 1979-80 saw Bennett in a no 11 shirt against Wolves – a 0-0 draw at Burnden he has no memory of. But he certainly does remember fondly his time with England Youths.

“We won the Euros in 1980 in Liepzig. I was also selected for the under-21s to play in the World Cup in Australia but had to miss it because of first-team duties. Mitchell Thomas from Luton took my place.”

Come the summer of 1983 and it was time for Mick Bennett to move on from his beloved Bolton.

“I had agreed to sign for Trevor Cherry’s Bradford City for £20,000,” he went on. “They were in Division Three but Wolves came in for me and they had just been promoted to the First Division.

“I still had aspirations of playing at the highest level and playing for England, so I had to drive to Bradford to explain to Mr Cherry and his assistant Terry Yorath that I was going to Wolves. They weren’t happy but understood my reasons.

“I actually joined Wolves for less money but I was ambitious. I don’t know if a fee was agreed but I do believe there was a deal for Wolves to pay depending on appearances.

“Under Graham Hawkins, I only made nine appearances at Wolves – very disappointing. I was shocked to hear that Graham had died recently. I don’t think he took to me as one of his players. I never really found out why.

“But I loved the club and the fans. I don’t really think I was given a fair chance. The team struggled that year and there were a lot of young players in the squad.

“I wish I had stayed another season instead of joining Cambridge United but the manager made it clear he didn’t want me. He got sacked a few months after I left and I look back and think if only I had hung on a bit longer  but I was 20 and needed regular first-team football. 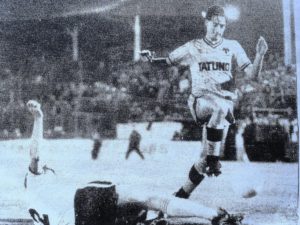 Bennett on the charge in Wolves’ Milk Cup exit at Preston (one of his subsequent clubs) early in 1983-84.

“Jim Barron and Frank Upton were good with me but Graham made the decisions. I got injured early pre-season and needed a hernia operation. I don’t think that went down too well.

“I lived in a club flat in Perton and my closest friend was Paul Bradshaw. I tended to stick with the younger players, like Bob Coy, Billy Livingstone, Dale Rudge, John Humphrey and Mick Matthews. I also remember John Burridge and Kenny Hibbitt being really nice guys who wanted to help the kids.

“I moved to Cambridge after a loan spell there. I didn’t really want to go but I felt I was forced out on a free. They were in the Second Division with a young squad.

“Andy Sinton and David Moyes were there, the club were probably punching above their weight but they were ambitious and that attracted me.

“Unfortunately, it turned into a bit of a nightmare and we dropped down through the divisions. We had a number of managers (John Docherty, John Ryan, Ken Shellito and Chris Turner) but they were all inexperienced and there was no foundation or continuity to the team or club. It was a very difficult time for the young players especially.

“I left Cambridge in February, 1986 after over 100 games and tried my luck in Finland. I returned fit for the start of the new season and signed for John McGrath at Preston. Brian Kidd had tried signing me there earlier but was sacked before I put pen to paper. My time at Preston was the happiest since my days at Bolton.

“I joined my old team-mates, Frank Worthington, Warren Joyce and Sam Allardyce. We won promotion in the first year, a season after the club had been rescued from the brink of extinction……a bit like Wolves in earlier years.

“McGrath was a brilliant manager, a psychologist. He really got into players’ minds. I’m sure that is where Sam Allardyce learned his management style.

“I played over 100 times for Preston, where the fans were fantastic. Unfortunately, just as my career looked to be on the up again, I suffered a broken leg at Blackpool.

“Preston had apparently agreed the week before to transfer me to Newcastle in the First Division for £250,000. I was out for a year and never the same player again.

“I moved on to Carlisle in July, 1990 but was unlucky with injuries and broke my right fibula and damaged ankle ligaments during my time with them under Clive Middlemass. I only played around 25 games while at Brunton Park.

“I had a spell at Bury before calling an end to my professional career. I went on to play in the Conference for Sammy McIlroy and Northwich Victoria and played in the Unibond for Curzon Ashton, Atherton Collieries, Atherton Laburnum Rovers and Tempest United. I finished completely at 40. 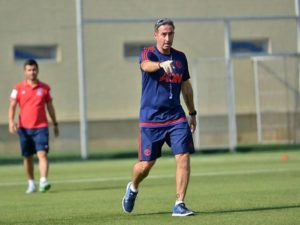 Have bags, will coach……

“I managed a family business for a few years but have been coaching since 1999. Sam Allardyce gave me an opportunity to work with the Bolton academy and I spent nearly ten years there.

“I coached at Wigan and Blackpool and was Centre of Excellence manager of Yeovil for a year. I was head coach for the Manchester United soccer schools in Mumbai, India, for another two years and that led to my current role in Azerbaijan.

“I work with three development squads – under-13, under-12 and under-11. The plan is to eventually provide the national team with players at under-15 and under-16 level. I have been here for two years now as part of a four-year contract.”