We kick off the week of Graham Hawkins’ funeral with a personal appreciation from a fan well known to Express & Star readers.

John Lalley, the paper’s chief terrace voice over the last decade, did not know the former Wolves fan, player, manager and scout well and regrets the fact that he couldn’t have become better acquainted with him.

But he was happy to share with our readers the brief acquaintance of the man whose recent death shocked his huge circle of friends. Graham Hawkins pictured during the 1960s.

In an email to us, John said: “He was a real gent, as you no doubt knew far better than me. He always had a place in my affections.

“He coached me at Wolverhampton Racecourse when I was about 13. He was extremely pleasant and I remember he had a real work ethic, expecting things to be done properly and with full commitment and attention. They were excellent sessions.

“I have never forgotten him playing at Derby on Boxing Day during the 1966-67 promotion season. He had been filling in for John Holsgrove (another top guy) when he was injured and carried off. We thought he had broken his leg.

“He was okay but that really was as good as it got for him as a Wolves player. He was playing superbly at the time and the injury came at the worst possible moment. He struck me as a terrific pro.

“He was a former pupil of the school I taught at in Darlaston. When he became Wolves manager, he came to the school and gave us a great talk, followed by questions and answers. He was brilliant, thoroughly pleasant and massively respectful to one and all.

“Later, when unfortunately he was not being financially supported after winning promotion, I arranged with him for some kids to visit Molineux on a match day.

“I forget who the game was against but he organised it so we went into a reception room, where he promised to meet us at 2pm for a quick chat. 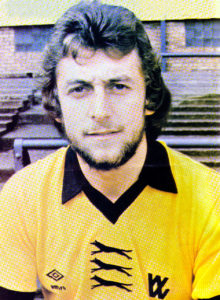 “He turned up as promised and was meticulously pleasant and friendly considering it was so close to kick-off. It transpired that, just minutes before, he had endured a blazing row with (I think) Peter Daniel, who apparently was bellyaching about being asked to play in a position he didn’t fancy.

“Wolves were in disarray, Graham was under massive pressure yet he felt he owed us his time and you wouldn’t have had a clue from his demeanour towards us that anything was up.

“He was fantastic and I have respected him ever since. I never met him again, which is a damn pity because I wish I could have told him that my respect for him was huge. Great guy!”