Huge Turn-Out To Hear Of ‘A Life Well Lived’

Full House – And Then Some – At Emotional Service 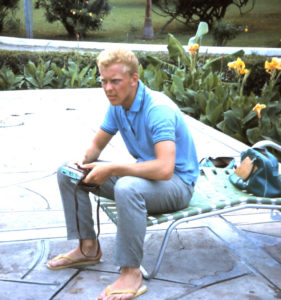 Graham Hawkins away on tour in his embryonic Wolves years.

More than anything else, the size of the turn-out told the story. “It’s very rare that we get what you might call a capacity crowd,” said the Reverend David Wright. “It’s a real tribute to Graham Hawkins that we have one here today.”

‘Standing room only’ barely starts to explain what a tight squeeze it was in Bushbury Crematorium’s west chapel. There were at least twice as many stood at the sides as there were seated and we learned later that around 30 others, including Mike Bailey, John Richards, John McAlle and Phil Parkes, had been shoe-horned into the foyer, following proceedings as best they could on a TV screen. Maybe this should have been one of those all-ticket funerals!

The close and extended family, plus the football fraternity beyond, came to pay their respects to a man of whom it is difficult to find anyone with a negative word.

It wasn’t just those of a Wolves connection either. From Blackburn, there was boardroom representation plus Derek Fazackerley, a central defensive partner of Hawkins’ when Rovers were winning the 1974-75 Third Division.

The star Stoke duo of Denis Smith and Terry Conroy attended as a nod to the time he spent across the Potteries with Port Vale at the end of his long playing career, plus the latter-day work of the 70-year-old with the Football League and in youth development.

Shrewsbury could lay claim to sending Graham Turner and Richie Barker – two men also highly recognisable from the Molineux dug-out – and there were various League and FA officials, as well as journeymen pros such as Dave Regis, Bob Bloomer and Steve Hetzke. And they were just the ones we were able to identify.

There must have been approaching 300 there in all and the Wolves names tripped off the tongue well beyond the heroic 1970s quartet named earlier…..Ted Farmer, Terry Wharton, Jim Barron, Steve Daley, Mel Eves, the popular early-1980s defender Alan Dodd and John Doughty, who was on the fringes of the Wanderers squad who reached the final of the 1962 FA Youth Cup and included Graham as a house guest at a wonderful reunion of that group four and a half years ago.

In addition to Hawkins’ well-known stints as a Wolves player and manager, he scouted for them and even assisted considerably with the setting-up of their highly successful academy.

It was only fitting therefore that there was a sizeable cross-section of present-day and recent staff from the club, namely managing director Laurie Dalrymple, secretary Richard Skirrow, historian John Hendley, archivist Graham Hughes, former youth department supremo Chris Evans and recently retired scout Les Green. Doug Hope and Dennis Conyerd, a director and the physio from the 1982-84 era in which Hawkins was manager, were others to sign the book of condolence passed around Molineux’s WV1 room at the buffet afterwards.

“The capacity crowd says something simply but very profoundly about how Graham touched the lives of many, many people,” Reverend Wright added. “And only a fraction of those people are represented here.” In reflecting his virtues, he went on: “He had much to shout about but was so modest about it.” 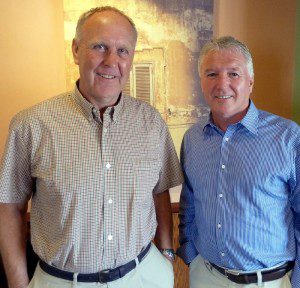 A reunion, 40 years on, with 1960s Molineux reserve Ian Wallace.

It is impossible on such occasions to overlook the grief of the nearest and dearest – and very often the courage of the offspring(s) who step forward to address the gathering.

The challenging task today fell to youngest son Richard, the head of sports science at Manchester United, who told us of his dad’s arrival in this world at ‘a whopping 12lbs’. The big feet perhaps had him marked out as a footballer early on and, when it was time for trying to impress his childhood sweetheart Jane on the dance floor, he took the unusual step of asking a former girlfriend for some tips.

The outpouring of a family’s love gives us fresh insight beyond what we know about heroes from former team-mates; in this case, for example, the Hawkins’ holidays spent in a B & B above Joe Mercer’s place in Cornwall – when ‘so many players seemed to be there.’

Richard also spoke of how the post-Molineux time in Bahrain brought December 25 festivities, wind surfing and keepy-uppy games on a sheikh’s beach after 22 successive Christmas Days of working in preparation for Boxing Day action – something he termed ‘the best family time.’

With brother Ian, who works in Wolverhampton’s financial sector, he and Dad also used the posting to compete once in the Bahrain Relay. It was a far cry from the contrast provided by immediate unexpected promotion with Wolves and predictable subsequent relegation after the surprise call back to the club of his youthful dreams.

“The two of us became ball boys in 1982-83 and someone decided we should be positioned either side of the dug-out to curb his language,” Richard revealed. “The swearing became worse the following year!” Wife Jane, with whom he had this year moved home to a few miles north of Stafford, probably had mixed feelings…..

After the singing of ‘Abide With Me’, the only hymn, we exited to ‘Golden’ by Cliff Richard (how appropriate is that song title?) and pored outside over photos brought along by school colleagues, even those from his days in the primary and junior back in his native Darlaston. The turn-out was far-reaching as well as massive. 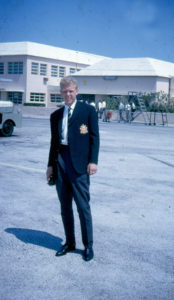 Hawkins on his travels with Wolves to the Caribbean in 1964.

“He was a leader, a true gentleman, loyal and considerate,” Richard summed up. “He could hold an audience, although I’m sure there’s a lot that will be said today that I didn’t know. He was someone you could all count on and call a friend.

“Yes, we are distraught, devastated. But we must celebrate the life he had and the friendships he brought together.”

It was, as the Reverend Wright said, ‘a life well lived.’