No Easing Up For The Skipper

Bailey Back Again To Say Thank-You 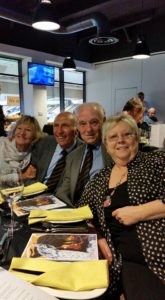 Mike Bailey and Terry Wharton with wives Barbara and Sue at Molineux yesterday.

Mike Bailey has put a happy-ish end to a difficult and exhausting week by making another trip to Molineux in honour of the London Wolves Supporters Club that he has such a close friendship with.

The long-time skipper, along with wife Barbara, was at the stadium as recently as Wednesday following the funeral of his former team-mate Graham Hawkins.

That necessitated a 6am departure from their home in Surrey – not an easy task as Bailey had spent the previous night with his son and a friend taking in Wolves’ 1-0 defeat at Brighton.

Yesterday’s return trip to the West Midlands meant another early morning on the road, with the latest celebration of London Wolves’ 50th birthday celebrations comprising a lunch held in the Stan Cullis Stand’s WV1 room and then an evening visit to an Italian restaurant in the city.

It’s not the sort of schedule we would normally associate with a 74-year-old but he said: “I always like to support the London Wolves as they have been such brilliant supporters of the club down the years.

“And Graham was a good friend who I played alongside here for a while, so I didn’t want to miss that during the week. We also went to Charlton to see their game against Coventry last weekend – it has been a busy time.”

What Bailey could well have done with to make his itinerary easier was some points and goals but Wolves followed their defeat at Brighton – another of his former clubs – by going down by the same score in the follow-up against Leeds.

Yesterday’s lunch was to commemorate it being 50 years to the weekend since London Wolves first travelled together to a Wolves game as a group – for the 2-1 home win against Plymouth in our World Cup winning year.

A true inspiration on the field.

Bailey was captain at that time, having been elevated to the role in succession to Bobby Thomson starting with the victory at Carlisle a few weeks earlier in the promotion campaign under Ronnie Allen.

Also present at the lunch with the loyal London Wolves membership was Terry Wharton while Phil Parkes and Mel Eves joined more than a dozen members for dinner after the game.