Cup Hero Who Lit Up Wembley

Wolves’ history is littered with players who arrived in these parts from different corners of the UK, married local girls and stayed in the area; Liverpudlian Jimmy Dunn, for example.

Sammy Smyth, who outlived his fellow inside-forward by almost two years in becoming the last survivor of the first post-war Wolves team to win the FA Cup, was one of those of whom we saw much less.

Although he, too, wed a Wolverhampton lass and returned here from time to time even into his 80s, he was very much drawn back to his native Northern Ireland and was there around a decade ago when I interviewed him for the only time.

I recall a deep voice, a very strong accent and a dry sense of humour……distinctive qualities that marked him out and made you wish you could have seen and heard much more of him. No wonder he has been described by family members this week as having had great character and a twinkle in his eye.

“It is pronounced Smith, not Smythe,” he told me, putting one common misconception to flight. But didn’t the man with the plummy voice on those Pathe News reels call him the latter? “I gave up trying to tell people in the end!” he added.

You Tube apparently does only partial justice to the most famous of the 43 goals he scored for Wolves. ‘One of the best ever seen at Wembley’ is a compliment conferred on it by those lucky enough to have been present at the 1949 Cup final victory over Leicester but the surviving footage just shows some of the early build-up and then, after some clumsy editing, Smyth’s clinical left-foot finish across the keeper.

How vital he was in that historic run. He netted twice in the 6-0 third-round thrashing of Chesterfield, once in the fifth-round conquest at home to Liverpool and then the close-range headed winner at Goodison Park in the semi-final replay against Manchester United, who had also had their defence breached by him in the original meeting at Hillsborough a week earlier.

The facts and figures are impressive, debut day having come in a 4-3 defeat at Manchester City on the opening day of 1947-48 towards the end of a summer in which Wolves manager Ted Vizard paid Dundella £1,100 for him.

Already an Irish amateur international from his time with Distillery, Smyth hit a brace in an 8-1 rout of Grimsby on his home bow in the following midweek and struck again when Blackburn were thumped 5-1 only three days later. 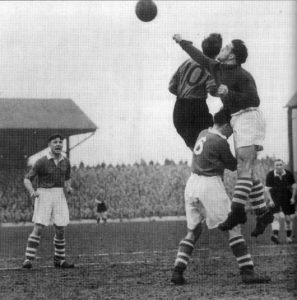 The inside-forward challenges in a game at Middlesbrough in 1950.

He levelled off following this dizzying introduction to League football but contributed five more goals in the campaign, all while wearing the no 10 jersey, and became even more established in the Cup-winning season by finishing as the club’s leading marksman with 22 from a total of 46 Division One and FA Cup games.

He and Dunn, who each lived to the age of 91, switched inside-forward roles either side of centre-forward Jesse Pye and needed to maintain high standards. The young Dennis Wilshaw scored ten times in only seven appearances immediately prior to Wembley, so there was a fierce clamour for places on the biggest stage.

Cullis stayed loyal to his Cup fighters, though, by naming the forward line that had played throughout the previous six matches in the run and Smyth delivered the killer third goal at the twin towers after Second Division hopefuls Leicester had pulled one back and had what would have been an equaliser disallowed for offside.

Sammy is not prominent among the players ‘chairing’ Billy Wright on many of the post-match celebration photos and the Bills – Wright, Crook and Shorthouse – were infiltrated only by the two-goal Pye at the head of the queue when the players went up to receive their silverware and medals from the young lady still known as Princess Elizabeth. But he was pictured pouring champagne into the Cup afterwards.

International recognition had by now come Smyth’s way, with his debut against Scotland in his native Belfast being marked by a 2-0 victory in which he scored both goals. His second game was a draw at Goodison Park against an England side inevitably containing his club captain.

Eight of the nine full caps (with five goals) this former Irish League representative and Linfield man won came while he was at Wolves, the last one following a few weeks after Stoke had signed him for a club record £25,000 in September, 1951.

His Molineux stay ultimately stretched to 116 League and Cup matches, his goals therefore coming at the rate of well over one every three games in a team who tailed off for a couple of years after being pipped to the League title on goal average by Portsmouth in 1949-50.

The presence of Roy Swinbourne and Johnny Walker weakened Smyth’s hold on a place and Cullis had presumably seen enough of Peter Broadbent’s prodigious talent to convince him he should clear the decks a little. Before departing, Smyth made only one Wolves appearance in the 1951-52 campaign and marked the occasion with a goal at Blackpool. 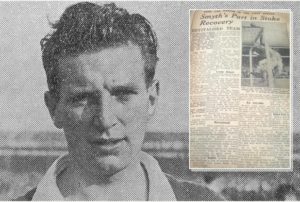 How the Stoke Sentinel reflected on his life and career this week…..

Despite playing largely in relegation-threatened teams, he chipped in with 19 goals from 44 appearances in the Potteries and, from January, 1953 after being sold by the former Wolves full-back Frank Taylor, 20 times from 44 outings for Liverpool.

The Stoke Sentinel reports that Smyth produced a man of the match performance on his debut in a win at home to Burnley and even caught and carried to safety a fox terrier that had invaded the pitch. He remained the Potters’ costliest buy for more than a decade until the arrival of former Wanderers wing-half Eddie Clamp from Arsenal and was both their and Wolves’ oldest surviving player come the time of the news that has had flags flying at half mast at Molineux this week.

Liverpudlian life offered Smyth an easier route home and he played across the Irish Sea for Bangor while and before settling into a successful post-football career that took in spells as a bookmaker, a shopkeeper and, for many years, a wholesaler and distributor of sports equipment, working with major companies like Puma, Peter Storm and Slazenger.

Home for several decades was Holywood in County Down but, following the death of his wife Enid in 2002, he used to go to stay for the winter with his daughter Sheena in Georgetown in the Cayman Islands each year. We trust it is no coincidence that his return used to be planned for the beginning of March just before for the Cheltenham Festival.

It became clear several years ago that Sammy would not be coming back any more as he was suffering badly with Alzheimer’s – news that made those occasional earlier visits here, including for the launch of the Forever Wolves book in 2002, something to be cherished even more. 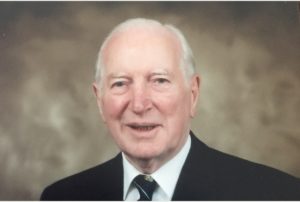 A much more recent photo of Sammy.

He leaves behind a son Ian, 61, as well as the 58-year-old Sheena, plus grandchildren, Jennie, Lauren, and Lara.

Smyth’s family are holding a funeral a week on Saturday in the Cayman Islands before returning his ashes to his church in Glencraig, County Down.