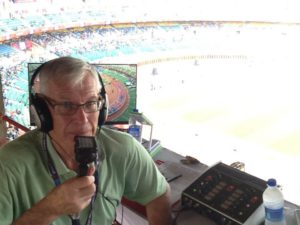 John Helm….working away in the environment he knows best.

We continue our occasional series focusing on men in the media by presenting the results of a lengthy chat with commentator John Helm – not only a good friend to us over many years but also to various former Wolves favourites.

Considering he has been busy covering tournaments in Jordan and India even since commentating at the Rio Olympics, we consider ourselves fortunate to have caught up with John Helm.

Luckier still to learn that he keeps a meticulous record of every match he has ever reported or commentated on……professionalism that makes his many Wolverhampton Wanderers memories all the easier to tap into.

Going back to the start of his working life in 1959, this veteran of our TV screens has some serious stories to tell and kindly stepped in as the latest of the media personnel we have interviewed for their recollections of Molineux and beyond.

“My record book tells me that Wolves’ game at Huddersfield this August was the 90th match of theirs that I have attended,” he said.

“The first time I saw them was at Leeds in 1959, when they were on their way to winning the League Championship for the third time.

“The movement of Jimmy Murray and Micky Lill left an impression on me. Peter Broadbent really caught my eye and I was so proud that I later got to know Billy Wright, who also played that day.

“I couldn’t call him a close friend but met him many times through work, when he was head of sport at ATV and Central TV and I was with Yorkshire TV.

“I would represent Yorkshire at meetings of the different ITV regions, often in London, and he would be there…..a genial, lovely, lovely fellow. Everybody said the same about him. He was too nice to have been a manager and was very popular…..he was very much one of us when I came to know him.”

Stand by…..there will be plenty of name-checks for major figures from Wolves’ history. 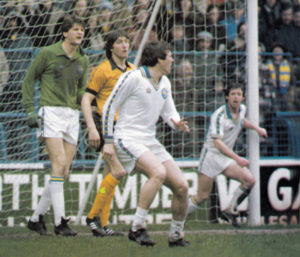 “Derek Dougan was my co-commentator when I moved into TV in Yorkshire in 1981,” he added. “He was an engaging individual who I stayed in touch with for quite some time.

“He was brilliant with all the guests when he came to speak at my cricket club and I recall working with him when my second game took me to Leeds v Wolves in 1981 and there was another afternoon with him at Sheffield Wednesday. He was chairman by the time I saw him going into the dressing room after a match at Barnsley when Gordon Smith scored in their promotion season of 1982-83.”

Helm grew up supporting Bradford Park Avenue, born as he was in the suburbs four miles north of the city centre. The closest he came to seeing Wolves at his local club, though, was witnessing the emergence of a young Kenny Hibbitt.

He watched the midfielder on countless subsequent occasions both when working for Radio Leeds and when given national duties on what some still called the wireless.

“My first working visit to Molineux was, of all games, for the title decider there against Leeds in 1972,” he added. “I was a young reporter on Radio Leeds and the highlight of my night was listening to Peter Jones in full flow. I was in utter awe of him. Everything was off the cuff…….he was wonderful.

“Another meeting of the clubs was a 3-1 win for Wolves when I was BBC network football producer between 1975 and 1981 and working with Peter and Bryon Butler. Andy Gray was doing well at the time – he was fantastic to work with as well.

“I have seen loads of Leeds over the decades, as they are the biggest club near to where I am from, and John Charles is probably the best player I have ever seen – better than Messi and Maradona. I know he didn’t play in the glory years at Elland Road but he was a real colossus.”

Such longevity on the gantry and in the commentary box inevitably means the 74-year-old has seen Wolves at a low ebb as well as in their pomp under Stan Cullis and during their years of high prominence under Bill McGarry. 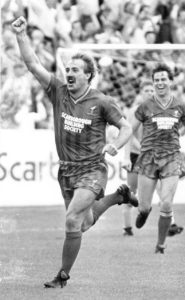 Historic day……Phil Robinson looks on after a Scarborough goal in the draw with Wolves on 1987-88’s first afternoon.

Scarborough away on the first day of the 1987-88 was nothing like as depressing as it got but was an iconic day in the Fourth Division stay of a club Helm recalls as one of the world’s finest three decades earlier.

“We arrived there two hours before kick-off and the woman running the official car park had to rush off to the club shop on some urgent business,” he recalls. “The referee had just arrived and we had to turn a few vehicles away after she asked he and I to man the car park for a while!

“I saw Wolves lose at Halifax in February of the same season and was there when Robbie Dennison scored probably the goal of the weekend in the Football League centenary tournament a few weeks after that.

“I enjoyed the Bull-Mutch-Thompson era greatly and saw a few of the Black Country derbies as I had some work with Central.

“At a Wolves win at home to Sunderland in 1996, I commentated off a monitor they rigged up in the laundry room because the leads outside weren’t long enough.

“There was also a match at Grimsby in the mid-1980s when I was commentating on the gantry and Dave Barnes almost put an own goal past Tim Flowers after four seconds.”

We are indeed fortunate that a man who has visited 87 countries in his chosen profession, including a host of World Cups and European Championships, has such specific memories of matters gold and black. So, a few more random ones to finish with? 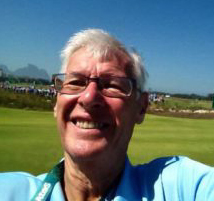 John Helm……unusually, with not a football stadium in sight.

“I recall dashing back from the World Cup preliminary draw in Argentina in 1977-78 to watch Wolves play at Arsenal and have become close to some of their players and coaching staff,” he added.

“Steve Kindon became a good friend and I have done a lot of dinners with him as well as seeing he and Kenny Hibbitt on the golf course. And I have known Terry Connor since he started up here with Leeds.”