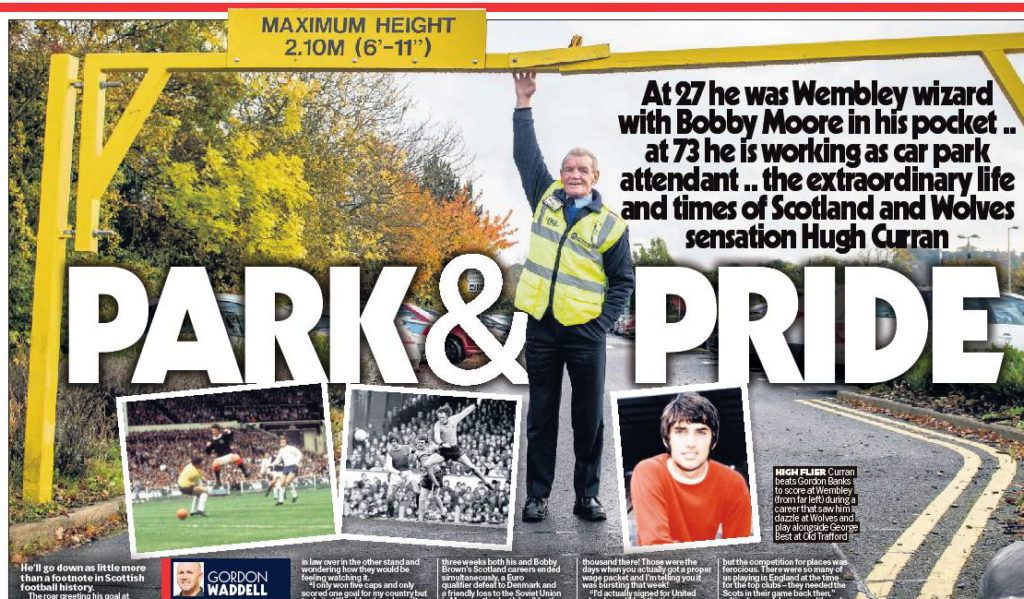 How Hugh was featured in print last weekend…..the small colour action photo shows his Wembley goal the small matter of 45 years ago.

We at Wolves Heroes remain flattered by the number of former Molineux favourites who continue to seek us out – and by the connections we are asked to make with them.

Late last week, the face-to-face interviews we have conducted with Hugh Curran in his adopted home city of Oxford came to the attention of the Glasgow-based Sunday Mail, whose correspondent Gordon Waddell then contacted us in urgent pursuit of the striker’s exact whereabouts as they planned their previews of tomorrow’s England v Scotland World Cup qualifier.

The upshot was a handsome spread in their editions a couple of days later – complete with a new photo taken at the Park and Ride base at which he still works at the age of 73.

Curran won the third of his five Scottish caps (all of them gained while he was with Wolves) when lining up in the Home Championship clash of the two countries at Wembley in May, 1971.

And, with another game at the venue looming, it was that fixture that our friends north of the border concentrated on when they succeeded in getting through to him.

“I only scored one goal for my country but to do it at Wembley, four days after I’d played my only game at Hampden for Scotland….it’s the stuff you dream about as a kid,” he told the Sunday Mail.

“Martin Peters scored early but I got the equaliser less than two minutes later. I read a back pass from Alan Ball and saw Banksy coming out. Although it was coming to my right foot – which I didn’t score that many with – I’d never have given up on a 50-50 with him.

“I went through him and managed to get my right boot to it. I remember it hitting the back of the net and I was thinking about my dad in the main stand and my father-in-law over in the other stand, wondering how they’d be feeling watching it.”

Curran’s pride and Scottish joy were relatively short-lived. In the article, he continued: “Martin Chivers brought us back to earth. He was a real nemesis for me – he scored two at Wembley and then two for Spurs against Wolves a year later in the final of the UEFA Cup.

“The biggest frustration for me that day was that I got hurt in a tackle in the first half and did my knee. It was painful and despite wanting to, I couldn’t go back out for the second half.

“I never got the chance to help the team recover and I was sick about that because I had the beating of Bobby Moore and Roy McFarland.

“I could outjump them and all I wanted was for Jimmy Johnstone just to give me a couple of those great balls of his into the box and I would have dealt with it.”

Thankfully, You Tube has footage of the clash which came three weeks after Curran signed off a successful club season in which his 20 goals helped Wolves into Europe via a fourth-place finish in the top flight and to glory in the Texaco Cup.

A Scotland side captained at Wembley by former Molineux youngster Bobby Moncur were behind again when Chivers scored before the half-hour and the same man effectively put the contest to bed late in the first half, England finishing top of the championship and their visitors bottom. 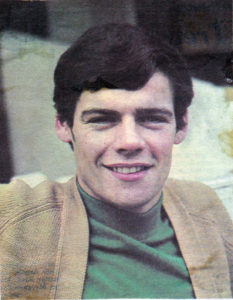 Frank Munro…..another proud Scot on the Molineux staff four and a half decades ago.

Frank Munro, wearing no 15, was the man to go on for Curran, who then won his remaining two caps in the follow-up games away to Denmark and USSR.

With the dying embers of Bobby Brown’s reign as manager, the prolific forward also reached the end of the international road.

But he reflected to the Sunday Mail: “The Wembley weekends were a rite of passage for Scots, weren’t they? And I still get stick at work. I’m pretty vocal in my support of Scotland and hate it when we lose.”