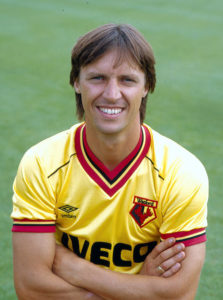 Martin Patching in his Watford years.

Martin Patching has provided an interesting past-and-present slant on Kenny Jackett while also revealing the extraordinary story behind his own contribution to Watford’s FA Cup fifth-round romp at Molineux three and a half decades ago.

The former England schoolboy forward played in the Hornets’ 3-0 victory against a club he had left only a few weeks earlier – and more than doubled his win bonus in the process.

But he disclosed to us this afternoon that his influence on the dismantling of John Barnwell’s team was not just confined to events on the pitch.

“I still had my house in Penn and Graham Taylor had kindly given me a couple of days off to spend back in Wolverhampton,” he said. “That gave me the chance to go to the second leg of Wolves’ League Cup semi-final at home to Swindon on the Tuesday night.

“We actually had a few days at Lilleshall preparing for the tie at Molineux and, after training on the Friday, Graham asked me to run through a few strengths and weaknesses Wolves had.

“It was a bit daunting but I did my best and then asked him if I could be captain for the day, which was quite a common practice then for players going back to their old clubs.

“He said ‘no’ but told me I could lead the team out and I advised our skipper, Ian Bolton, to turn the teams round if he won the toss and have Wolves attacking the North Bank end in the first half. I knew from being there that they much preferred kicking that way in the second half.

“Everything worked a treat and we won 3-0, although sadly John McAlle, who had been sent on as a substitute to rough me up, broke his leg when he collided with Steve Sims.

“What was even better for me was that I had shared a room with Luther Blissett and seen in the papers that we were 8/1 to win. I rang a bookies on the Penn Road and we put a tenner on – footballers were allowed to bet then. 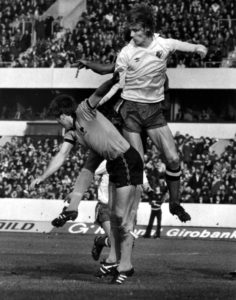 “We won £40 each. That was £10 more than our win bonus. It was very decent money! The reason I fancied us so much was that I suspected the Wolves lads would have been celebrating after beating Swindon to reach Wembley in the League Cup and might have taken us a bit lightly.

“I know they sound crazy odds in an FA Cup tie but we were struggling in the Second Division then and Wolves were very much top flight. We also had an awful away record and didn’t win on our travels until we beat Preston on my debut a few days before Christmas.”

Watford, with Jackett among a talented crop of youngsters also including Nigel Callaghan and Steve Terry, were beaten 2-1 by Arsenal in the quarter-final at Vicarage Road while their fifth-round victims recovered to beat Nottingham Forest at Wembley.

And Patching returned to the Hornets to scout for them around the time they made it to the Premier League in 1999 with Jackett and Taylor in their management team.

“Perhaps they were impressed with my scouting report from the Swindon game all those years ago,” he added. “I mainly went to watch future Watford’s forthcoming opponents but also remember being sent four times to watch Bury, who were then in the Championship, because we were interested in their two centre-halves, Chris Lucketti and Paul Butler.

“Kenny put me on the spot after one night match by asking me which I thought was the better bet and I said Butler as I thought Lucketti was maybe playing as high up the League as he could.

“We didn’t sign either in the end but Wolves took Butler a few years later from Sunderland, of course, and made him captain.

“Graham Taylor was very thorough in his scouting and said he signed me only after watching me three times as well as sending different scouts twice each.

“The gaffer even stood on the South Bank terraces when I played in the win over Burnley early in Wolves’ run to the League Cup final in 1979-80. He apparently asked two or three fans around him what they thought of me, so they must have given him some encouraging feedback!”

Fast-forwarding to the present day, the Rotherham-born 58-year-old remains a regular watcher of Championship football in his home town and was at Wolves’ 2-2 draw at the New York Stadium on the opening day of the season. 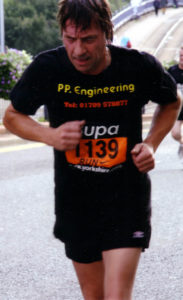 Patching putting in the hard yards in recent years.

He sits alongside his brother, a season ticket holder, just above the players’ tunnel and fears a return to League One in the coming months.

Jackett recently bailed out of the Millers’ manager’s post after only five matches but Patching insisted: “He is a very decent man and no-one up here blames him. This is a difficult job and he probably thought he was going to be dragged down by it.”