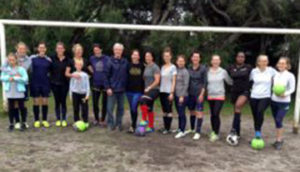 John Richards in his unfamiliar role.

John Richards has belatedly placed a foot on the path well trodden by so many of his contemporaries with a small step in the coaching world.

It won’t make the headlines anywhere else and forget the notion that it represents a career change – this was recreation only and it was a long, long way from home.

Richards was roped in for touchline duty on the recent visit he and wife Pam made to their eldest daughter Kim in Australia, although you could be excused for thinking the photo on the right may equally have been taken on an English morning.

Donning a tracksuit and directing operations from the sidelines has never really been for him but he said: “I was asked to pop along to take a Sunday morning session and happily agreed.

“A group of Kim’s friends were at a party when they decided to form a football team. They are all professional women in their 40s, so it’s only for fun really.

“They call themselves Hampton Hurricanes – Hampton is the suburb of Melbourne where they are based – and they play in a seven-a-side league over there.

“I just concentrated on basic skills…..passing, control and some shooting. I don’t have any coaching badges and haven’t worked in that area before but am up to date with a few modern training techniques from watching our grandson Oscar’s sessions with his team, Bingley Juniors.

“It was good fun and a total one-off to have 14 women doing what I told them…….that isn’t going to happen again!”

Jim McCalliog….managed Halifax near the end of their Football League days.

Despite the generalisation at the top of this story, surprisingly few of Richards’ Wolves team-mates made it into League management following their playing days.

Exceptions that quickly come to mind are Mike Bailey, Les Wilson, Bobby Gould and, a little lower down the scale, Kenny Hibbitt, Emlyn Hughes and Jim McCalliog. But that is a small proportion from approaching 100 Wolves team-mates.