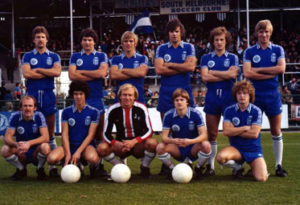 Alun Evans and Frank Munro (both middle of back row) and Bertie Lutton (far right, same row) in Melbourne, the city where they were reunited with Dave Maclaren.

From Plymouth and Southampton to Vancouver and as far afield as Victoria, we have continued to learn much more about Dave Maclaren – the former Wolves keeper and coach who recently died in Australia.

The Wolverhampton-based son of Bertie Lutton kindly contacted us to make sure we had heard the sad news and was disappointed to learn that the funeral was taking place two days ago at Mount Alexander Chapel in Castlemaine.

“Dad would have liked to attend but lives in a different part of the state – nearly three hours away,” Lee told us.

“I knew Dave very well. His wife Isobel and my mum always went shopping and I was a tag-along. There were barbecues after games as well at the two clubs in Sydney and Melbourne where Dave was manager to Dad for three years.

“I have not seen him since he retired in his late 60s and decided on the quiet of rural Victoria but our family have some very fond memories of him.”

Maclaren might have made his life and living abroad even before settling Down Under in 1972 – the year he also oversaw Malaysia’s progress to the Munich Olympics as their head football coach.

When joining Southampton in 1966-67, he told manager Ted Bates he could only be a stop-gap at The Dell as he intended to take up an offer to coach in Africa. His plans changed, though, when daughter Alison was born, so he subsequently joined Worcester instead, having already coached at Worcester College and become familiar with the area from his 47-game playing career at Molineux.

The talented Scot, who passed away at the age of 82, caught the Saints’ eye when, as Plymouth’s keeper, he saved a penalty from Terry Paine on Boxing Day, 1963.

He had previously starred in helping Argyle reach the League Cup semi-finals in 1964-65, where he was blessed with the dream draw – a two-legged tie against his first English club, Leicester. But he was sold before the games came around, having been unable to resist Wolves’ approaches to assist them in their unsuccessful attempts at First Division survival.

And it was at Molineux, where he returned to coach under Ronnie Allen and then Bill McGarry, that we turn for the last and best of our anecdotes of a man who was also a pianist, a fine golfer, cricketer and ten-pin bowler and a record-breaking Combined Services pole vaulter in post-war Hong Kong.

Les Wilson was a club colleague of Maclaren’s for several years and told us: “Dave was a wonderful friend and I am so pleased I made the effort to go and see him in Australia once when I was over there on Canadian duty.

“I still laugh when I recall from our playing times together how he took a cigarette lighter to the team sheet one day and burned it after he saw he was in the reserves rather than the first XI!”