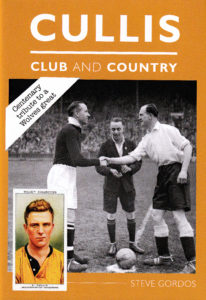 A perfect idea for Christmas….

“In this world, you only have one life and I gave mine to Wolves.” So said Stan Cullis – and the new publication chronicling his fabulous career at Molineux and at international level outlines exactly why the bond was so powerful.

There have been previous worthy books by and about the club’s greatest ever manager and this one from the highly respected Steve Gordos provides more answers as to what made him such a success.

The author began his Wolves love affair the small matter of 62 seasons ago in the year they were winning the League Championship for the first time.

He also had family connections with the Iron Manager through his father and was the ideal person to carry off this assignment; one made possible by his friends at Geoffrey Publications – producers of several Wolves books in the past.

Gordos details how the honours which narrowly eluded Cullis as a player before and just after the war came to him in abundance on the other side of the white line after it.

Having skippered sides who finished League runners-up in 1937-38 and 1938-39 and also came a surprise cropper against Portsmouth in the FA Cup final in the latter year, the outstanding centre-half was consigned to ending his playing days without silverware.

He played on through the hostilities for club and country, also captaining the latter during the accumulating of his remarkable 20 wartime England appearances.

But, having been part of another title near-miss during his farewell season and then turned down an approach to manage Hull, he succeeded Ted Vizard in the top job at Molineux and famously oversaw the winning of the FA Cup in 1949 and the lifting of three League Championships over the next decade and a bit. 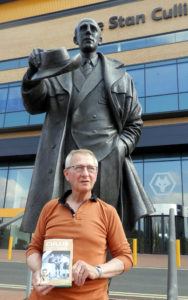 Author Steve Gordos – appropriately positioned outside Molineux and attired in a shirt given to his father by Stan Cullis.

A renowned visionary, he also made sure the club installed floodlights and then made them the scourge of Europe’s finest as they displayed their talents in the famous night-time friendlies.

Cullis: Club And Country is on sale in the club shop at Molineux and in the city centre. Readers are welcome to contact us if they need further details on this or any other book about the club.