A Call From The Doc

But Les Was Not For Moving 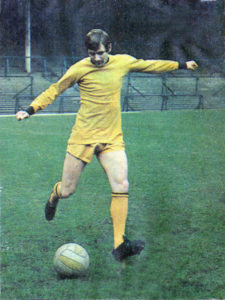 Les Wilson….might he have swapped gold for claret and blue?

Wolves v Villa is coming up in the first half of January – and that will rekindle thoughts for Les Wilson on how he might have made the switch across the West Midlands more than four and a half decades ago.

At the centre of his recollections will be the one and only sending-off of his professional career and the help he subsequently received from Tommy Docherty.

Wilson was dismissed when Villa visited Molineux for a reserve game in 1970 and the sense of injustice clearly stretched across the patch, although there may also have been some professional motivation behind The Doc’s intervention.

“I should not have been sent off,” Wilson says. “Bill McGarry protested and I had to go to an FA hearing in London.

“I was accompanied by Tommy Docherty, who was manager of Villa at the time and who was at the game. I was going to say I was given a red card but I don’t think they had them in those days.

“We travelled by train from New Street and Tommy, in all fairness, assisted me in my appeal and I was not suspended. During the journey, he told me about his life in football as a player and manager; his disputes and punch-ups, the odd court case and bitter rifts which he said would never heal.

“His story is an incredibly rumbustious one, painted in screaming banner headlines. He seemed to be in the papers every day, with some major event.”

As a Wolves player, Wilson never faced Villa in the League or domestic cups but played against them twice in 1969 when the clubs were competing in the America summer tournament won by McGarry’s men.

He lined up at right-back and marked the talented Willie Anderson both when Wolves beat them 2-1 in searing heat in Atlanta, Georgia, and ten days later in Kansas City when a brilliant performance brought them a crushing 5-0 win over a side then in Division Two.

“Derek Dougan was on Northern Ireland duty for the first part of this tournament, so I roomed with Peter Knowles,” Wilson added.

“When Derek joined us in Atlanta, we became room-mates for the rest of the trip and he nonchalantly said to me after the 5-0 win that Tommy had been impressed with me over the two games and would like to take me to Villa.

“He said The Doc fancied me big time and asked if I was interested. I said I wasn’t interested at all because I wanted to play for Wolves in the top league in the world, the English First Division. Villa were a division below us. And loyalty was very important to me in my career.”

Wilson was immensely proud at the club’s success across the Atlantic, given that he had been raised if not born in Vancouver.

“Those Wolves teams in 1967 and 1969 certainly knew how to win in North America,” he added. “No wonder Tommy Docherty came to my defence when I was sent off. Was there method in his madness? Let’s put it this way: we had a great chat about football on that train from New Street to London.”

The Docherty-Wilson story doesn’t end there. Partly because of the connection, the manager’s Manchester United team flew out to play Vancouver Whitecaps in May, 1976.

United had been high-fliers in that season’s top flight, although they were shocked by Second Division Southampton in the FA Cup final.

The incomparable Tommy Doc, with Jim Barron at Molineux.

“I went out to the airport to meet and greet Tommy and the United players and staff, including my old physio at the Wolves, Laurie Brown,” Wilson recalled.

“The Doc had travelled first class and, when he came off the plane, I could tell he had had a few! I travelled on the United bus and took them to the hotel in Vancouver.

“After the game at Empire Stadium, which we drew 0-0, one of the Whitecaps directors had a party for both teams at her luxurious home in West Vancouver. Obviously, I got talking to Tommy again during the buffet and cocktails.”