Back Where It All Began

Swapping Oz For Scotland – And Happy As Could Be! 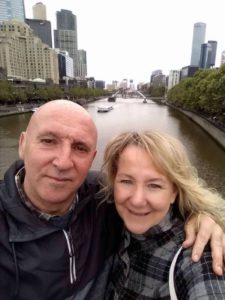 Conscious as we are not to cross the thin line separating healthy interest from stalking, we don’t intend to keep intruding into the lives of John Black and his lovely lady friend, Roberta.

But, after explaining on here last July how delighted we were to play a part in reuniting these one-time teenage sweethearts after some 40 years apart, we thought our readers might just enjoy this follow-up.

We reported then how they were back together for a while……sadly, they subsequently became oceans apart again for several months when Roberta had to return to her home in Australia.

But there have been developments since – pleasing ones for those who love a happy ending.

John told us: “We set up home together on December 28 here in Brora in the north of Scotland.

“I spent November in Melbourne, which was great, and we successfully prepared Roberta’s house for renting. Then we had the New Year in Clydebank, where we met and courted as teenagers.

“She is a grandmother and her son and daughter still live in Australia, so we aim to go back in a year or so for a holiday.”

Black, who spent several years around the fringes of Wolves’ first team while compiling six senior appearances in the late 1970s, had been Down Under before but not to Australia.

He served Christchurch United in the mid-1980s and added: “Just getting into New Zealand was terrible. It’s funny looking back now but it wasn’t at the time after I had been travelling for 24 hours.

“It had ‘professional footballer’ on my documentation but the customs officer told me there weren’t any professional footballers in New Zealand at the time and he had me emptying my suitcase and even tipping out a big holdall containing all the footwear I had packed for the various surfaces I would be playing on.

“I had also been given the title of junior director of coaching to go alongside my playing duties – and it was my work with kids, often in schools, that I was being paid for.”

John has been a firm supporter of this website from afar and from time to time regaled us with tales of his life after football. But he surpassed himself in his use of words when flatteringly calling us ‘matchmakers extraordinaire’ after he and Roberta re-established contact. 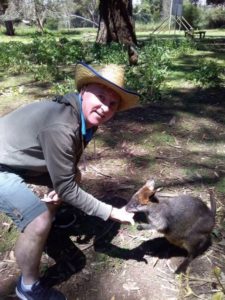 John getting friendly with the native wildlife.

It is only natural, with both parties divorced, that we wonder whether Wolves Heroes might in the future have its first wedding!

But the couple can rest assured that our New Year’s resolution is to let things be and not further intrude on their privacy.

“We’re just really happy for now and enjoying being together again,” John said. “We have lots of plans for the future, so you never know.”