A Victim Of Circumstance

Bridges Too Far Opened Up New Pathway For Tony 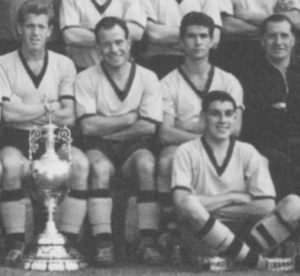 Ok, who knows or remembers Tony Bridges? You would need good powers of recollection or a programme collection dating back to Wolves’ glory years to do so. Charles Bamforth, as he is inclined to do, decided he wanted to trace this one-time Molineux youth and reserve hopeful and learn much more.

In these days of crazy transfer fees and salaries, it can seem unreal to look back to the 1950s when a club’s top players were rewarded with modest pay packets not much fatter than those picked up by the youngest of professionals.

Take a look back at the Wolverhampton Wanderers team group photos in the last years of that momentous Molineux decade and you will see huge professional squads.

There were players who, season after season, would ply their trade in the Birmingham League or Worcestershire Combination, enjoying a relatively comfortable lifestyle while naturally challenging to rise into the first or second teams. Competition was intense but opportunities did arise for those who dedicated themselves to the cause.

At the helm at Molineux, of course, was the legendary task master, Stanley Cullis, who expected the best and who, by nature, did not welcome challenges to his authority.

It is seldom discussed but, amid those glory days in Wolverhampton, with two League Championships won and then an FA Cup triumph in three seasons, there was a quickly-quelled players’ revolt, led by the brilliant Peter Broadbent, with the aim of securing a better wage agreement.

This, of course, pre-dated the high-profile Jimmy Hill-led challenge to the wage limit that allowed for new deals like the famous £100-a-week for Johnny Haynes at Fulham.

But the agitation was afoot before that sea change in 1961, this increased pursuit of better pay appearing to focus the attention of the powers-that-be on the size of squads.

If some players insisted on ‘fancy’ deals, there would have to be fewer on the payroll. Cullis said in his book, All for the Wolves: “The problem of wages is fundamentally the most difficult of the many issues which a manager handles. It is no solution at all to offer every player the maximum of £20 a week permitted by Football League regulations. The size of each individual’s wage packet must be delicately calculated in order to provide a reward for past services and an inducement to further effort in the future.”

The challenge to this rigid stance against exceeding pay norms was not helpful for the careers of younger professionals, such as Tony Bridges.

“I wasn’t one of the players in revolt but when Mr Cullis pruned the full-time playing staff, I was one of the ones let go,” he now says.

“I became so disillusioned and heartbroken that I left the game. The silver lining is that I have two successful businesses and I am still working today at the age of 74 – not because I need to but because I enjoy it.”

All this is a long way from Tony’s first professional contract at Wolves, which brought him £10 per week in the season and £8 per week in summer.

Apart from his relatively brief sojourn in the West Midlands, he has resided in Lincolnshire, having been born in Grimsby.

“My father was the youngest skipper ever to sail out of Grimsby and was awarded the MBE for services to the fishing industry,” he added. “I was born in November, 1941 and attended St James Choir School in Grimsby, where I became head boy.

“I played for Lincolnshire against Nottinghamshire at Retford in 1957 and George Noakes, the chief scout for Wolves, was at the game. He recommended me to Stan Cullis. 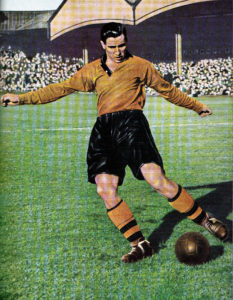 Bill Shorthouse, celebrated here in a drawing and a positive influence on the career of a young Tony Bridges.

“I joined the groundstaff, lodging with Mrs Reynolds in Molineux Street, and signed professional on my 17th birthday. My best friend was Dave Oliphant from Carlisle, who has sadly passed on.

“I respected the coaching staff greatly. Jack Dowen was a kind man, although very resolute. Joe Gardiner and Bill Shorthouse were also extremely supportive and I remember the physiotherapist George Palmer attending to me. There was also Jack Davies, who was Welsh. We lads used to imitate him, though not to his face!”

Bridges featured strongly at centre-forward in the FA Youth Cup side the season after Wolves had lifted the trophy in 1958. Team-mates included Terry Wharton and Alan Hinton.

“I recall scoring two goals on my debut in that youth team against West Brom,” he said. “There is a photo of me in one of the local papers, scoring the first with the clock on the old Molineux Street stand showing a minute past three.

“We then met Manchester United and lost 2-0 in front of a crowd of more than 22,000, nearly as many as the present Wolves first team get. In the United team was Johnny Giles.

“The highest level I reached was when I was taken as reserve for a first-team game at Burnley. I nearly played as Norman Deeley wasn’t well but he recovered by the time we got there. We had stopped off for lunch in Manchester…..maybe he needed some sustenance!”

Despite this clear recognition of Tony Bridges’ promise, the pruning at Molineux made him a victim in 1960.

“Bill Shorthouse told me I was not being retained just before the Cup Final and that was that,” he added. “I joined a marketing company and stayed with them until I opened my first business in 1971.

“This was very successful and I sold it in 1979 to start another business which was even more successful. My late wife and I owned Free Houses and Restaurants.

“My two companies now are engaged in video production and sports marketing. One is MMTV & Video UK, whose customers have included the English Golf Union, Tesco, Monarch UK and the Football Association.” 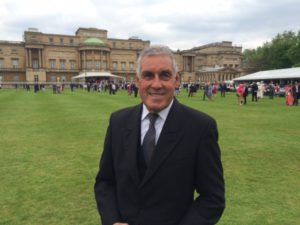 Tony in recent years at a Buckingham Palace garden party.

Bridges has also been prominent in local government and, up near the Lincs coast, was elected to East Lindsey District Council as ward member for Tetney & North Cotes in 2007.

“My children grew up and were schooled in East Lindsey and this is why I am committed to this area,” he added. “Family is very important to me. I have two children and three grandchildren and although they live in Cambridgeshire, I go ice skating with them to Peterborough Ice Rink whenever possible. And I try to keep fit by walking and cycling.”

Being let go by Wolves was clearly not the end of the world.