Where Finance And Friendship Met…..For The Greater Good

It’s easy to see why Rachael Heyhoe Flint hit it off in such a spectacular way with Sir Jack Hayward.

Like him, she came from Wolverhampton – one of the nicer parts of town, it must be said – and exported excellence and charm across the globe, armed with a spirit of enterprise, adventure and fun. 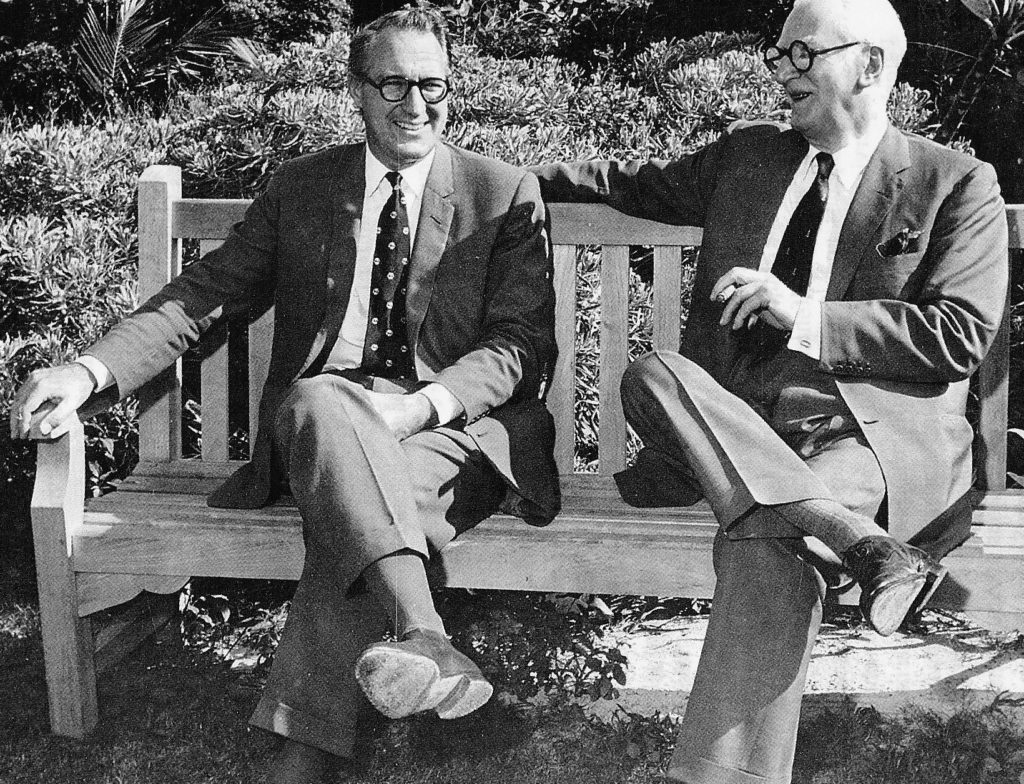 Jack Hayward and his father Charles, in the days when the latter was the only Sir of the two.

In his case, it was in the business and philanthropic sector. In hers, it was sport, primarily cricket, although her love of politics brought her a Baroness title to go with her OBE from 2008. But thank goodness their worlds overlapped when they did more than 45 years ago.

As plain Rachael Heyhoe, she was working as sports editor of the Wolverhampton Chronicle when a friend in the newspaper’s library suggested a begging letter to Charles Hayward as an extension to her feverish money-raising attempts, as skipper, to facilitate an England tour to Jamaica.

Our Women’s Cricket Association had already turned down the invitation on the grounds that it was too costly so close to a 1968-69 trip to Australia and New Zealand. Thankfully, not everyone gave up on the idea…..

Backing such a venture was not the London-based millionaire’s thing but he referred the matter to his son, who subsequently requested that a full proposed itinerary be posted to him in the Bahamas.

It was on a cold November night that Rachael answered the phone to be greeted by Hayward Junior ‘joking, chatting and enquiring about the Wolves and the weather.’

He didn’t baulk at the £1,580 quoted to back the tour and immediately said yes. “I felt like Cinderella when the Fairy Godmother told her she would go to the ball,” Rachael wrote in her 1978 autobiography, Heyhoe. “He had apparently been following the progress of the England team for some time and had been proud of our efforts on the Australian tour, both in raising the cash and creating a good impression out there. This, he said, was his token of appreciation. He paid for our tour out of the kindness of his heart.”

The still-unknighted Jack was in London shortly afterwards and the two met at his regency-style office in St James’s for a lunch topped off with a bottle of Double Diamond apiece.

He handed over payment on one condition – knowing that the large payment he was making to a lady called Rachael would show on his cheque stub, he insisted with ‘a wicked grin,’ that the recipient rang his wife Jean there and then to explain that there was nothing untoward about his motives.

To underline the point, Hayward turned up to watch the latter stages of the six-match, 22-day trip in the company of his 19-year-old daughter Susan, the captain’s winter of travelling having started unhappily when she departed for a six-week coaching stint in Australia and was nearly turned back at the departure gate as her passport had expired.

All this was only the start of the story. At the farewell supper thrown by the hosts in Jamaica, the businessman ‘bit’ on a suggestion that the tour might be repeated – but went a step further by instigating the Hayward Trophy, which was to be contested in the Caribbean early in 1971 by England, Jamaica and Trinidad, with a playing stop-off in the Bahamas en route.

Heyhoe had by then been touched by a further act of generosity from the benefactor who, when told that Anne Saunders had narrowly and unluckily missed out on selection, paid for her to go along in the contrived position of assistant manager. “It was just one more example of the extraordinary generosity of the man,” she added.

The skipper took the opportunity of meeting Pele in Kingston but was less enamoured by the conduct of the Chelsea players who were also playing in the region.

Much more to her liking was the continued interest in her no 1 sport of her by now firm friend, who used her dinner visit to the Haywards’ Sussex home during a cricket weekend at Eastbourne to take things a dramatic stage further.

“With my brandy glass in hand, I sat and talked with Jack and Jean into the wee small hours as he tried to dream up some new method of helping the women’s game,” Heyhoe wrote.

“The idea came quite naturally……’Why couldn’t we bring every national team to England for a World Cup?’ (he asked). 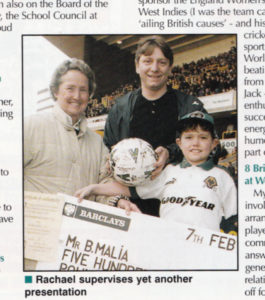 Rachael Heyhoe in the role we all became used to seeing her operate in at Molineux…..this feature about her being presented in the club’s programme in 1998.

“He finally paid £10,000 more than his original estimate (£30,000) but didn’t appear to begrudge a penny of it. Someone once asked him, a little scathingly, why he ploughed so much of his money into women’s cricket. ‘It’s quite simple,’ he replied. ‘I love women and I love cricket – what could be better than to have the two rolled together?'”

This was one happy, successful partnership; the catalyst for England to become the competition’s first winners, enduring enough for Heyhoe to be welcomed as a director in a Hayward reshuffle of the Molineux boardroom chairs more than a quarter of a century later. And for the two of them to remain as friends right to the end.

We will be writing much more about her and her local sporting connections shortly in the light of her desperately sad passing-away this week.