Welcome – You Can Use Our Room

A ‘Borrow’ From Barrow!

A photo from the North West Evening Mail’s coverage of Wolves’ game at Barrow.

Wolves fans are busy debating whether Liverpool’s recent slump in form helps or hinders their side’s chances of pulling off an FA Cup upset on Saturday.

What is beyond argument, though, is that even the Anfield crowd’s long-time reputation for fair play is likely to fall short of the reception Wolves were given on another northern assignment in the competition nearly 60 years ago.

As regards the favourites-underdogs balance, the boot was very much on the other foot when they were despatched to faraway Barrow in a third-round tie in January, 1959 – a time, of course, when they were defending League champions.

And there were ultimately no surprises on the field thanks to a 4-2 victory at a ground they had been to only once before. That was for a Third Division North fixture in 1923-24. They have not been back since.

Wolves would surely not have anticipated the gesture made to them on arrival at Holker Street, though, after three days of preparation at nearby Grange.

“Their dressing-room accommodation isn’t exactly the last word but these gentlemen of the Fourth Division proved the perfect hosts.

“They let Wolves have the home dressing quarters and that was a gesture, indeed.”

Maybe the act of charity extended towards Stan Cullis’ team was born out of embarrassment at the conditions they were being asked to play in.

Three inches of snow had fallen in Cumbria during the week and the locals were commandeered into helping with the shifting operation by being asked to take their own shovels and spades.

Even then, Kevin Rowley, the Middlesbrough official who was to referee Wolves’ Wembley victory over Blackburn in 1960, needed a pick-axe to deal with some remaining ice during his inspection on match-day morning after 50 braziers had done their work overnight.

On a treacherous wintry surface, the challenge was very real for Wolves in the biggest Cup game ever staged at the venue despite Barrow manager Bill Brown having feared that the visitors would score ‘a lot of goals.’

In front of a crowd of more than 16,000, they were held 1-1 at half-time and 2-2 with little more than 15 minutes to go. But they subsequently pulled clear to win 4-2, with Norman Deeley (2), Colin Booth and Micky Lill scoring. 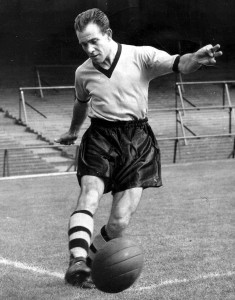 Alas, the visitors, who will not be expecting the welcome mat to be laid out to such an extent at Anfield this weekend, failed to build on the success during a season in which they retained their First Division title.

They were drawn in the next round at home to Bolton, who beat them 2-1 on another Arctic afternoon, this time marked by a white-over Molineux pitch.

There was also a meeting of the two Wanderers in the competition 12 months earlier, with Bolton winning by the same scoreline at Burnden Park.