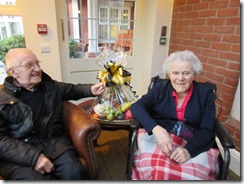 Tuesday, January 3: We are grateful to Glyne Wetton for informing us that Jimmy Mullen’s widow Joan is still going strong in her mid-90s, virtually 30 years on from when Jimmy became the first member of Wolves’ 1949 FA Cup final team to pass away. It was as recently as the autumn that we lost the last survivor from that victorious line-up, Sammy Smyth. Now we learn that Glyne pays Joan regular visits at the nursing home at which she lives on the edge of Wolverhampton and, with Graham Hughes from Molineux, recently took her a Christmas fruit hamper and signed card from the staff and players at the club.

Thursday, January 5: Interesting to see that Sian Massey-Ellis, the assistant referee at the centre of a sexism storm six years ago this month, was awarded the MBE in the New Year Honours list. It was at a Wolves v Liverpool game on January 22, 2011, that the official was the subject of controversial remarks that cost Andy Gray and Richard Keys their jobs at Sky Sports.

Thursday, January 12: Can’t believe I was doing some research on the mid-1990s Wolves in the archive library at the old Molineux Hotel when the appalling text message about Graham Taylor’s passing-away came through early this afternoon. Such sad, sad news. Glad I am able to go to the home game against Villa on Saturday to witness what is sure to be an emotional celebration of his life.

Friday, January 20: What an awful month this is turning out to be. Now we are preparing to say goodbye to popular Wolverhampton girl Rachael Heyhoe Flint, whose presence at Molineux has been a regular thing for many, many seasons. Mike Stowell and Bobby Gould, the latter from a holiday in New Zealand, have already been on either to express their sadness or to ask to be kept in touch with funeral arrangements.

Sunday, January 22: Matt Forman is clearly keen not to slip out of contact again after being reconnected in recent months with many of his old Wolves team-mates. The 1980s midfielder loved the get-together in November to celebrate the 30th anniversary of Steve Bull’s signing at Molineux and is now planning to make another visit to the city, this time to take in a game.

Saturday, January 28: What a day, what more can I add! Only, perhaps, that when I picked Phil Parkes up at 7am this morning ready for our trip to Liverpool on a supporters’ coach, he let it be known that he hadn’t been to Anfield since last playing there (in Wolves’ 2-0 First Division defeat on August 27, 1974). He had clearer memories of the Merseyside visit in November, 1969, though, when unseasonal snowfall meant the bus from West Bromwich was delayed and he was half an hour late reporting for the coach. Bill McGarry fined him a week’s wages but was much happier when he approached him in the Anfield dressing room after his heroic role in a goalless draw. This time, acknowledging his man-of-the-match contribution but not wanting to lose face with the other players, he said quietly: “Forget the fine, big man.”

Wednesday, February 1: Such a sad and moving day, with Graham Taylor’s funeral in Watford. What a tremendous turn-out! Nice to hear that Steve Harrison, Bobby Downes, John Ward and Stuart Gray were there out of the members of the Wolves backroom team who were there while or soon after he was at Molineux. Attending on behalf of the present-day club were Laurie Dalrymple, Rob Edwards and Tony Daley. Andy Thompson has recently been telling us the story of how Graham, having invited him to Vicarage Road for talks after his free transfer from Wolves in 1997, couldn’t help but laugh when the Thompsons’ young son looked round the ground and announced loudly: “I don’t want to move here.” Tranmere duly won the race for the popular full-back’s signature!

Saturday, February 4: A final word on Graham….a round of applause broke out at Burton Town Hall last night when guest speaker and ardent Wolves Heroes supporter Charles Bamforth recounted a tale of how the manager once turned up at the Bass Charity Vase tournament at the old Eton Park ground and insisted on queueing with the fans and paying to get in. Charles, over from his home and workplace in California for the speaking assignment and a brewing-industry meeting in London, took in the disappointing game at the Pirelli Stadium this afternoon – the first time he had seen Wolves play in around 15 years. The highlight of his day was bumping into Peter Knowles in the ground, the 1960s star having been largely absent from the match-day picture for much, much longer.