A Stretch For Dales

Star Speaker Opens Up About Time ‘Inside’ 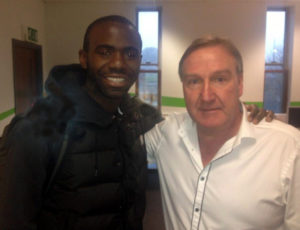 Steve Daley with Fabrice Muamba when he went to address a footballers’ class at Staffordshire University a couple of years ago.

As a former salesman in the brewery trade, Steve Daley is used to spending time behind bars. Not the sort that he has seen more of in recent months, though.

Already, this Second Division title winner from 40 years ago has visited several institutions in the West Midlands and is receiving requests to talk to offenders elsewhere in the country.

“It was a bit nerve-wracking when I first went to Winson Green because the security is incredible and it’s like a scene from Porridge,” Daley said.

“You don’t quite know what to expect when you walk into that environment but you soon realise that you are facing a group of guys who have made wrong decisions and you say what you think you can to help them make the right ones in future and turn their lives around.

“I know I was very lucky to have a good football career, especially at Wolves for many years, but I had problems after my move to Manchester City with people calling me a misfit and I felt at times that there was no-one to share my troubles with.

“I have always had a real determination to succeed, though, and stress when I do this kind of speaking now how much I have always set about turning a negative into a positive.

“I went on all the training courses when I was working at Carlsberg Tetley and managed to win the Salesman of the Year award in my second year. Then I was voted Soccer Speaker of the Year for three years in a row.

“I set goals and targets and, at the age of 63, I have never been as busy as I now am. I am also very competitive and hate even losing at golf to my son.

“I think the prisoners like the banter, especially if they support rival clubs to the ones I played for. Some ask for autographs and one of them came up to me after I spoke and said: ‘Thanks, mate, that was really inspirational.'”

On top of the visit to Winson Green in Birmingham, Daley has also addressed inmates at Featherstone and the nearby Brinsford young offenders institution, as well as those at a jail in Redditch.

He also has a trip to an establishment at Hull on his horizon and added: “There are usually between 60 and 75 prisoners and warders in the audience.

“Naturally, I was a bit nervous the first time to be stepping into a environment that was completely new to me but all the audiences have been brilliant and very attentive.

“The motivational speaking is becoming busier and busier for me – I was invited last month to go to the school that Connor Ronan of Wolves used to attend. 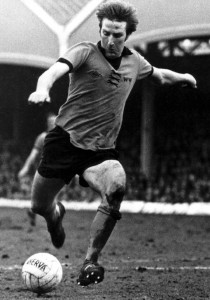 Showing the hunger that made him a Second Division title winner with Wolves.

“I have been busy on the speaking side now for 19 years but am moving away from only doing stand-up stuff at dinners.”

Daley, who had a chat to Burton manager Nigel Clough when bumping into him after Wolves’ defeat there on Saturday, has also recently moved home, although only a few doors down the same road in Codsall in which the family have lived since 1983.

He was one of five members of Sammy Chung’s squad to hit a double-figure goal tally when the club pipped Chelsea to the Second Division crown in 1976-77.