Farewell To Lady Who Stole Our Hearts 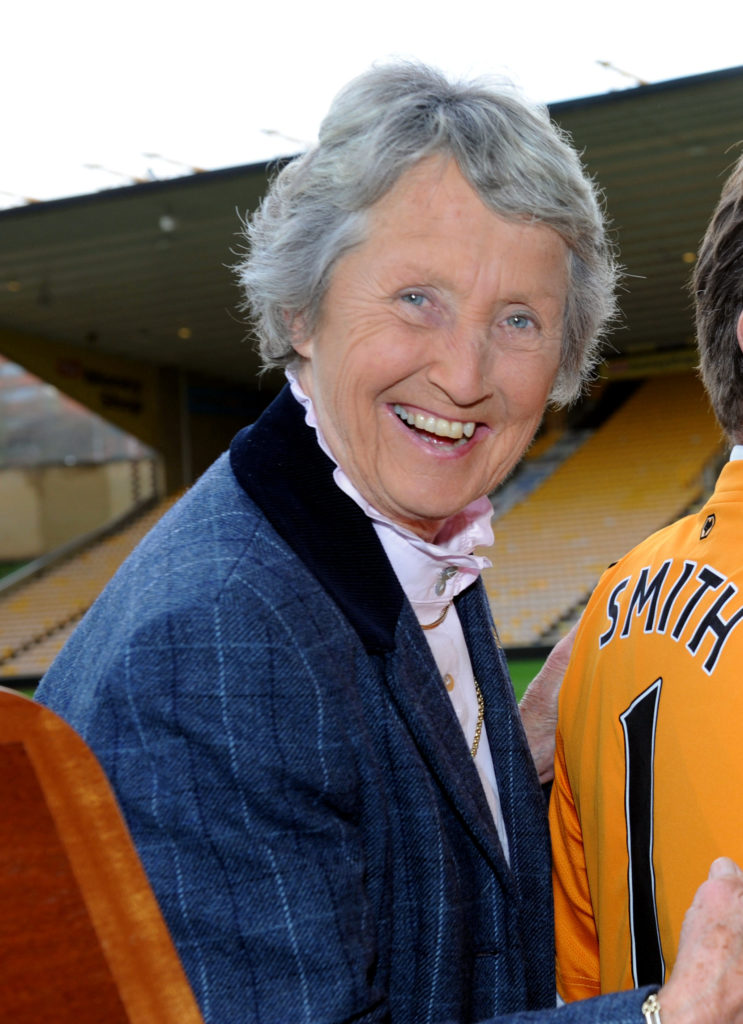 The Baroness Rachael Heyhoe Flint – and her characteristic smile.

It was between the fourth and fifth-round weekends of the 2014-15 FA Cup that Rachael Heyhoe Flint spoke with such feeling and humour at the funeral of Sir Jack Hayward – a man she revered so much, she thought he would live forever.

Those who knew Rachael probably assumed she was blessed with the same ‘immortality’ gene as her dearest friend. She was always on the go, getting things done for the common good, fussing around to make sure people were okay; a little bundle of constructive energy.

In the same magnificent church in Wolverhampton’s city centre yesterday, we received the sad reminder that time does, indeed, wait for no man or woman.

It is widely recognised that Rachael departed much too early. The Reverend Prebendary David Wright used cricket parlance in referring to her being ‘a little cross that her innings was coming to an end and she had to leave the crease.’ But, having pointed out that she was a proud church woman, he also said she was ‘at peace and ready to meet her maker.’

“I visited her at New Cross and, after a cheery greeting, she asked two questions and made one request,” he recounted. “She said: ‘How is the foot?’ and ‘How is the organ appeal going?’ She also told me she would like her funeral to be like Sir Jack’s but not as grand – because she didn’t think she was as grand. In that brief indication, there was a selflessness and humility.”

Wolverhampton certainly turned out in force to pay its respects. Correction: the sporting, charity and even political world were present in numbers to bid her a fond farewell. The turn-out at St Peter’s was far-reaching and varied as well as full to capacity. 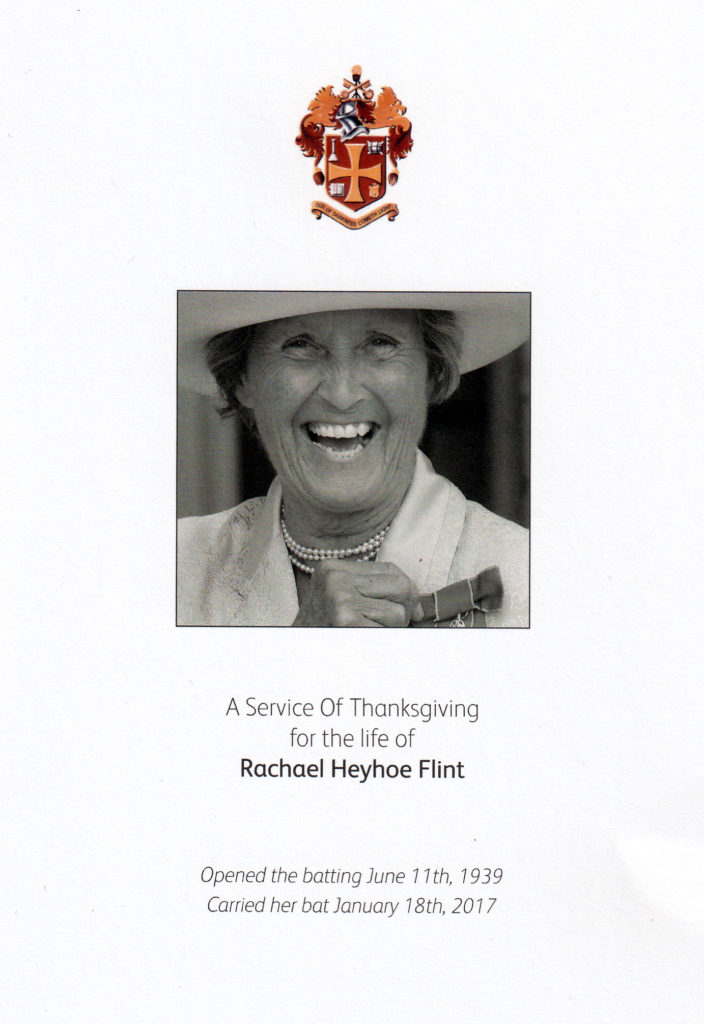 The ‘batting order’ on a day of tributes to the lady some in cricket and hockey circles referred to as Flinters.

They were saying goodbye to a remarkable woman; one, of course, they knew best for her work at Wolves and for any number of worthy local causes, including her passionate presidency of the aforementioned organ restoration appeal. But, boy, did she cram a lot else into her 77 years!

She was awarded the MBE and in 2008 the OBE, although those honours were modestly omitted after her name on the order of service, and made some high-profile appearances – on A Question of Sport, Whicker’s World, Desert Island Discs, Pete Murray’s Open House and the popular former radio quiz show, The Petticoat Line. She was also the first female reporter on ITV’s World of Sport, commentated on hockey internationals, was an award-winning speaker and wrote for the Daily Telegraph, Express & Star, Wolverhampton Chronicle and others. In latter years came the House of Lords and that Baroness title.

Flicking through the picture pages of a book reveals much about its contents and the photographs in Rachael’s 1978 autobiography include ones of her alongside Richie Benaud, Garfield Sobers, MJK Smith, Joyce Grenfell, Jackie Stewart, Princess Anne, Peter Oosterhuis, David Hemery, Denis Compton, Edward Heath, Graham Hill, Colin Cowdrey, Freddie Titmus, Henry Cooper, Sir Jack and TV’s Brian Moore. That’s some roll-call. And the foreword was written by Eric Morecambe, who included the line: “She’s in such demand as a speaker that she rarely eats at home.” Among other greats she met are Pele and Muhammad Ali.

We wrote last month soon after her sad passing of many of her cricket exploits and she toured or played matches in South Africa, Australia, New Zealand, the Caribbean, America, Canada, the Bahamas and Holland during an 11-year reign as England captain that included the winning of the first (Hayward-sponsored) World Cup.

She played in an era in which players had to raise the money for themselves to travel abroad and her link-up with Sir Jack in the early 1970s was surely one of the biggest breakthroughs women’s cricket has ever made. Many of her latter decades were spent raising funds for those less fortunate.

She also campaigned feverishly to challenge the MCC’s archaic rules and bring about the admission of female members, which may explain why Eleanor Oldroyd and Alison Mitchell were among the invitation-only gathering yesterday afternoon, along with a third 5Live Sport voice, Pat Murphy.

Less well known is the fact that when she stepped in to cover a match at Molineux during her local newspaper days around 50 years ago, the press box was men-only and she had to be accommodated separately on the front row of the Waterloo Road Stand.

Rachael preferred to play rather than watch then and was actually a double international, her alternative journey stretching from Tettenhall Ladies Hockey Club to the England side. She started out as a right-winger but her love of Bert Williams in a Wolves team she first latched on to when she and her family crowded round a wireless to listen to the 1949 FA Cup final was a catalyst in her switching to goalkeeper, clad in pads.

She followed that Wolves victory by dashing out to buy the famous ‘It’s Ours’ old gold edition of the Sporting Star, a girl of Penn who Wolves secretary Richard Skirrow described in his superb address as ‘Wolverhampton-born and Wolverhampton-schooled.’ “She was awarded the freedom of the city and was a tremendous ambassador for that and the club – and very proud of both,” he said.

John Richards offered his own memory before a service lasting just over 90 minutes, describing his fellow late 1990s Molineux director as a fun, talented, no-airs-and-graces colleague who had the gift of putting people from all walks of life at ease. Unless they insulted her birthplace, that is. “At one board meeting, we were discussing a foreigner we’d tried to sign,” he said. “The manager reported that the player had gone elsewhere and one of the other directors – based out of the area, I hasten to add – said: “Well, who can blame him? Who would want to live in Wolverhampton?” Rachael snapped back like a shot: ‘I would!’ I think it was the only time I saw her seriously angry.”

There are other memories aplenty…..like her brilliant speech-making to alcohol-fuelled, male-dominated audiences, the sight of her clutching both fists to her mouth in exaggerated excitement after Wolves had ripped into an early 2-0 lead at Barnsley, the cheeky banter she indulged in with fans on the North Bank when she appeared at Mike Bailey’s testimonial game in 1976, her habit of wearing her MBE only on Christmas Day and the advice she offered a fellow award winner before his own visit to the Palace by telling him how far it was safe to bow before he was in danger of head-butting the Queen. That someone was Bully, who was among her visitors to New Cross in recent weeks.

The daughter of PE-teaching parents who came from opposite sides of the country, Rachael did more than we will probably ever know. She performed PR duties for Patshull Park and La Manga golf clubs, served as president of the Lady Taverners for many years and had a holiday job in the sports shop business run by her hero Bert Williams. 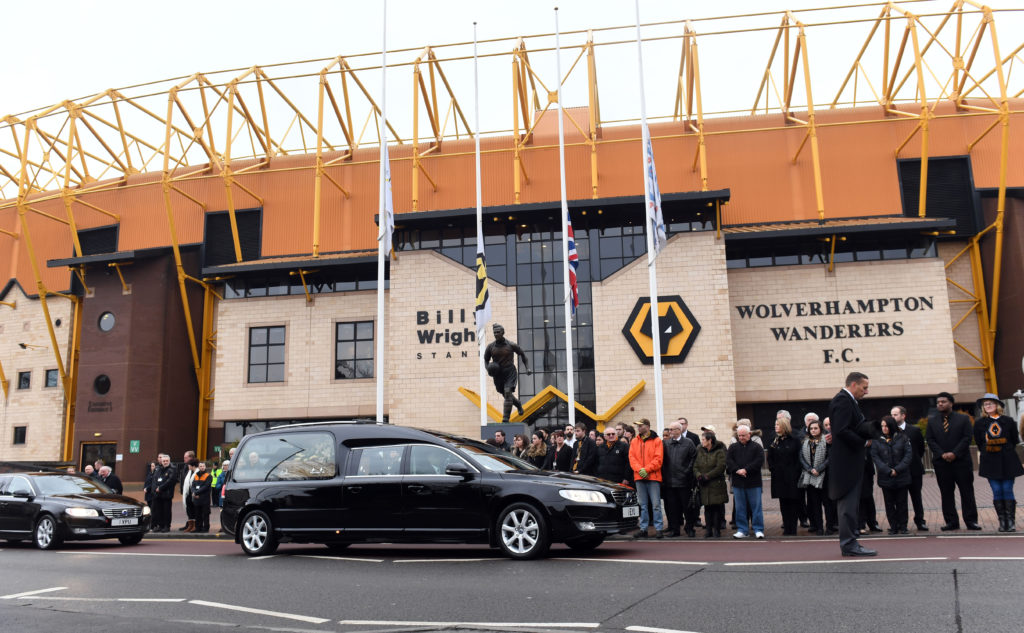 A final journey past the stadium she loved. Photos courtesy of Wolves.

She was also a strong family woman who leaves behind a 93-year-old widower, Derrick, son Benjamin and three stepchildren. Grandchildren Oliver and Giles gave a Winnie The Pooh reading in church and it was to them all that Richard Skirrow turned in church when using the phrase: “You have lost a gem.”

Richard went ‘in to bat’ straight after Angela Rippon had entertainingly exposed the story of what she termed a tearaway tomboy. In her ‘breaking news’ eulogy, she detailed some of the mischievous antics that may not have seen the light of day in the obituaries. “A long charge sheet,” as she put it, adding that Rachael’s biggest crime was stealing all our hearts. It takes a special person to encourage that sort of mickey-taking at her own funeral.

Judith Chalmers gave a Joyce Grenfell reading – Rachael once interviewed the entertainer – and there were celebrities wherever you looked in church and in Molineux’s Hayward Suite afterwards. She was every bit as comfortable, though, with the average person in the street……all the more so if they happened to be a Wulfrunian.