Keeping Souness In The Shade

Wing-Half Who Doug In For The Molineux Cause

Catching up with another of the young Molineux hopefuls from almost half a century ago was too much of a temptation for California-based Charles Bamforth. And when his latest target turned out to be someone who overshadowed one of the game’s very famous names, it made his efforts all the more worthwhile……

Think of the famous Scottish right-halves over the decades. I am thinking back to those times when the term would instantly conjure up thoughts of a tough-tackling grafter linking defence to attack with power and verve.

Bobby Murdoch would come to mind. Certainly Billy Bremner and Paddy Crerand. And, for many, the image would be one of Graeme Souness. Well, Wolves had a young right-half good enough to keep the ex-Liverpool star out of a Scotland no 4 shirt. His name: Doug Devlin.

“I played for Glasgow Boys against Edinburgh Boys, who had Souness in their side,” Devlin says. “I don’t think he was too pleased when I got the nod for the Scotland Schoolboys side to play against Northern Ireland.”

Doug was born in March, 1953 in Maryhill, Glasgow, close by Partick Thistle’s ground, although he was a Celtic fan as a lad.

“I went to St. Augustine’s School in Milton and became only their second pupil ever to play for the national boys’ team. When I played in that international in Ireland, a Wolves scout saw me and soon we had Joe Gardiner, the chief scout, knocking on the door.

“Celtic wanted me but I had enjoyed watching Wolves on television with the likes of Mike Bailey, David Wagstaffe, Derek Dougan and Peter Knowles, so, despite being a Celtic supporter, I went to Molineux.”

Young Devlin arrived as an apprentice and roared with laughter when my first question was: “So whose boots did you clean?”

“It was nearly 50 years ago!” he replied. After a moment’s hesitation, the answer came: “Bernard Shaw. Oh, and I think Derek Parkin. What I do know is that you could get pretty intoxicated with the fumes from the polish and the dubbin in that tiny boot room.”

Doug lodged alongside the South African centre forward Mickey Collins with ‘Ma’ Perkins on the Cannock Road at the back of New Cross Hospital. He counted Alan Sunderland, Barry Powell and Steve Daley among his pals.

“We lost in the semi-finals of the FA Youth Cup to the eventual winners, Arsenal, in 1970-1971 and had a great youth team that year.

“We had a young coach called Gordon Eddlestone who was learning his trade and I guess it was fortunate for him that he inherited such a good young team. Geoff Palmer and Peter Eastoe were others in the side.”

There was no cossetted grooming of the type the modern developing player might receive in the academy system. In Doug Devlin’s day, it was third and fourth-team football in the West Midlands League and the Midland Combination.

“That was a baptism of fire, for sure, with all these ex-pros,” he added. “I well remember my first ‘A’ team game, against Darlaston. That pitch wasn’t on a slope – it was on a hill!

“It was truly a game of two halves depending on which way you were kicking. You didn’t half wake up quick playing in those leagues. I did get into the Central League side but not very often.” 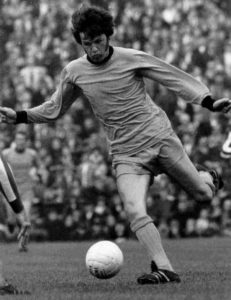 I asked whether he sensed the merest sniff of a first-team chance. “No way. There were so many excellent midfield players at Molineux: Bailey, Knowles, Danny Hegan, Mike O’Grady, Jimmy McCalliog, not to mention Paul Walker and Les Wilson, a true gentleman who could play anywhere.

“It was great to play five-a-side with those guys up above the old social club on Waterloo Road. Frank Munro and Hegan were brilliant in those sessions – of course, on a Monday morning, Sammy Chung had them wrapped in bin liners to sweat off their weekend excesses!

“I remember one day when I was kicking the s*** out of Peter Knowles. Sammy sidled up to me and said: “Leave off Knowles, would you? We need him in the team on Saturday.” I soon found myself playing in the same five-a-side line-up as Knowlesy!”

Devlin was still an apprentice at the time, signing professional forms in June, 1971. His prowess as a competitive midfielder who could read a pass (“but I was too slow”) attracted the Scottish scouts again.

“I played for my country from the age of 14 to 18 – for the under-15s, under-18 schoolboys (against John Richards’ England at Hampden – we won 1-0), under-18 amateurs and, when I was at Wolves, under-18 professionals. I captained that Scotland youth team, which included Willie Donachie, Joe Jordan, John Robertson, Alfie Conn……and Graeme Souness.”

Devlin loved his time at Wolves. “I met some really good guys,” he said. “The game is a lot faster these days – with my pace, I would not have kept up. But can you imagine playing now on the ploughed fields that the likes of Waggy had to work on? Places like The Victoria Ground at Stoke and the Baseball Ground at Derby.”

The competition at Wolves was intense and Devlin knew he was not going to make the first team. Bill McGarry released him on a free transfer in the summer of 1972.

“There was a sniff about Cardiff being interested but Walsall, being so close, were obviously more familiar with me and I signed for them,” he recalled.

“I went on as substitute against Charlton in the first game of the season but had quite the full debut, at Swansea, when I played in the no 4 shirt.

“The manager, that good old Geordie Bill Moore, told me to let Gil Reece know he was in a game. You could be a lot more physical in those days and I certainly let him know I was around. After one tackle, he nutted me and I kicked him back. The referee didn’t see what Gil did but did see me retaliate and I was sent off. Timing is everything!

“There were some decent players at Fellows Park. Nick Atthey should have played in Division One. There were Stan Jones, Stan Bennett, Bob Wesson as well.”

Doug played 18 Division Three games for the Saddlers, including three as a substitute, and added three appearances in the cups. His form was enough to impress his new Saddlers manager, the ex-West Ham, Spurs and Swindon player John Smith, and he later took him and Jimmy Dainty in July, 1973 to play in the League of Ireland for Dundalk.

“I loved my two years there, then I played for Raith Rovers before going part-time with Telford under Geoff Hurst. It was on to Tamworth, Alvechurch and Rushall Olympic after that.

“The time at Alvechurch was very successful. We won the Southern League in 1980-81 and the club’s name appeared on the shield alongside Tottenham, Fulham and Queens Park Rangers. Our centre-forward was Alan Smith, who went on to Leicester, Arsenal and England.” 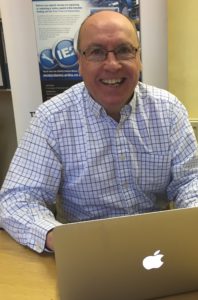 For over 30 years, Doug Devlin has worked in publishing and exhibitions. He is one of the owners of DFA Media and loves it.

“I loved playing football and having the opportunity to work with top-class professionals,” he says. “But then I was blessed to find another career that I enjoy immensely.

“People ask me when I am going to retire. I always say how can I? There are five women in my life: my wife, Tricia, who I met when I worked with the Birmingham Post and Mail 30 years ago, three daughters…and even the dog is female!”