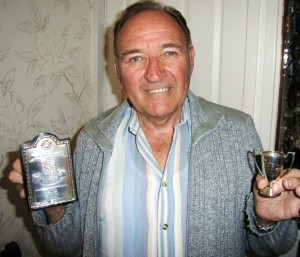 Wolves Heroes have been saddened to hear of the passing-away of Les Cocker, one of the surviving members of the Wolves side who made spectacular FA Youth Cup glory almost 60 years ago.

Les, 77, had been suffering from dementia but died peacefully in his sleep at the home in Newport, Shropshire, he shared with wife Wendy.

He played at wing-half in the epic games against Chelsea in 1957-58 when Stan Cullis’ Wolf clubs hit back from a Jimmy Greaves-inspired first-leg 5-1 thrashing to run riot to the tune of 6-1 in the return, Ted Farmer netting five of the goals.

Disappointingly, he played only one game in Wolves’ first team but had a fine career on and off the pitch when moving to South Africa and also did the non-League circuit back in England while making his way in the engineering industry.

Granville Palin, captain of that heroic Youth Cup final side, passed away in September.

There is no news as yet of the date of Les’s funeral.