As recently as last weekend, we presented a feature on Paul Moss, with the promise that part two would follow on his younger brother, Craig. Charles Bamforth is the interviewer once more and the man who tracked them down. 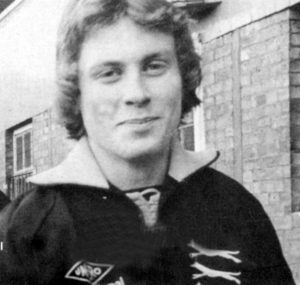 Craig Moss in his mid teens.

Few and far between are the players who have appeared in a club’s first team in four successive seasons but only on a solitary occasion each time.

Maybe that statistic gives Craig Moss a unique claim to fame in the gold and black of Wolverhampton Wanderers.

He was quick to get into the left-winger’s no 11 shirt in the days when a number meant something and was still an apprentice when John Barnwell gave him his first chance on November 11, 1978. He was 17 years and eight months old.

His final appearance – on January 23, 1982 – was at the still tender age of 20. What might have been had the financial outlook at Molineux not represented a minefield?

Craig Moss was born in Moseley and said: “Like my older brother, I attended King’s Norton Grammar School. Paul was a later developer as a player than me, so he stayed on to do his A Levels. But I was interesting teams when I was 14 or 15, so I left after doing my O Levels.”

Craig was no slouch, passing 11 of his exams, but he was already intent on a career as a professional footballer.

“Each holiday, I would go to one club or another,” he added. “They included Queen’s Park Rangers and Everton. I scored a 25-yard free-kick at Villa Park against a Villa schoolboy team playing for Northfield Terriers.

“They were coached by Ted Langford who took me on trial to Leicester and Villa as he scouted for both. Later, Arsenal showed interest and also Birmingham – but no way was I going to St Andrew’s, being a big Villa supporter.

“Brian Little and Andy Gray were my heroes. Villa started to show more interest but, when it came to it, I was reluctant to go there because Gary Shaw was obviously the golden boy. That put me off.

“I had been spending time at Wolves since I was 14 and they guaranteed me an apprenticeship, so that was a big factor. Mind you, Wolves had their own golden boy in Wayne Clarke and he had good advice from all those brothers who played and he was guaranteed a contract as a full professional. I actually bumped into him not long ago in West Park.

“At school, I played centre midfield. I was quite big for my age. But I seemed to stop growing at 15. Wolves saw me as a left-winger as I had pace, and that was probably to my downfall, as wingers were going out of fashion.

“I played for the school and for the district and county sides and my teachers nominated me for the England Schoolboy side but I didn’t get much further with that.

“But I did get into the England youth team when I was at Wolves. Our skipper was Mark Proctor, from Middlesbrough, and also in that squad were Clive Allen, Mark Falco, Rob Hindmarch (who went to Wolves over a decade later), Steve Cherry, Gary Mills and John Lukic.

“The manager was Brian Clough, assisted by Peter Taylor. Mr Clough could never remember anyone’s name and he used to shout out ‘Well done, Wolverhampton’. We won a tournament in Las Palmas, beating a Russian team in the final. I crossed for Mark Falco to score the winner in the last ten minutes or so.

“I went to England youth trials with John Humphrey, who was probably my best friend at Molineux. We played against one another in the trial games and I guess I got the upper hand. I got in but feel guilty he didn’t.

“We had a very good youth squad at Molineux. Apart from John, there was Mick Matthews and later Mick Hollifield and Hughie Atkinson came along.

“Although I was good friends with these guys, I didn’t live in digs with them, instead travelling in from home in Birmingham with my brother or Bob Coy. 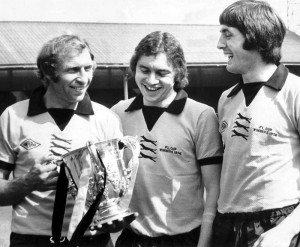 “There was huge competition at the club. When I first arrived, there were blokes like Jimmy Kelly and John Farley competing for the no 11 shirt. I recall that in training my kit had number 42 on it.”

Craig might like to ponder that, according to The Hitchhiker’s Guide To The Galaxy, 42 is the ‘answer to the Ultimate Question of Life, The Universe, and Everything.’ But I guess, to a youngster who signed professional forms in March, 1979, that would have seemed ambitious!

“I did get into the Central League side quite quickly,” he said. “It was Brian Garvey who took a shine to me and pushed me forward.”

And so the youngster found himself on the left wing for a debut against his boyhood heroes Villa at Molineux on November 11, 1978, replacing future million pounder, Steve Daley.

“It was a bit of a confidence shatterer to be honest,” he admits. “I was up against John Gidman. I could have started with an easier one!”

“At that time, John Barnwell and Richie Barker held a first team v reserves game every day and nine times out of ten, the reserves won! I guess we had the greater motivation.

“To be honest, I felt a bit guilty I had got into the team whereas my older brother didn’t. Paul deserved the chance more than I did, although he went on to a successful career in the League, especially with Hull.”

Moss’ second senior appearance came on the Monday before the triumphant League Cup victory over Nottingham Forest in March, 1980.

“We had been training at Castlecroft in the morning with a lot of running, which had tired me out. Someone got injured so I got the call – again against Villa. This time it was at Villa Park and we won.

“Dave Thomas was there and helped me a great deal. To be honest, though, I was a bit of a confidence player. I did better on good pitches with better players.

“Some would call me a luxury player, I suppose. What I really needed was a run of games. I had a good one in my next game (in April, 1981 against Manchester City), although we lost 3-1. Barnwell said: ‘You were our best player’ and hinted I would stay in. The team were at the wrong end of the table, though, and I went back to the reserves.”

“By now, I guess I was falling out of favour,” he said. “Ian Greaves came in and the club were in a financial mess.

“Paul Butler was coming through in the youth team. At the end of the season, Mr Greaves kept the core of the senior squad and the youth players but let go everyone else.

“My brother was at Scunthorpe and asked whether I really wanted to play in front of two or three thousand in the Third or Fourth Division or get a better living by going for a full-time job and playing part-time.

“Plymouth, Torquay and Halifax came in for me but I took Paul’s advice and went to Worcester City. They promised me a trainee accountant opening but couldn’t really guarantee it. 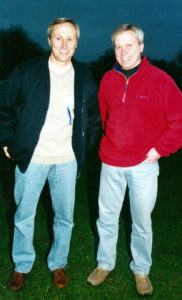 A last word for now on Molineux’s Moss Bros…..Craig (right) and Paul. Photo by Julian Pugh.

“But I did go into accountancy and, after Worcester, I played for Trowbridge. I was married now and our two children had arrived. I was taking my accountancy exams and working full-time.

“So I stepped down a couple of levels, playing for Redditch and Stourbridge. By the time I got to 25 or 26, I was finished. Looking back, I should have carried on.”

Craig Moss has, however, thrived in business, notably in the world of brewing with the likes of Enterprise Inns, Mitchell and Butler and, nowadays, Marston’s.