All Change – And Deemed Legal

Liverpool Rotation Did Not Save Surprised Wolves 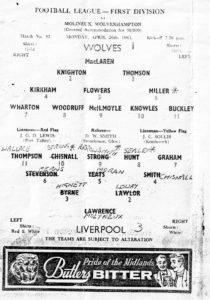 With the semi-final draw made, we may have passed the rounds in 2016-17 in which squad rotation is seen as a controversial, thorny issue in the FA Cup.

But Wolves supporters might be interested to be reminded and in some cases learn of the time Bill Shankly made big headlines by spectacularly ringing the changes before an end-of-season League game at Molineux in 1964-65.

Liverpool had never won the Cup at that time and, as distant observers of the title race going on above them, decided that conserving some strength for their Wembley meeting with Leeds five days later was more important than tackling a struggling side.

Wolves had experienced a season even more troublesome than the present one, in which they are still listed by Betway at 18/1 to drop into the third tier. They were already doomed to relegation despite coming off the back of a convincing home win over Sunderland that was secured by a hat-trick of Bobby Woodruff headers. That said, they appeared to be guilty of easing up at the end of a remarkable Monday.

Shankly had taken the trouble to ring his counterpart and fellow Scot Andy Beattie to inform him of his team selection and the reasons for it, partly because he didn’t want the Wolves faithful to be conned into thinking the likely Wembley line-up would be on view.

As a result, only 13,839 turned up and they were rather busy when the changes were read out over the public address system. Liverpool fielded a virtual Central League team, containing four League debutants.

One of the quartet was the appropriately named Bill Molyneux. Another was John Sealey – sandwiched between Alf Arrowsmith and Geoff Strong among the list of scorers, with George Miller briefly restoring hope for Wolves by crashing home from 15 yards following Ron Flowers’ free-kick soon after half-time.

There was talk of Liverpool being in trouble for fielding a weakened team but the fact they so comfortably won 3-1 on their way to an inconsequential final placing of seventh dissuaded the Football League from taking action. 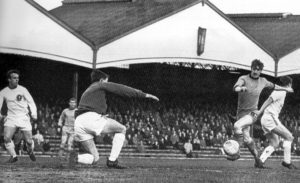 A rare moment of concern for Liverpool during the last League game of 1964-65 as Hugh McIlmoyle shapes to shoot. Photo courtesy of Liverpool Post & Echo.

And Beattie had no complaints, saying he would have done the same as his good friend, Shankly, in similar circumstances.

As Wolves licked their wounds at the end of their stay of 33 successive top-flight years, 17 out of 26 of which brought them top-six finishes, Liverpool went on to further justify their thinking in front of the live BBC cameras.

They beat Leeds 2-1 and continued the glorious Shankly era which had been kickstarted by the wining of the League crown in 1963-64.