Title Winner Who Appeared Under Cloak Of Secrecy 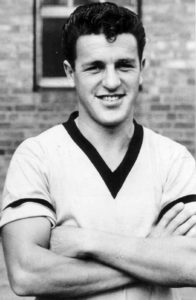 Micky Lill in front of the Waterloo Road Stand.

Curiously, the press write-ups of the 1957 Molineux friendly contained considerable criticism of the fact there were no announcements about the substitutes Stan Cullis used, one Fleet Street reporter, David Williams, kicking off his piece off by revealing that the ‘numberless inside-right who finished this thriller was 20-year-old Michael Lill.’

It is easy to suspect the writer had a London bias as he flagged up how Wolves, who always seemed to prevail in those marvellous early floodlit years, ended with ‘an all-West Ham right-wing pairing’, no 7 and ex-Hammers man Harry Hooper hitting one of the goals in a 4-3 victory.

Lill, whose competitive Wolves debut was still nine months away, actually replaced a replacement against the Germans, going on for the injured Bobby Mason, who had, in turn, taken over from the outstanding Jimmy Murray.

Somewhat mysterious and unscheduled his appearance on that Wednesday night in March may have been but Lill flourished from the unusual beginnings into a very worthy first-team player.

The Romford-born winger – hence the dart he had at Upton Park as a boy – needed another string to his bow; patience.

Cullis admitted he had received more than one letter telling him it was time he gave the former England youth international his chance – not least when he and Colin Booth formed an impressive right-flank partnership in the reserves the previous week.

When opportunity knocked in the League side, though, in the first game after the departure of Dennis Wilshaw, it was as a stand-in on the left for Jimmy Mullen rather than for Norman Deeley on the opposite side.

And Lill followed up his two and a half years of Molineux waiting by scoring in the first minute against title rivals Preston at Deepdale. His emergence, which came around the time of Hooper’s sale to Birmingham for nearly £20,000, was followed by a clinching goal from Murray as North End’s 16-month-long undefeated home record fell.

Such was Wolves’ strength in depth that Lill didn’t appear again during this championship-winning campaign but he was highly impressive when the title was retained 12 months later, his 12 goals in 18 League matches containing a spring-time hat-trick at home to Albion and braces in wins at Newcastle and Preston.

His heroics played no small part in the success and were neatly rounded off when he also netted on the April night the last mathematical doubts were removed, although the fact Leicester’s players welcomed Wolves on to Molineux with a guard of honour and major rivals Manchester United had already sent a congratulatory telegram suggested the job was already done.

There was another entry on the score sheet in the FA Cup victory at Barrow that we featured on these pages a few weeks ago and Lill kicked off the new campaign with a goal in the Charity Shield success over Nottingham Forest and high-scoring League spectaculars against Arsenal and Manchester City.

But the arrival of Des Horne as a first-team regular dried up the openings, with Deeley switched back to the right. Lill became exasperated at his return to the reserves. 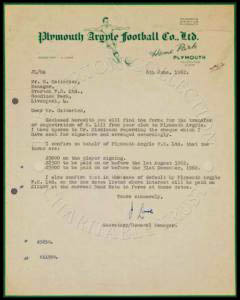 The paperwork that smoothed the way for a move to the south-west.

In the February of that season, he moved to Everton and shone further with a side on the up. Twice in a Goodison Park stay of more than two years, he helped secure successive top-five finishes and totalled 11 goals in 31 League outings.

Unfortunately, come the time of the Merseysiders’ title conquest of 1962-63, he had joined Plymouth for the unusual knock-down price of £11,400 amid fears he had a dodgy knee.

Stoke and Luton had also been interested in him and he made an immediate impact at Home Park by once more building a one-in-three scoring record.

Then he had more problems with that suspect joint and he was less settled following the signing of Peter McParland from Wolves in January, 1963.

Lill stayed on the south coast by fixing himself up with a move to Portsmouth and his first goal for them came in a home defeat against Scunthorpe – a game that pales by comparison with the brace he scored in a 6-3 win at Leyton Orient the following October from 3-0 down.

Steve Rhodes is an Argyle fanatic and historian and recalls seeing the winger when going to Home Park to collect autographs during the Easter holidays.

“I was 14 when he left and I can recall reading in the paper that he was training with Argyle while playing for Pompey,” he said. “All I remember is him sitting on top of the dug-out watching the rest and barracking.

“It always comes back to me when I read of a player training at his old club, although it doesn’t seem to happen often these days.”

Most of the player’s games while at Fratton Park were on the left wing but he switched to the right before being sold to Guildford City in the summer of 1965. His seven goals in 43 Pompey matches was substantially more modest than his Plymouth record of seven in 21 League games.

We can offer further personal insight into a man who subsequently joined the exodus to South African football and made his home over there for the remaining four decades of his life.

His nephew is Simon Pagett, who in 2009 formed the Molineux-based Synaxis graphic design consultancy and was behind the lay-out on the hugely successful They Wore The Shirt book project with which we were also flattered to be involved.

Simon’s love of all things gold and black has seen to it that he is in possession of various of his Uncle Mick’s football keepsakes, among them a cigar box to commemorate participation in the match against Wolves that marked the switching-on of Celtic’s floodlights, even a Coca-Cola bottle top with his relative’s face on.

“My dad’s sister, ‘Paddy’, married Mick in the late 1950s,” he told us. “Sadly, she has passed away but was from Wolverhampton, as I am. Her parents used to run a bakery and café in Codsall. 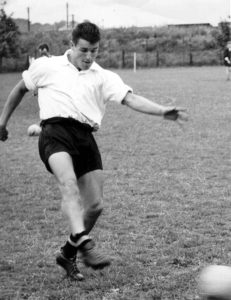 Micky training during his Molineux stay.

“Many of the items came via Mickey’s son, my cousin Ian, who was born in Wolverhampton but moved to South Africa with Aunt Paddy and Uncle Mick when he was very young.

“In the collection, there were also mementos from an international youth tournament in Gelsenkirchen in 1954, a Central League winners’ medal, caps, badges and other medals, including the one he won when Wolves were League champions in 1958-59.

“As a keen Wolves fan, I am obviously very proud of what he achieved, here especially, and delighted that a few of his honours are safe with me in the city.”

He was later involved in physical education work at a school in Johannesburg and died in 2004, aged 68.