Filling In Some Gaps On Giant Keeper

Tall And Promising – But No Way Through For ‘No Chance’! 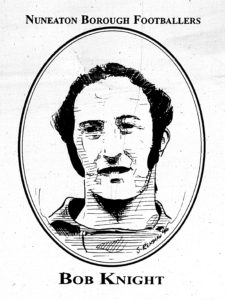 Our readers will be well versed by now in the lengths Charles Bamforth goes to in order to write about not only those who made the grade at Molineux but also those who fell by the wayside. Here, he uses various former Wolves players to present a posthumous tribute to a keeper whose name might be familiar to us from those dusty 1960s programmes…..

“Big, tall lad, dark hair.” Such was the initial response of Fred Davies, Jim Barron and Phil Parkes to my mention of the name, ‘Bob Knight’.

They were three of the other keepers at Molineux at the same time and it is not surprising they didn’t have too many memories of him.

“We goalkeepers didn’t really train together,” Barron said. “Yes, Fred and I would come back in the afternoon and do extra work but training was alongside all the other players for the most part and consisted of them wellying the ball at you from six yards.”

Parkes was another who went back for extra work and he pointed out that Bob was a bit older than him and they didn’t really get to interact. “There were Fred and Jim, later Dave Maclaren and then Bob Knight in front of me,” he said.

Davies added: I did my specialist stuff with Bert Williams. I’m not sure Bob received that. He seemed good enough, though. There were just too many keepers there for him to get his chance. Remember Bob Wilson was also there as an amateur.”

Jim Barron again: “Bob was really tall for a keeper in those days. There weren’t many that big.”

Indeed, it was regularly stated in match-day programmes that Wolves had four keepers over 6ft – Maclaren, Davies, Knight and Parkes.

More often, Fred is listed as an inch shorter than that but it was nonetheless deemed odd that Wolves had so many ‘giants’ at a time when many a keeper was 5ft 10in or shorter. Knight was 6ft 3in and was listed as weighing 13st 10lb at the age of 22. 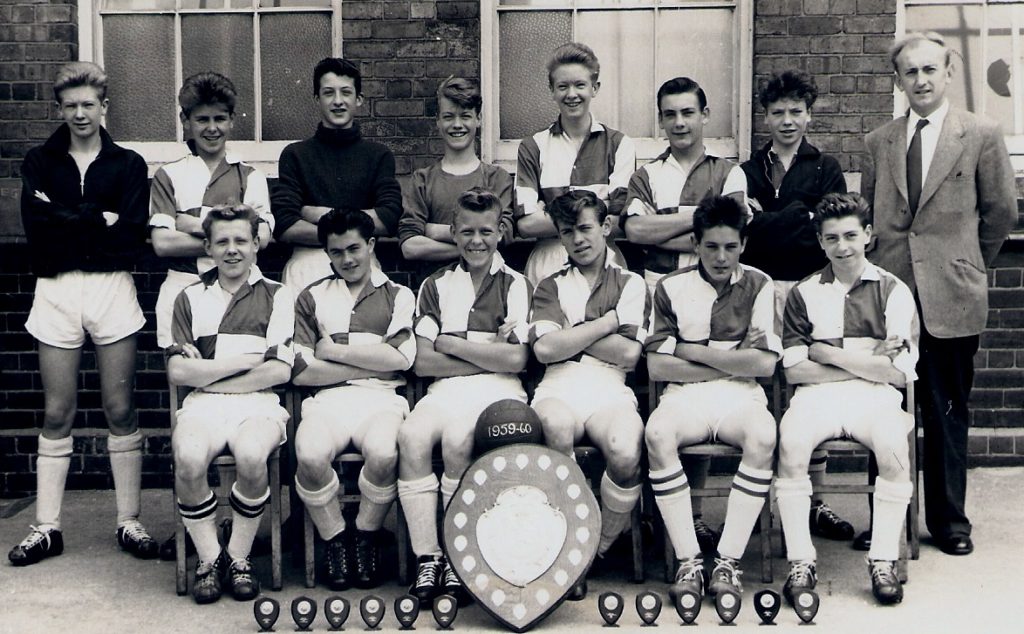 Graham Hawkins, with the ball at his left thigh, and keeper Knight, in his dark polo-neck jumper, on the back row.

Bob Knight was born in Willenhall on February 18, 1946. He attended Short Heath Secondary Modern and was a member of the South East Staffordshire team who won the Birmingham County Intermediate Shield in 1960, with Graham Hawkins among his team-mates.

Bob and Graham arrived at Wolves around the same time. West Brom and Birmingham were both keen to sign Knight but Molineux was closer to home. He signed amateur forms and became a full-time professional on his 17th birthday.

A Wolves full-back from that era, David Cooke, offered this memory: “Bob was a very competent keeper and it was unfortunate for him he had Phil Parkes as competition.

“Bob was a good friend of Allan Clarke. We once played against Walsall Reserves in the Midland Intermediate League – at Castlecroft if I remember right. We won, 6-5 with Allan scoring all five for Walsall. Unfortunately, Bob didn’t have one of his better games against his pal.

“However, he did play well in the quarter-final of the FA Youth Cup against Manchester United at Old Trafford in 1963-64. They had many good players, including John Aston and David Sadler, who both played in the European Cup winning team a few seasons later.”

Utility man Les Wilson recalls: “I played with Bob in some Worcestershire Combination games, as well as in the Midland Intermediate League. He was slender and well over 6ft, I am sure of that. He seemed to be very respectful, a good trainer and dedicated.”

Knight’s name was mainly to be found in Wolves’ fourth and third teams, although he advanced to the Central League side under the watchful eye of the legendary Molineux coaching staff.

But, by the time the lamentable 1964-65 season was coming to a close, it was clear the 19-year-old was not going to be making headway as competition for Maclaren and Davies – with Phil Weir now coming in to join Lofty Parkes among the younger element.

It was the player’s cue to go part-time and work by day as a shop fitter. He chose to play for Wolves’ near neighbours Wellington Town (later Telford United).

There were big shoes to fill when he arrived at the Bucks Head in May, 1965. Bert Trautmann had been appearing for Wellington at a wage of £50 per game.

The great German’s first appearance was at Hereford and his second at Tonbridge, where he was sent off for violent conduct. He never played for the club again! 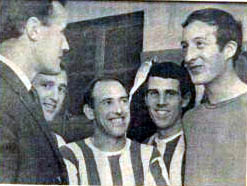 Hello again…..Knight (right) meets up with Dave Maclaren (left) at Worcester. Next to the younger man is one-time Wolves boy Harry Middleton.

The other keeper Bob was competing with at Wellington was Mick Richards, the latter’s broken arm giving him the chance to demonstrate his worth.

His form was sufficient to have other big non-League clubs calling and it was Worcester City who paid a £250 transfer fee to take the young giant to St George’s Lane in October, 1969 after Knight’s position in the Wellington goal was challenged by Northern Ireland international Bobby Irvine.

Ironically, Bob was signed to replace Dave Maclaren, who had been appointed to a coaching job at Molineux. Worcester club historian Julian Pugh told me: “The small fee was a great investment.

“Bob performed very consistently over a six-year period and at one stage went nine matches without conceding a goal. After breaking an arm, he was released to join Nuneaton in the summer of 1974.”

Kev Brown speaks glowingly of Bob Knight’s time in Warwickshire. “He was one of my favourite players when I started to watch the Boro as a young boy. He was a great keeper and a true club legend.”

The cigarette-style card at the top of this article spells out succinctly what Bob Knight meant at Manor Park. Julian Pugh added: “Bob came back to Worcester as temporary cover towards the end of 1978-1979 season. In all, he made 343 first team appearances here. Sadly, he died young, of cancer, in the late 1990s.”

Ray Aggio enjoyed playing alongside Bob Knight for both Wolves and for Worcester and said: “When we were at Worcester, he and I travelled together for training on Tuesday and Thursday evenings. We also had full-time jobs. 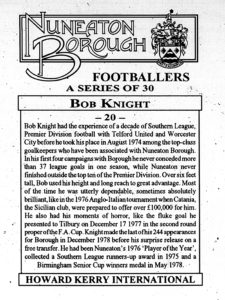 What might have been……if those admiring eyes from Italy had stayed around.

“He had the nickname ‘No Chance Knighty’ because if you asked him to do or give you anything, he would say ‘No chance’ before you could finish what you were asking.

“He was a good keeper who was good fun to be with. He died far too young.”