How Flowers Sprang Up Gloriously – Twice 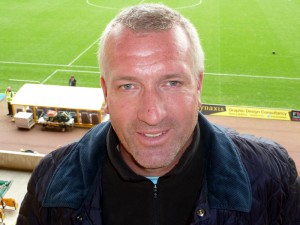 Tim Flowers back at Molineux several years ago.

From their Wolves days together, John Burridge knew through painful experience that Tim Flowers posed a huge threat to his first-team prospects. The duo’s subsequent presence side by side at Southampton merely underlined the fact.

The young pretender’s rich potential had played its part in the senior campaigner’s departure from Molineux in 1984 and was a strong contributory factor behind both his and Peter Shilton’s farewell to The Dell in the following years.

Flowers bloomed big time in becoming Britain’s most expensive keeper, an England international and, in the unlikely surroundings of Blackburn, a League title winner.

Wolves can be proud that they set him on his way with 72 first-team appearances during the most trying seasons any club could have faced.

But that was only the start of his story and, as a way of checking out the friendly later-1980s rivalry between the two, we consulted Chris Nicholl – had a coffee with him near Walsall, no less – and enjoyed the insight he offered.

“I remember signing Tim from Wolves for very little,” the 70-year-old said. “He was in their reserves at the time and I drove straight up after training to watch him in a Central League game.

“I liked what I saw. He was young and a good size and I thought he could develop into a very good keeper. I had played in front of Budgie at Villa and knew all about him and what a good trainer he was, although obviously very eccentric.

“But, like Shilts, he was getting on a little and I saw Tim as one for the future – and more the size I liked a keeper to be. I decided almost straightaway that I would like him and we took him quite early in the summer, if I remember right.”

Flowers was Sammy Chapman’s first choice between the posts during the bizarre seven-game run-in to a third successive Wolves relegation…..a closing stretch containing a joyously celebrated win at Blackpool, the customary home defeats, a whacky 5-3 loss at Wigan and a finishing victory at Lincoln two days later that at least left Swansea clutching the wooden spoon.

The 19-year-old had already had a loan spell with the Saints and joined them permanently for a knockdown £70,000 – further outstanding business by a manager who also recruited Matt Le Tissier and Alan Shearer.

He had enjoyed understudying Shilton and continued to have a close-up of him while having to be content largely with reserve football, his debut in mid-September being marked by a harrowing 5-1 defeat at Manchester United.

He took over from the England legend again in a home game against Arsenal two months later – and this time he conceded four without reply. Game no 3, at home to Norwich three months later, was also lost. Talk about a difficult start…..

A six-match run in the side at the end of the season continued two wins and four draws, though, and Flowers was up and running.

“I played Budgie plenty the season after when Shilts had gone to Derby for £1m and just brought Tim through gradually,” Nicholl added.

“I thought that was right for him and I was very pleased and proud that he became such a top keeper.

“John was really good with him and loved coming in for extra training, so he set a good example.”

Burridge admits in his autobiography that he regretted joining the Saints when he left Sheffield United but played 62 League games before joining Newcastle in 1989, Nicholl having warned him that his opportunities would become fewer if he didn’t sign a new deal.

It wasn’t only fellow keepers who were taken under Burridge’s wing and helped out, as he had done in his successful Molineux stay from 1982 to 1984. The Burridges also paid Shearer a fiver a time to baby-sit their kids, Thomas and Katie. 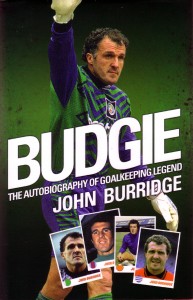 No-one will be surprised that this is a highly entertaining read.

“Around the same time I was arriving at Southampton, they also brought in Tim,” he wrote. “They essentially bought him as one for the future and to replace me in time.

“But, although I was the top dog on paper, and Tim had been signed as a future prospect, I felt my first-team place was never too secure because he had really matured at Wolves. He was an excellent up-and-coming keeper, more than ready to step in.”

It was after the former Villa man had joined Newcastle that Flowers really established himself at The Dell, staying for another two and a half years following Nicholl’s departure and impressing Graham Taylor sufficiently to win the first of his 11 England caps.