Salt Of The Earth – And The Seas! 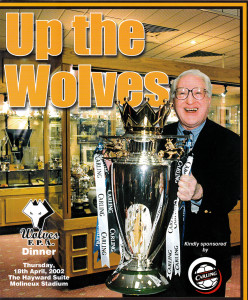 Sir Jack in his favourite domain.

Sir Jack Hayward’s remarkable down-to-earth nature has been underlined in a new book written by a veteran of the Midlands media circuit.

Tom Ross has gone into print in celebration of his 35 years on the radio airwaves and uses the sections on Wolves to tell us a little more about the much-loved and much-missed former Molineux benefactor.

Post-match audience participation has always been part of the author’s world and it was such a platform that brought him a surprise call some years ago.

Ross writes: “I remember being in the middle of a volatile post-match phone-in when my producer ‘Salty’ said: ‘The next caller is Jack, a Wolves fan.’

“I went to him and was amazed to find it was Sir Jack Hayward calling from his boat in the middle of the ocean off the Bahamas. He had been listening to our commentary of the Wolves game and had called to say how much he had enjoyed it and to talk about it, just like any other fan.

“What I found endearing was that he didn’t come on to our phone answerer saying: ‘I am Sir Jack Hayward, owner of Wolves, get me on.’ He just waited in the queue like anyone else.

“He was a top man and I was privileged, proud and honoured to be invited to his funeral in Wolverhampton.”

Ross, to his credit, also uses the 248-page paperback ‘The Game’s Gone’ to say sorry for an unfortunate piece of commentary from Albion’s League defeat at Molineux in 2006-07.

With Baggies legend Tony Brown at his side, he famously referred to Mick McCarthy’s introduction of Jay Bothroyd as a substitute as great news because the striker was ‘useless’.

Brown saw the danger signs in the comment and the commentator was left eating his words when the forward rifled in the only goal of the game late on. 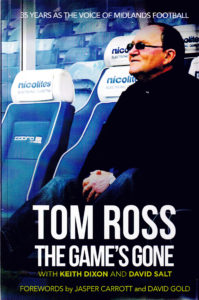 Tom Ross on the cover of the book he has brought out this season.

“I was mortified….I was disrespectful to Jay Bothroyd, a professional footballer, and it was not my place to say it,” admits the BRMB and Free Radio broadcaster.

“I wrote to him apologising and, to be fair, he said it didn’t matter…..I suppose because he had had the last laugh. I learned a very valuable lesson that day: Just stick to describing what had happened.”

‘The Game’s Gone’ has forewords by Jasper Carrott and David Gold and is produced by DB Publishing. It costs £14.99.