A Class Apart – When 100 Caps Meant Much More

Billy Stood Out BIG Time Among his Peers 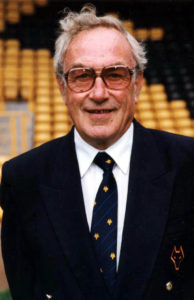 Billy in his time as a Wolves director.

Many a springtime contains a significant anniversary from Billy Wright’s majestic playing career but we are now on the eve of one of the biggest of the lot.

It is 58 years tomorrow since the skipper of club and country made history across the globe by becoming the first man in the world to win 100 international caps.

And we have delved a little deeper to give perspective to just what an extraordinary achievement this was.

It was in May, 1952, in a 3-0 win in Switzerland, that Billy overtook Bob Crompton and become the most capped England player with the relatively modest total of 43. He played on at that level for a further seven years, give or take a few weeks, and, boy, did he go on to set the bar very high for his successors!

Although Stanley Matthews was to total 54 caps and Tom Finney 76, one man stood absolutely head and shoulders above the rest – the one with that famous shock of blond hair.

No-one else in that era got remotely close to Billy’s tally of 105 – it was a colossal figure and one achieved at a time in which there were considerably fewer international games and no international breaks.

On the day of the 1-0 home win over Scotland that brought up his three figures, in fact, Wolves also had Ron Flowers and Peter Broadbent wearing the three lions rather than dressed in their club colours for a vital game at Bolton in the title race run-in.

That said, the other Wanderers had Eddie Hopkinson in goal for England and winger Doug Holden was given his international debut on the left wing, so both sides were hit hard and a 2-2 draw left neither nursing a particular grievance.

You can hardly begin to imagine the scramble there must have been for the Molineux trio to learn how their team-mates had fared without them at Burnden Park, with only five games left at that point.

But Billy was hugely consumed 200 miles away by the elation of his landmark, not least as wife Joy had presented him with a daughter six days earlier but been allowed out of hospital to attend the game.

“It was the greatest day of my England career,” Wright said. “Everything went to perfection.”

We have all seen the photos of the captain being chaired from the field by Don Howe and Ron Clayton at the end……what is less known is that the man at the centre of all the attention received ‘just thousands of telegrams and congratulatory messages.’ 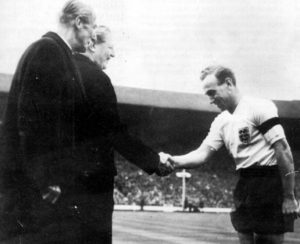 Congratulations from Prime Minister Harold McMillan on the occasion of cap no 100.

Things move on, though….they always do. And the scorer of the winning header against the Scots, a young Bobby Charlton, was the man who would go past Billy more than a decade later by winning his own 106th cap.

Bobby Moore, Peter Shilton, Frank Lampard, David Beckham, Ashley Cole, Steven Gerrard and Wayne Rooney have since done the same but we are in a different time. The goalposts have moved.

More games were being played even when the two Bobbys came along. Among his contemporaries from the 1940s and 1950s, though, Billy was absolutely a class apart.